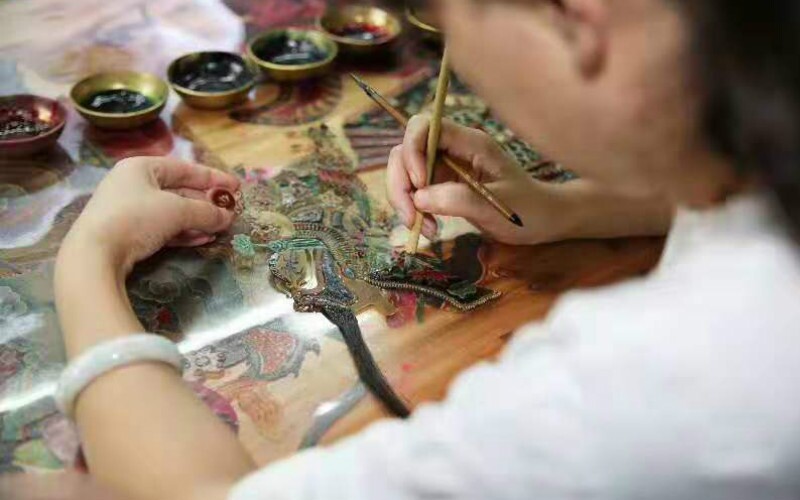 Puppet performances of various types were popular in China. There were several forms of puppet theater in China. It isn’t known which developed first. The Chinese puppet theaters come in four forms: marionettes on strings or wires, rod puppets, shadow plays, and hand manipulated glove-type puppets.

Marionettes on strings or wire like the old time Pinocchio or as in the picture to the right were once popular in the China before the advent of motion pictures.

Marionettes were usually carved from pieces of wood, and the assembled parts are hung on strings. Chinese marionette plays are mostly performed in the open air without a curtain to conceal the puppeteers, unlike the common practice in the West, and spectators can see both the performances and the performers from the three sides of the stage. In the West, the audiences usually expect the performers to be hidden.

There were religious aspects to Chinese marionette plays, and there might still be to some extent. Marionette performances or other types of puppet theater were often outside of temples or shrines and used for instruction of religion.

Chinese rod puppets are puppets that are manipulated by three rods as shown in the picture. The puppets may be small or even life-size. Performers used to wear special traditional theatric robes with big sleeves so that the rods were somewhat hidden, but modern performers tend to let their hands and rods show.

At a time when there was no flat-screen TV, people entertained themselves in the evening with shadow puppet theater. Shadow shows were once a popular form of entertainment, and they were also used for religious and instructional purposes. Simple to perform, dramas were played out on screens or walls for thousands of years to entertain and instruct, and shadow theater is still performed in China.

A simple lamp and a thin screen was all that was needed for a stage. Things like people, animals, furniture, pagodas, walls and plants were shown on the screen by placing figurines or figures made of cardboard or leather in front of the lamp.

The lamp illuminated the screen from behind, and people could move little figurines around for theatrical performances. With added music and sound effects, the performances could be quite entertaining if they were well executed.

These were ancient dramas or cartoons, and they were even colorized for added entertainment by using colored translucent figurines. The lamp light cast a colored shadow.

Glove-type puppets like the "Muppets" are quite familiar in the West. Glove puppets are still a common toy there. These were also popular in China since ancient times.

In contrast to shadow plays that were staged even in rough Mongol encampments or poor primitive villages, the stages for glove-puppet theater were often finely crafted. There were miniature palace courtyards with richly decorated buildings that for example had carved rafters and golden roofs. Nowadays, glove puppet plays are popular in Taiwan.

There are modern puppet shows of several types that you can see in cities around China. The more famous puppet theaters include: