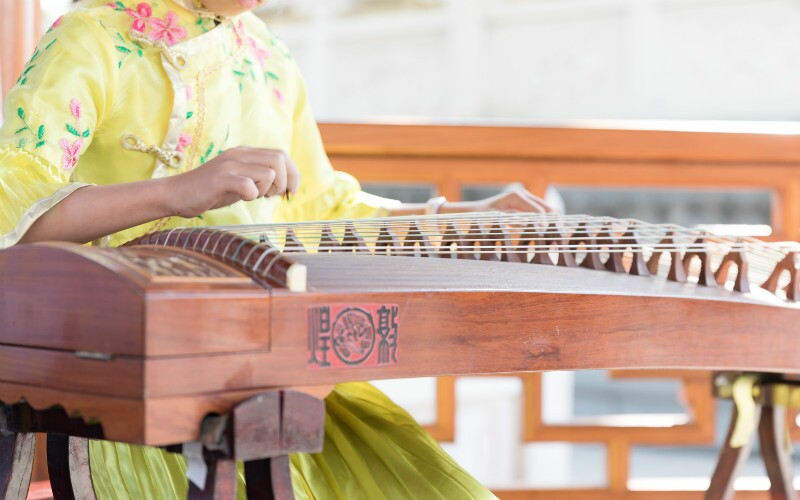 Confucius is said to have lived about 2,500 or so years ago. He is credited for setting the tone for much traditional Chinese music for thousands of years. He is thought that he was a prominent music teacher and a talented musician who was able to play several instruments expertly. He also was China's foremost social philosopher. In Confucian teachings, the purpose and role of music are laid out and the qualities of "good music" are defined.

Perhaps for other people around the world, music was meant mainly for amusement and entertainment. But during the time of the Zhou Dynasty about 500 BC and afterwards, music had the crucial role of an important pillar of society.

How music was meant to be used and performed is expressed in several of the main Confucian books (Analects 论语 Lún Yǔ), The Classic of Poetry 诗经 Shī Jīng, and The Classic of Rites 礼记 Lǐjì). The teachings are seminal for understanding traditional music.

“To educate somebody, you should start with poems, emphasize ceremonies, and finish with music.”

Musical knowledge was a matter of higher learning. It is said that he thought of the six most important subjects to study, studying music was second in importance only to the study of ritual or public ceremonies. He ranked music higher than the other four necessary subjects (archery, chariot-riding, calligraphy or writing, and computation or mathematics).

Music was so important because the ideal society was to be governed by rites, ritual and ceremonial functions, but not by law or raw power. In a culture where people function according to ritual and ceremony, music is used to help conduct and govern them. So music wasn’t really entertainment, but a means for musicians to accomplish political and social goals. Music was ultimately a means for optimizing social utility or happiness.

The Traits of Good Traditional Music

So to establish peace and initiate proper conduct, it was important that the music be generally simple, induce tranquility, and facilitate the appropriate conduct in the ceremonial context. The instruments should be played with correct technique as a model for proper behavior.

In official functions, to produce the proper respect for the authority and an optimal audience response, music should have a “magnificent beginning,” be “harmonic” and “clear,” have an easy structure, and be “smoothly continuous.” His aesthetic standard for music has influenced China in the last two millenniums.

In general, traditional musicians follow the Confucian doctrine. In order to perform the grand and “magnificent" entry of musical pieces advocated by Confucius, musicians in an orchestra or ensemble often begin their pieces with a grand flourish of all of them playing their instruments simultaneously for a few seconds or by loudly sounding a gong or drum. This signals that the piece has begun and gets the audience’s attention.

In the beginning flourish, you can hear which instruments will participate in the piece. An instrumental musician performing solo will often play a sudden loud note or notes at the beginning.

In a group ensemble, after the grand opening of the piece, the musicians will generally tone the volume down towards the middle. This enables the audience to appreciate the technical finesse of the individual musicians. At the conclusion of a piece, the volume generally increases again for the finale.

Traditional music emphasizes the precise elucidation of each note of an instrument, but there isn’t an emphasis on rhythm or Western-style harmony.

Most of the traditional music of the elites used the ancient Chinese pentatonic scale. The scale lends to making simple harmonies, but perhaps to maintain the Confucian norms of simplicity and clarity, harmony isn’t emphasized. In contrast, Western-style music uses the heptatonic scale that lends to producing complex harmonies among various instruments in tension.

Perhaps most pleasing to Westerners is a single instrument such as a flute or an erhu played with the traditional emphasis on precise articulation and inflection. Westerners often find such music tranquil or meditative.

Traditional musicians playing a variety of instruments in large ensembles or orchestras tend to sound discordant because Westerners expect more harmony in such performances. The Chinese pentatonic scale itself has sound frequencies that seem a little cacophonic to Westerners.

Unlike Western or African music, there is no emphasis on rhythm or beat. Traditional Chinese music isn't meant to be danced or moved to. That would tend to orient people toward bodily sensual and sexual drives. As Confucius taught, beautiful and appropriate music is meant to promote social tranquility.

If the music is a part of an official ceremonial function, the music is meant to regulate the behavior of the people so that they perform the ritual appropriately and obey authority.

In accord with Confucius' idea of music being "smoothly continuous," traditional music generally doesn't have sharp breaks in tempo.

However, instead of a regular tempo throughout, many pieces feature a regular but smoothly accelerating tempo. The tempo slowly increases towards a finale at the end. This connotes a river gaining speed as it cascades downwards, and this is often the rhythmic feature of traditional Chinese music.

Chinese opera music is meant to augment the operatic story, actors, visual effects, but the traditional Chinese ensemble and instrumental solo pieces are generally meant to calm the passions and dispel unrest. Despite the Chinese belief that music is meant not to amuse, but to purify one's thoughts, modern Chinese opera music is meant for entertainment. There are now several major types of Chinese opera, but the favorites are probably Beijing opera and Sichuan opera.

In general, a small ensemble of about seven musicians play at one end of the stage. Experienced musicians know the score so well that they can perform from memory.

The instruments include the erhu and other stringed instruments, wood clappers, gongs, cymbals, and wind instruments. The main function of the string instruments is to accompany the singing, but they are used to make special effects sounds such as animal sounds too.

Many works of traditional music are still played by ensembles and large orchestras. Nowadays, Chinese musicians in a traditional ensemble incorporate Western and modern musical styles. Even the instruments may be redesigned to play according to Western musical styles and are made from modern materials.

Non-traditional instruments such as a piano may also perform traditional music. So the music doesn’t sound exactly like the music played 200 years ago, but Western audiences will be intrigued by the differences in style and sound compared to Western orchestral music.