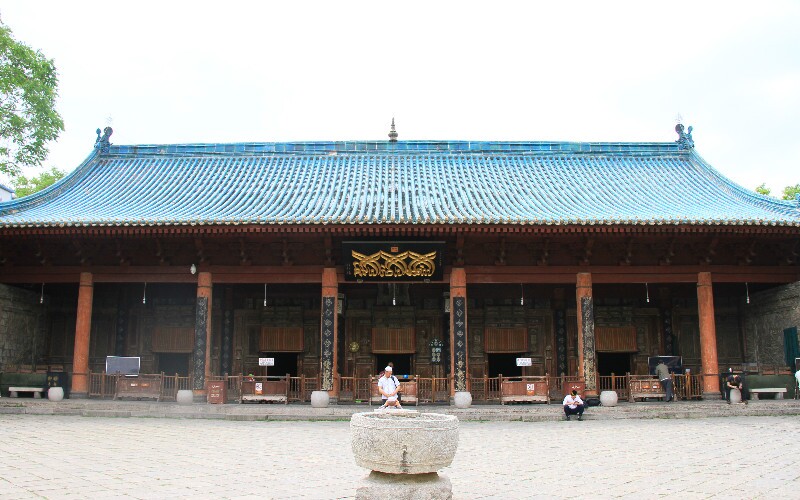 Xi'an Great Mosque is the largest, and one of the most important islamic place in China. Covering an area of 6,000 square meters, the whole complex can be divided into four courtyards. In the first courtyard, there is a wooden arch. The arch is nine meters high, with glaze-covered tiles, and can be traced back to the seventeenth century. Three chambers stand either side of the arch, in which is now displayed some furniture preserved from the Ming and Qing dynasties. In the center of the second yard stands a stone arch with two steles on both sides. On the steles are famous calligraphic writings from prominent ancient calligraphers. The fourth courtyard contains a big prayer hall which can accommodate over a thousand people. The mosque has become a famous tourist attraction in the Xian, which receive a lot of visitors each year. See our tours to visit this mosque

Location: It is located at 30 Huajue Lane in the center of the city.

The Xiaopiyuan Mosque was first built in the late of Tang Dynasty(618-907). It is one of the first masques in Xi'an.

Customize a muslim tour to Xian

The Dapiyuan Mosque was first built in the 9th year (1411) of Yongle, Qing Dynasty(1644-1911). The existing temple covers an area of about 3,333 square meters with a constructed area of 1,610 square meters. The prayer hall occupies an area of 354 square meters. It is a Chinese classical architecture. There are many big trees in the temple. The environment of the temple is quiet and clean. The temple keeps 51 Arabic Classic. There are 4 imams, 13 Xurdong and 5 Manla in the Masque. The Masque hold 480 households of Muslim people and the total population is the 4,000 people.

The North Guangji Street Mosque was first built in the late of Ming Dynasty(1368-1644) and was rebuilt in Qing Dynasty(1644-1911). The temple design combines Chinese nationality characteristic with Arabic temple style. The existing temple covers an area of 2,000 square meters with a constructed area less than 1,000 square meters. The major constructions are the prayer hall, Bunker building, south and north pavilions, bath house and other facilities. The prayer is 12 meters high and 13 meters wide. It is consisted by the Juanpeng, middle hall and the back hall. The Bunker building is a double hexagon shape with 13 meters high.

The Dongxinjie Mosque was fist built by Hui people in 1939 and was rebuilt for many times. The existing temple covers an area of 1,000 square meters. The major constructions are the prayer hall, teaching room, water house and other facilities. In the important festival, Eid al-Fitr Day and Id al-Adha Day, there will 3,000 to 4,000 local and foreign Muslim people taking part in the religious activities.

China Highlights are your China travel expert. We can help you customize a muslim trip to Xian.