The Yao Minority in China The Red Yao or Younuo of Longsheng

China's Yao minority classification has almost 3 million members and live among other ethnic groups in the mountains of southern China.

Tourists like to visit their beautiful terraced rice fields and tribal villages and to stay to experience their agrarian culture.

Where the Yao Live in China

The Yao live mainly in the provinces of Hunan, Guangdong, Guangxi, Guizhou, and Yunnan. About 60 percent live in Guangxi, and most of the traditional ones live in the mountains north of Guilin. They have adapted to living in the mountains. About 170,000 live in Yunnan.

They live among related ethnic groups such as the Miao and the Zhuang. Many live in Longsheng County, Guangxi.

Other languages: Most also speak Mandarin, and some even speak other ethnic languages such as Miao and Zhuang. Yao people use only Chinese characters for their written language. They do not have their own phonetic writing system. 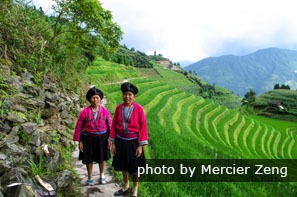 Yao women dressed like these have lived in Longji in northern Guangxi for 900 years.

About 2,000 years ago, the Yao were mainly hunters and gatherers. The Yao people originated in an area around Hunan and Hubei. But they faced pressure from the Han people, and they rebelled several times against the Ming Dynasty (1368–1644) together with the Miao (Hmong), and the people migrated southwards.

Some settled in northwestern Guangdong, but they were again attacked late in the Qing Dynasty era (1644–1912). So more Yao moved westwards into northern Guangxi and other Yao areas.

Some groups of Yao crossed into Laos, Thailand and Vietnam. In the 1970s, some were given the chance to migrate to Canada, France or the United States. A common Yao broth is oil tea (油茶 youcha /yoh chaa/) that is made by sautéing tea leaves in oil and adding water to create a soup. They mix in some salt, pepper and ginger. The soup becomes more nutritious when rice, peanuts and fried beans are added.

It has a fragrant smell and warms the body and enhances blood flow.

You can learn more about their food and those of their neighbors on Longsheng Food. 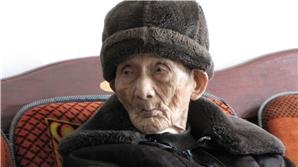 In the tiny village of Ping'an, 7 people are 100 years old or older.

Researchers studying the diet of the Yao in Bama Yao County in west Guangxi Zhuang Autonomous Region noted that they eat vegetables for every meal along with a lot of beans. Also, the water is alkaline, and there is little pollution. Ping'an in Bama is considered a "longevity village". The Yao there live unusually long and healthy lives. In Ping'an, of the 560 residents, 7 are aged 100 or more.

Blue and green hand-woven clothing is popular among Yao men and women alike. Men usually wear short robes without collars. They match these up with either knee-length shorts or long pants. Women like to wear jackets with openings on the sides together with shorts, long pants or pleated skirts.

Yao women also love to sew. They decorate their clothes with attractive embroidery that they usually add to their belts, hems and collars. They use bright colors in their designs. The Red Yao of Longsheng are so named because of their traditional red clothes. Silver jewelry: For special occasions and festivals, Yao women don shiny silver accessories such as silver flowers, hair pins, beads and plaits. The distinction between married and single women is apparent from their distinctive headdresses.

Religion: The Yao, unlike their ethnic neighbors such as the Zhuang, are strongly Taoist. Taoist rituals and beliefs define the community life for most traditional Yao. Taoism was originally a Han religion.

Yao people show great respect to their elders. Youngsters should not fail to greet older people when they meet outside. They should step down on the lower part of a road to make way for the elders. Even horse-riders should dismount when they encounter an older person.

Speaking the names of older people, crossing one’s legs, or using bad language in front of them are signs of disrespect. When eating, the best food should be closest to the most senior person. When eating together, younger people should give up their seats and serve food to older people.

Yao men almost always marry Yao women. Husbands usually live with the wife’s family. Yao people meet their future wives or husbands during festivals. A man and a woman who are courting often exchange keepsakes. These symbolize love and freedom.

Parents do not intervene when it comes to matchmaking. Some villages may require matchmakers to facilitate a meeting of the prospective couple, before a decision is made to marry. Yao houses are similar to Zhuang and Miao houses. Yao people normally use logs and bamboo to build their traditional houses. Others live in houses made with mud walls and tiled roofs.

Diaojiaolou ('drop-foot-buildings' /dyao-jyao-loh/) wooden stilt houses are popular among the Yao. They are built on pilings, and they sit above the ground.

Most Yao houses have two stories and three or five rooms. The first story is where they keep their farming tools and raise livestock in rooms that make by adding partitions among the pilings the support the house. The family lives in the upper story. Yao people are fond of making annexes and lofts for their homes. This makes the structure of the homes even more complicated.

Yao roofs often have curved horn-like projections at both ends of the apex. 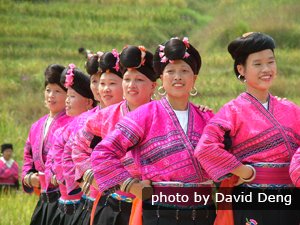 Yao have celebrated the Red Clothes Festival around May since the Yuan dynasty.

Although Yao people celebrate Han festivals, they also have their own. These include the Red Clothes Festival that tourists enjoy, Panwang, and Danu.

Panwang is perhaps the biggest event for Yao people. It only happens, however, every three or five years, on the 16th day of the 10th lunar month (around November). Some groups only celebrate it once every twelve years.

The actual date depends on a lot of factors including the time of the harvest and the health of villagers and livestock. During the festival day, Yao people honor their ancestors. They give thanks to them for hearing their wishes and making the wishes come true.

The folk master leads the ceremony. He sings and dances to the god called Panwang. Villagers perform the long-drum dance. This calls for Panwang to protect them.

The ceremony involves playing a big drum that represents the drum that Zuniang gave her daughter. People pray solemnly for health, a good harvest, and fertility for people and livestock alike. They dance and sing traditional Miluotuo festival songs. 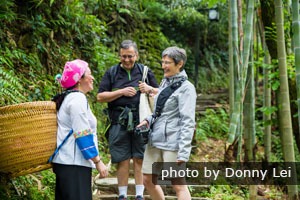 Our customers chatting with a local on the Longji terraces where Yao work. Our guides help with translations... and photos.

An hour north of Guilin, the Longji Rice Terraces are excellent for hiking and photography, and the Jinkeng Red Yao Terraced Fields are considered the most beautiful area. While there, you'll also see the Yao people.

We can take you to visit the Yao and arrange accommodation and transportation. Having an expert local guide and interpreter is important for helping you discover the ethnic areas.

Our tours are typically custom-made. Tell us your interests and requirements, and we will tailor-make a tour. Inquiries are free and receive a response within 24 hours.