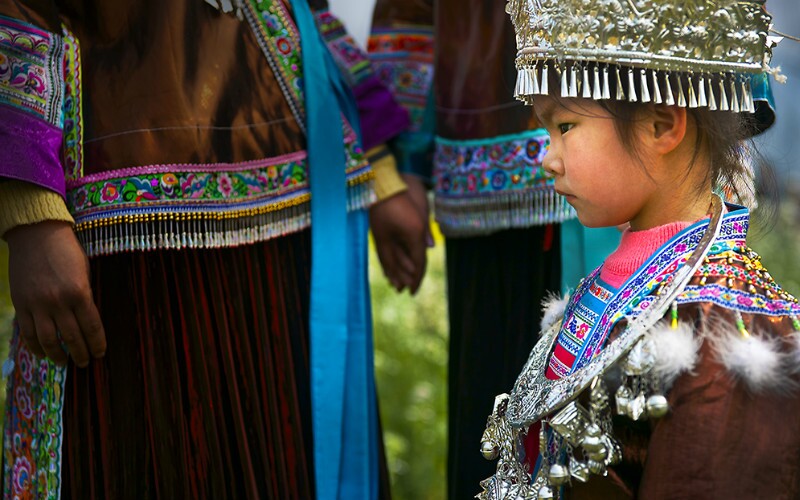 The Miao ethnic minority group population has grown extensively in South China (including Guizhou, Yunnan, Guangxi, Sichuan, Hunan, Hubei, and Hainan provinces) and surrounding SE Asian countries like Thailand and Vietnam. The majority of the Miao people living in China are located in Guizhou province. There are over four million Miao people living in Guizhou.

Miao people are also scattered all over the world. The Miao diaspora has also reached countries like? France, Canada, and Australia. Many Miao people can also be found in the United States of America.

Tai County is home to the largest concentration of Miao people in the world. Their number composes 97 percent of the total population of the county. Other Miao people are spread all over the other counties in the province.

The majority of Miao people live in areas in the mountains that are away from cities. They also prefer to live with their own people rather than those of other ethnicities.

The Miao people are great observers of etiquette. They are also very hospitable and pay respect to their guests. When people visit their homes, families will often kill a chicken to provide poultry for their guests to eat. They also try their best to entertain guests.

Those who have come from far-off places are given a special drink called horn spirit. This is an alcoholic drink served to pay respect to guests.

The poultry ceremony is also a common custom in Miao households. A chicken head is given to the senior member attending the celebration. The leg is given to the youngest person attending. Another common custom is the sharing of a poultry heart. Either a duck or chicken is killed, and its heart is presented to the guest. The senior member of the household presents the heart using a chopstick. The person carefully picks up the heart and presents it to their guest. In return, the guest must share the heart with the person who presented it to them.

People who cannot tolerate alcoholic drinks and fatty meat can excuse themselves from this undertaking. The host will not look down on their request. This is much better than eating too much. Over-eating is regarded as a great insult to a Miao host.

The marriage customs of every ethnic group are unique. Those who are interested in learning more about Miao marriage ceremonies can visit the Guizhou Museum of Marriage Customs of Ethnic Minorities.

Another custom observed by the Miao people is the use of glutinous rice cake. This is prepared, cooked and eaten whenever a man and woman fall in love. They are also used during Valentine’s Day as an expression of admiration,and Miao boys and girls exchange rice cakes at any time to show their affection. After they exchange rice cakes, a mandarin duck is drawn as a token of their love.

Weddings involve eating glutinous rice cake with dragon and phoenix drawings. Couples are also required to drink horn cup (jiao bei) spirits using special cups for the occasion. This is done by crossing their wrists (linking drinking arms) and drinking from their own cups.

Miao people hold a number of festivals throughout the year. The Lusheng Festival is celebrated from the 16th to the 20th day of the first lunar month (February or early March) in the Kaili area of Guizhou province. This is considered to be the most influential festival that the Miao people celebrate because of its immense popularity in Yunnan, Guizhou and Sichuan provinces. This is also the grandest festival celebrated by the Miao people.

Traditional music can also be enjoyed all throughout a stay with the Miao. The Lusheng is a traditional instrument made of bamboo. Many Miao people are excellent Lusheng players, and they are often happy to serenade tourists. Tourists will get to enjoy great music and lots of dancing during festive gatherings.

The Sisters’ Meal Festival is another favorite among the Miao in Taijiang and Jianhe counties. This is similar to Valentine’s Day. It is also the oldest Asian Valentine’s Day celebration. It is celebrated from the 16th to the 18th of the third month of the lunar calendar (usually in April).

The Miao people celebrate their own New Year's Day. It falls during the tenth month of the lunar calendar (late October or November). This is the most important festival for the Miao ethnic group. It symbolizes the start of something new and fruitful. However, the holiday does not have an exact date. The date of New Year's Day is only revealed two months prior to the celebration.

The New Year Festival is very popular among the Miao people. As a matter of fact, this is the biggest festival in Guizhou and Laishan provinces. Tourists who are visiting the province can enjoy various shows that embody Miao customs. They can also see different attractions come to life during the festival. Miao women and girls dress up in traditional costumes and there are large parades. Tourists can take pictures with people in costume and get to know the different stories behind every symbol.

Other festive attractions also include horse racing and bullfights, and the best spirits offered by the Miao population.