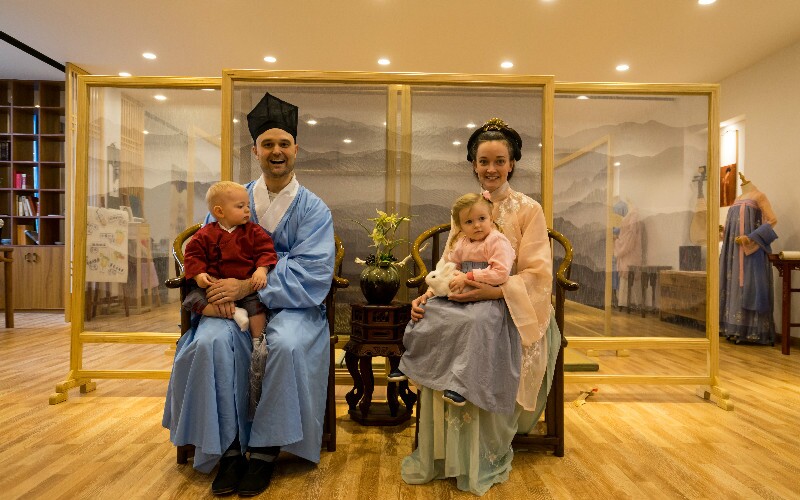 Find out what Chinese people wore long ago. Discover the essence of traditional Chinese clothing from emperors’ clothes to qipaos and ornate Chinese hats.

The Chinese hold the dragon in high esteem and dragon symbolism is very prevalent in Chinese culture to this day. The dragon holds an important place in Chinese history and mythology as being the supreme creature. Combining as it does the greatest aspects of nature with supernatural magical power.

The emperor wore ‘dragon robes’ (龙袍 lóngpáo) in court and for daily dress as a symbol of his supreme status and absolute sovereignty. Dragon embroidery and dragon related patterns were exclusive to the emperor and royal family in China.

The dragon was often thought of as being a composite of the best parts of other animals: an eagles’ claws, a lion or tigers teeth and head, a snakes’ body and so on. The dragons’ signified role is symbolic of magic, of power and supremacy and the emperors adopted this symbolism.

A set of emperor and empress robes: the empress's have phoenixes on.

The dragon and phoenix are considered a natural pairing of animals in Chinese culture.

The phoenix was the exclusive symbolic animal of empresses and of the emperor’s concubines. The higher the female’s rank the more phoenixes could be embroidered or decorated on the dresses or crowns.

Dragon and phoenix motifs were typical of traditional Chinese embroidery for the royal class.

Exquisitely embroidered square fabric panels sewn onto the chest and back of a costume indicated ones rank in court. The limited use and small quantities produced of these highly detailed embroideries have made any surviving examples highly prized in today's historic, archaeological and embroidery circles.

Another interesting fact was that patterns for civilian and military officers were differentiated by elegant genus of creatures like cranes and peacocks for court and more ferocious animals like lions and rhinoceros for the military: the higher rank the greater animal.

Hats and ornate head gear were an essential part of custom dress code in feudal China. Men wore hats and women wore their hair ornamentally with showy hairpieces, both of these indicating their social status and ranks.

Men wore a hat when they reached 20 years, signifying their ‘adulthood’ — ‘Poor people’ simply weren’t allowed to wear a hat in any significant way.

The ancient Chinese hat was quite different from today's. It covered only the part of the scalp with its narrow ridge instead of the whole head like a modern cap. The cap also signified the social hierarchical rule and social status.

There were restrictive rules about clothing accessories in ancient China. An individual’s social status could be identified by the ornaments and jewelry they wore.

Ancient Chinese wore more silver than gold. Amongst all the other popular decorative materials like blue Kingfisher feathers, blue gems, and glass, jade was the most prized ornament. It became dominant in China for its highly individual qualities, hardness, and durability, and because its beauty increased with time.

6. Hànfú became the traditional wear for the majority.

It featured a crossing collar, waistband, and a right-hand lapel. It was designed for comfort and ease of use and included shirts, jackets, robes for men, unisex skirts, and trousers.

7. The bianfu was an extremely popular costume in imperial China.

A bianfu (弁服 biànfú /byen-foo/ ‘hat-clothing’), consisted of a two-piece outfit; a tunic extending to the knee on top of a skirt reaching the ankles and a cylinder-shaped hat called a bian. The skirt was mainly used in formal occasions.

The bianfu inspired the creation of the shenyi (深衣 shēnyī /shnn-ee/ ‘deep-robe’) — a similar design but just with the two pieces sewn together into one suit, which became even more poplar and was commonly used among officials and scholars.

8. The shēnyī was traditional attire for more than 1,800 years.

The shenyi is now most commonly seen in traditional Chinese wedding clothes.

The shēnyī was one of the most ancient forms of Chinese attire, originating before the Qin Dynasty (221-206 BC). Quite a symbolic garment, the upper and lower parts were made separately and then sewn together with the upper made by 4 panels representing 4 seasons and the lower made of 12 panels of fabric representing 12 months.

It was used for formal dressing in ceremonies and official occasions by both officials and commoners until the Tang Dynasty (618 - 907) when it was adjusted and renamed to lánshān (a looser version of the shēnyī, with a cross collar attached to it). It became more regulated for wear among officials and scholars during the Ming Dynasty (1368-1644).

9. Traditional Chinese chángpáo suits were introduced by the Manchu.

The chángpáo ('long robe) was a loose-fitting single suit covering shoulder to ankle designed for winter. It was originally worn by the Manchu who lived Northern China where winter was fierce and then introduced to central China during the Manchurian Qing Dynasty.

10. Qipaos became the representative Chinese dress for women in the late dynastic era.

Qipaos were developed to be more tight-fitting in the Republic of China era (1912–1949).

The qipao (/chee-pao/ 'Qi gown', known as a cheongsam in Vietnam) evolved from the Manchu female's changpao ('long gown') of the Manchu Qing Dynasty (1644–1912). The Manchu ethnic people were also called the Qi people (the 'banner' people) by the Han people in the Qing Dynasty, hence the name of their long gown.

To discover more about the clothing and culture of the earlier dynasties (Qin, Han, Tang) the best place to go is Xi'an: see Qin clothing at the Terracotta Army Museum and Tang costume at a Tang banquet and show. For the latter dynasties (Yuan, Ming, Qing) visit Beijing: see what the emperors wore at the Forbidden City.

We are one of the largest private touring companies in China, with a great reputation for tailor-made service. While traveling with us, YOU set the itinerary and can explore your interests.

You can modify these sample itineraries as you wish. Contact us and we'll respond within 24 hours.