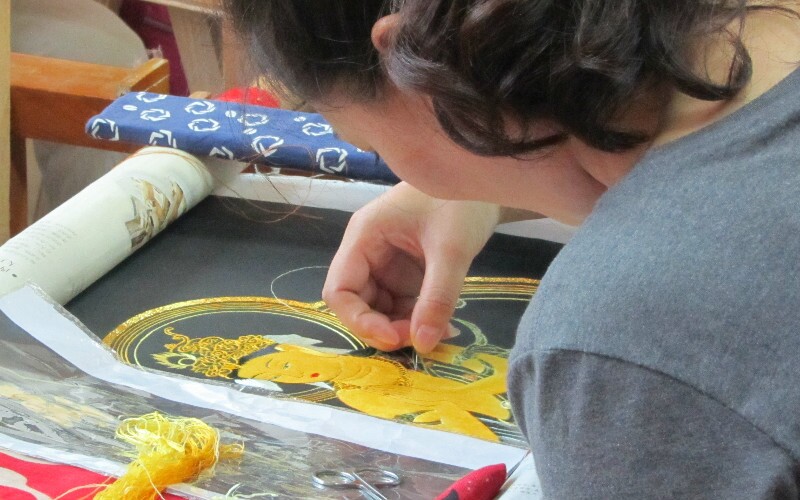 The art of embroidery was widespread throughout China in the Han Dynasty (BC 206 – AD 220). Four distinctive styles, or schools, of embroidery emerged at that time, though each would reach their pinnacle after the blossoming of the Silk Road trade created a demand for Chinese goods.

The four schools of Chinese embroidery are now designated by the government as a Chinese Intangible Cultural Heritage. They are: Shu embroidery, Xiang embroidery, Su embroidery, and Yue embroidery. Miao Embroidery is a separate style of embroidery from a minority group.

The Shu School of Chinese Embroidery

The Xiang School of Chinese Embroidery

Xiang embroidery has historically been associated with Hunan Province. "Xiang" is an abbreviation for Hunan, which comes from the Xiang River which runs through the province.

The most salient features of Xiang embroidery are:

This lifelike picture of cranes is an example of Xiang embroidery.

The Su School of Chinese Embroidery

Su embroidery derives its name from the abbreviation for Jiangsu Province, which is also the "Su" in the provincial capital Suzhou.

Su embroidery is categorized into Pre and Post Ming Dynasty (1368–1644), when Su embroidery was influenced by both Japanese and Western art, absorbing these and changing forever. The absorption is likely due to the province's proximity to Japan and the interaction with the West at the time.

The most salient features of Shu embroidery are:

Su embroidery is also popular today, and now is used for general-use products such as handbags. Su embroidery has won recognition at international expositions. The best place to buy Su embroidery is at the Su Embroidery Museum in Suzhou. Find out more on Suzhou Shopping.

The Yue School of Chinese Embroidery

Dragon and phoenix motifs are typical of Yue embroidery.

Yue embroidery (Cantonese Embroidery) is associated with present-day Guangdong Province. ("Yue" is the abbreviation for Guangdong".)

Though there is little evidence, Yue is believed to the be the oldest embroidery school. According to historical sources, early Yue embroidery used twisted peacock feathers and used horse tail hair to separate colour borders. These are still used today, though mostly for accentuation.

Although Yue Embroidery combines many embroidery schools, there are two characteristics that distinguish the style, these are:

Beautiful embroidery of the Miao minority

Miao embroidery is a unique art of the Miao minority people.

Miao embroideries can be bought in Southeast Guizhou where China's largest Miao community is located. Xijiang Miao Village in Kaili is particularly well-known for its embroidery. Embroidery is available on sale in the village.