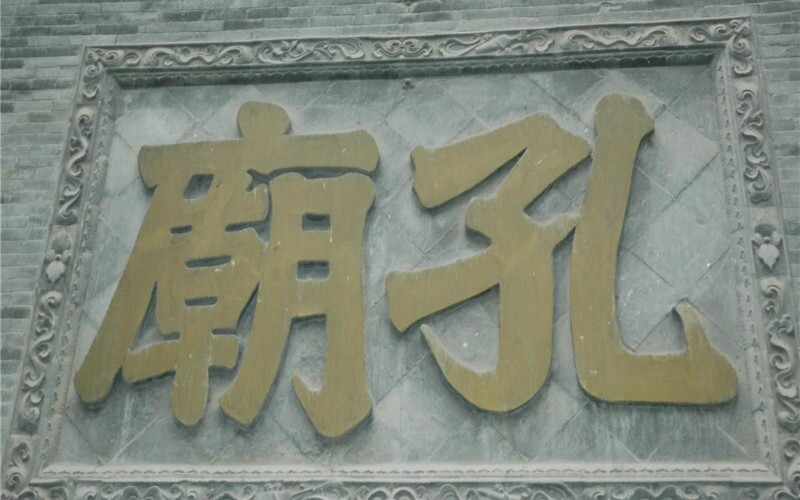 Anshun Confucian Temple is the earliest and largest open Confucian temple site in Guizhou Province in southwestern China. A temple there was originally built in 1368, and it has features similar to the Forbidden City that was built about the same time by the Ming Dynasty. It covers an area of about 8,000 square meters. It is also called Fuxue Palace. It is located at the northeast of Anshun City. Among the features, there is a screen wall and festooned gates, four courtyards, four entrances, decorated and carved antique-style stone bridges, and several buildings including the Dacheng Hall and the Guixiang Pavilion.

To decorate the front of the temple, there is a screen wall facing the gate. There are also two festooned gates called Li Gate and Yilu Gate. There is also a stone tablet saying that "civil and military officials should get down from their sedan or horse". It is called the Dismount Stele.

There were four entrances to the Anshun Confucian Temple complex. Three are preserved. Going through the first entrance, you will see a half-moon shaped pond called Panchi Pond and an arched stone bridge. Crossing the bridge, you will see a stone archway called Lingxing Gate. It is a magnificent stone carved memorial archway.

Going through the second entrance, you will see the Guixiang Pavilion. The pavilion was once used to display the list of officials who would attend the Confucian sacrifice. Past the steps is the Dacheng Hall that has a stone pillar in front.

Going through the third entrance, you will see a quadrangle composed of the Dacheng Hall, two verandas and the gates of Dacheng Hall. There are two peripheral columns under the eaves of the front aisle.

Special Products: Articles for sale include prints, carpets made by the Bouyei people who are an ethnic group in Guizhou, theatrical masks, and carved stones.