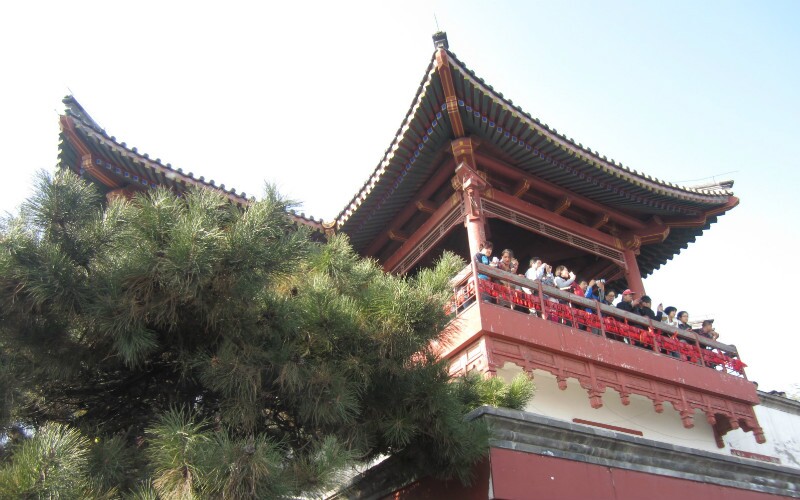 Fragrant Hill is a famous forest park and an imperial garden with a long history.

The maple leaves in the Fragrant Hill

Fragrant Hill is in the suburb of northeastern Beijing. It is about 20 kilometers from the central city. It was used during the the Jin Dynasty era, and it has more 800 years of history. Today, Fragrant Hill is described as a famous scenic spot that has a long history and a beautiful landscape. It occupies an area of more than 16,000 square meters. The highest mountain is called Censer Peak. It has an altitude of 557 meters. There are various hills, gullies and clean springs with good-tasting water. The special natural environment makes Fragrant Hill heavy with vegetation. There are thought to be more than 5,000 ancient trees. Highlights of the mountain include Censer Peak, the Hall of Diligent Government, the Temple of the Azure Clouds, the Memorial Hall of Sun Zhongshan, the Lake of Glasses, Fragrant Hill Temple, the Double Clean Villa, Yu Hua Villa, Zhao Temple, and the Fragrant Hill Cableway that gives you a wide birds-eye view of the park area. See China Highlights' tours to visit this park

It is situated at the highest place of Fragrance Hill. It is so full of cliffs that people call it “the ghost scares.” On the top of the peak are three pavilions with distinctive features.

Located at the eastern gate, the Hall of Diligent Government is considered to be about the best of the highlights of the area. It was once used as a hall for an emperor of the Qing Dynasty named Qian Long. He used it to deal with his government affairs and to receive officials. The name of the hall means being diligent in governmental affairs.

Temple of the Azure Clouds

Temple of the Azure Clouds

It is a delicate ancient temple in the area. The site has more 600 years of history.

The Memorial Hall of Sun Zhongshan

On March 12th, 1925, Sun Yat-Sen who is called the “Father of Modern China” died in Beijing. In Mandarin, he is called Sun Zhongshan. He was the leader of the revolution. His coffin was set here before it was delivered to Nanjing. A grand public memorial ceremony was held. There was great mourning. Later, the site was called The Memorial Hall of Sun Zhongshan.

This site was built during the Republican period before the Communist Revolution. Two pools form the lake that look like a pair of spectacles. At the northern part of the lake, there is a stone cave on the side of the mountain. Clean water from the Zhuo Xi area forms the curtain of water before the cave. There is a pavilion called the Wonderful Day Pavilion. On the northeast side of the lake, there are colored paintings.

This site once was a temporary dwelling place of an emperor of the Jin Dynasty. In front of the middle building, there are a stone screen, a stone monument, and stone stairs. The stone screen is of great value in itself. There is the Diamond Sutra, the Heart Sutra, and the Kwan-yin sutra. There are pictures of Buddha Dipamkara (the Buddha who is in charge of lights), the goddess Kwan-yin, and Samantabhadra who was one of the four Bodhisattvas in China on the back of the stone screen. The holy plant of the Buddhism is a kind of plant that has leaves like that of a palm tree and flowers that are like towers that blossom in May and June.

On the southeastern hillside is a special quiet yard in which are two clean springs that flow all the year long. There are also pavilions with eight corners and giant maidenhair trees beside the pools of the yard.

This is the perfect place for appreciating maple leaves in the fall. It is situated in the center of the park.

This is a large attractive building with the style of a Tibetan temple. It is 30 meters high with yellow azure stone bottles on the top and eight cornices. Among the cornices are 56 brass bells that make sounds. There are white stone handrails and chairs with eight corners. Below the handrail, there are eight spots under which there are eight Tagees with a Buddha statue carved on each of them.

A way to see the area easily is to go up the mountain by cable car. There is a cable line that goes up from the northern gate to the top of the censer peak. It is divided into three stations.