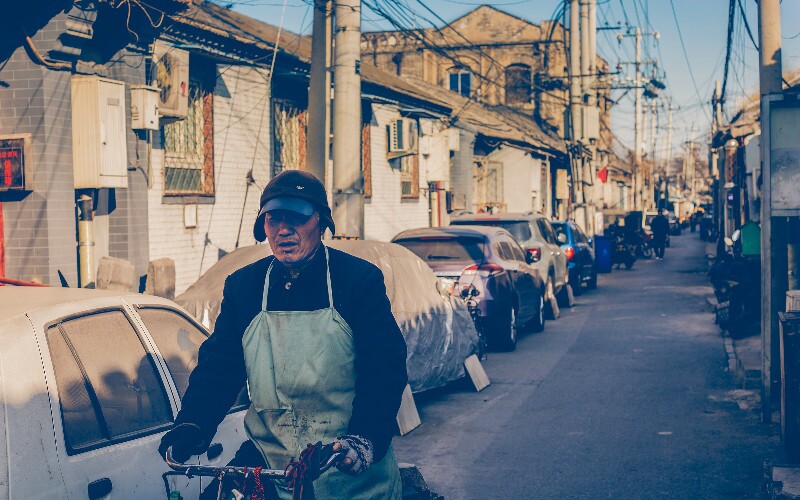 Beijing's hutongs can be very narrow, but they are full of history.

A hutong is a street or alley bounded on both sides by old buildings in courtyard compounds. Of all the hundreds of hutongs in Beijing, here is our selection of the top hutongs for tourism - they each have something special about them.

In the hutongs, you'll see the way of life of "common" Beijingers (some hutong residents were actually famous and rich). It contrasts greatly with the imperial culture  of places like the Forbidden City. You should not miss the hutongs as they will give you a different persective on Beiing and its history.

1. Dongxijiaomin Xiang Is the Longest Hutong

Dongxijiaomin Hutong is 6.5 kilometers (4 miles) long and combines the former foreign legation area of Dongjiaomin Xiang (东交民巷) and the banking street Xijiaomin Hutong (2. below). The long hutong is mainly famous for its old foreign-built buildings and the historical events that happened there. It is popular among tourists and is listed 371 of the 1,566 Things to Do in Beijing on TripAdvisor [2018]. There is a huge famous Quanjude Roast Duck restaurant on it.

In the Yuan Dynasty (1271–1368), it was called Dongjiangmi Xiang ('East River Rice Lane'), as it was next to the river port where rice and food from the south were unloaded for distribution in Beijing. After the Boxer Rebellion in 1900, the hutong was renamed the Legation Quarter (Dongjiaomin Xiang, as shown on official maps from then on). It became an area managed by foreign legations, and all Chinese residents in the area had to move out.

Life in a hutong

About the time of the end of the Qing Dynasty (1644–1912) and the beginning of the Republic of China (about 1900), there were many banks constructed along it. The Daqing Bank was founded in 1905, and it is the most famous Chinese-funded bank because it was the first central bank in Chinese history. It was once called Hubu Bank, and in 1912, Sun Yat-sen, the president of the Republic of China, announced its reorganization to become the Bank of China.

Guozijian Street was formerly known as Chengxian Street (成贤街). It is listed as an important historical site, and for tourists, there is extraordinary ancient architecture there since the Guozijian (Imperial College) and the Confucius Temple (1302) are located in this street. Yonghegong Lama Temple is next to the east entrance of the street.

The Yonghegong Lama Temple was originally built in 1694 and was once the residence of the Yongzheng Emperor. There are four pailous (traditional Chinese archways) on the street.

Tobacco Pouch Street is one of the oldest byways in Beijing, and it is one of the famous and beautiful cultural streets of Beijing. While many landmarks in Beijing are of China's imperial heritage, this street preserves the character of a commoner street in Beijing and highlights some of the traditional customs.

It is very popular at 40 of 1,566 Things to Do in Beijing on TripAdviser. While visiting, you can shop for all types of tourist products, eat at the restaurants and numerous street stalls, and stay in the hotels.

During the Qing Dynasty (1644–1911), it was a business street mainly selling smoking sets, antique jade, and picture mounts. Guangfu Temple, built in 1459, is located there. The basic architectural style of Tobacco Pouch Street has not changed. it is one of the hutongs selected for preservation.

Nanlougu Hutong is for scenic pedicab rides and dining, and it is one of the top tourist shopping streets with both Chinese style and international restaurants. It is a few kilometers from the Forbidden City. It is one of the oldest streets in Beijing, and the traditional Yuan Dynasty style layout is among the best preserved in the country.

The Drum Tower (鼓楼 /goo-loh/) is a sight you can see while visiting Mao'er Hutong.

Numbers 3, 5, and 7 of Ju'er Hutong are the former residence of Rong Lu (1836-1903), a minister of the late Qing Dynasty who was appreciated by Empress Dowager Cixi. Numbers 3 and 5 were listed as officially protected monuments and sites in 1988. Number 7 was the Afghan embassy.

At the end of the 1980s, some of the siheyuans of Ju'er Hutong were remodeled, and this program obtained World Habitat Awards from the United Nations.

In the early Qing Dynasty, antique shops were set up, and in the Qianlong period (1736-1795) , it became the distribution center for antiques, calligraphy works, Chinese paintings, and the "scholar's four jewels" (writing brush, ink stick, ink slab and paper). Still there are many shops selling antiques, calligraphy works, and Chinese paintings. Founded in 1672, the famous Rongbaozhai still keeps operating.

Liulichang Street is a well known cultural hutong in China.

The snack street in Wangfujing Street is a place to stop on Jinyu Hutong.

The Temple of Heaven is a place you can see near the Eight Hutongs.

The Eight Hutongs are a cluster of eight preserved hutongs that was a nightspot in the old days of Beijing, and they have been preserved. They are still places where people can see residential hutongs and the old-fashioned Beijing hutong lifestyle of common people in the central city.

They were founded during the Qianlong Emperor period (1735–96). Lady Sai Jinhua (1872–1936), a once famous prostitute and influential lady, once lived there.

Yichidajie (yīchǐdàjiē /ee-chrr-dah-jyeah/) is the shortest in the 8 hutongs, and it is notable as the shortest hutong in Beijing. The English translation is 'One Foot Street.' It is only about 10 meters long and is located in the southeast on the eastern side of Glazed Glass Street (琉璃厂东街东口东南) (see above). There are six shops in the street: the three shops in the north are engraving shops, and the three in the south are a winery, a smithy and a barbershop.

Qianshi Hutong is to the west side of Beijing Zhubaoshi Street (珠宝市街), near the famous commercial area of Dashanlan (大栅栏). It has long been the narrowest hutong in Beijing. It is 55 meters long, 0.7 meters in width and 0.4 meters in its narrowest part. Two people facing each other have to go through the hutong sideways. At the end of the hutong is a courtyard, with an awning above it and bedrooms beside it. The courtyard is a remnant of a monetary market in the Qing Dynasty, where ancient official currencies were exchanged, and it was an early form of a financial market.

Sanmiaojie Hutong is behind Guohua Shopping Mall, Changchun Street, Xicheng District, Beijing. It is a historical hutong which can be dated back to 900 years ago, to the Liao Dynasty (907 AD-1125 AD).

East meets West in hip-and-happening Wudaoying hutong, a great stop for travelers and Beijing-dwellers alike. This renovated hutong holds all kinds of Western comforts, from coffee to fast food, to slightly more fancy dining, and even Mexican food.

Touring the Hutongs with China Highlights

The hutongs reflect the culture of the common people, while the Forbidden City, Summer Palace, and the Temple of Heaven are symbols of imperial culture. To get to know Beijing, you should not miss the hutongs during a Beijing tour!

All our tours can include the hutongs. Contact us for a customized itinerary.