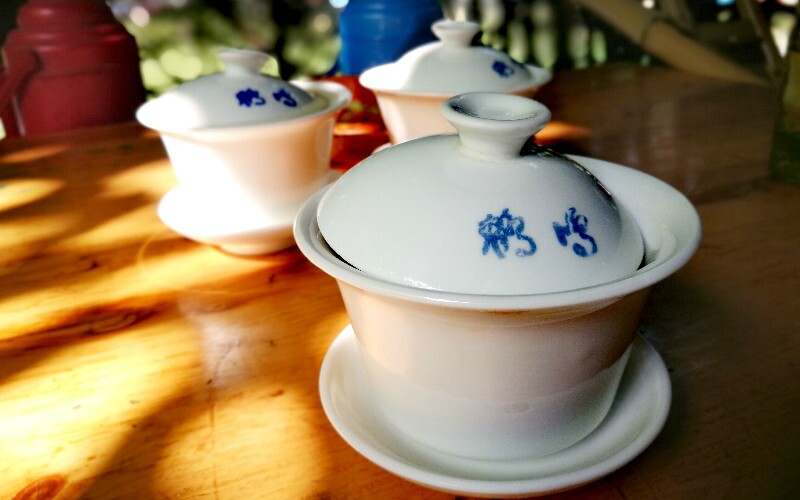 When mentioning Lao She Teahouse, you will discover that it's a household name, not just in the capital but also in other cities of China, and even abroad. Lao She Teahouse has become the "Visiting Card" of Beijing - the ancient capital of the Six Dynasties and an international metropolis.

Why It's Called "Lao She" Teahouse

However, this place has nothing to do with Lao She - the notable Chinese writer, novelist, and dramatist - himself. If you want to see items that actually relate to him, you can visit his house, which is now a historical site, in a hutong near the Forbidden City.

Lao She Teahouse is located in Qianmen Street, covering a business area of 2,600 square meters (28,000 sq. ft.). Decorated mainly in a traditional Chinese style, it is simple and elegant with a Beijing-styled environment.

Neatly arranged square tables, backrest chairs, palace lanterns hung from the ceiling, wooden tablets marked with a tea table on the counter, and paintings and calligraphy couplets hung on the wall make you feel like you are entering an old Beijing folk museum.

Why It's So Famous

Nowadays, there are five or six hundred teahouses in Beijing, but why does Lao She Teahouse enjoy the reputation of being the "Visiting Card".

One reason is that it was the first modern teahouse after the reform and opening up of China, with the price of a big bowl of tea only costing two cents.

Secondly, the well-known teahouse in Beijing was named after Lao She, who was one of the representatives of the Beijing-flavored culture.

Thirdly, Lao She Teahouse embodies the flavor of Beijing, where not only can the tea be tasted but the culture can also be appreciated by visitors.

A Wide Variety of Performances

People there can enjoy splendid performances every day combined with outstanding folk arts, such as operas, acrobatics, magic, and face changing while enjoying famous tea, palace snacks, as well as traditional Beijing-style snacks.

Numerous celebrities both at home and abroad have visited Lao She Teahouse since it was founded, and it enjoys a high reputation in the world. It has been a window for exhibiting the national culture and a bridge that connects China with the rest of the world. The types of performances given at Lao She Teahouse are detailed below.

Handeng drums are one of the folk arts of China. Handeng (含灯 hándēng /han-dnng/ 'contain lamp') means to have a lamp holder in the mouth of the drummer. When drummers are drumming, they hold a flat stick (like a 30cm / 12 inch ruler) in their teeth, which has a horizontal length of nearly one foot. On top of the stick stand a number of lit candles and the bottom is decorated with colored tassels, each a drooping braid made with colorful feathers or silk.

On the one hand, drumming in this way increases the difficulty of performing; on the other hand, it adds to the visual effect of the show.

Face changing is one of the special skills of a Sichuan opera performance, which is a dramatic way to reveal thoughts and emotions in the characters' hearts. It represents invisible, abstract feelings with visible, specific mask colors and designs.

Chinese kungfu includes kicks, blocks, and punches. It is a crystallization of the wisdom of Chinese martial arts.

Peking opera or Beijing opera is the quintessence of Chinese performing arts, and has a history of 200 years. It has a rich list of plays, artists, troupes, audiences, and wide influences, making it the foremost opera in China. Beijing opera is a comprehensive acting art. It blends singing, reading, acting, fighting, and dancing together to narrate stories, depict characters, and express thoughts and feelings of "happiness, anger, sorrow, joy, surprise, fear, and sadness".

Performers imitate sounds by using their mouths, teeth, lips, tongues, and throats. For example, the aircraft, artillery, and explosions of military battle scenes can be imitated vividly, which makes the audience feel like they are part of the scene. Audiences enjoy the skill of the performers immensely.

A two-man comic show is a comic pairing in which humor is derived from the relationship between the two partners and use of props.

Often one of the members, using his/her body to perform, is known as the performer, while the other one, who is good at singing and has a wonderful voice, is called the rapper. The performer doesn't make any noise but silently moves to the pronunciation of the rapper.

Shadow plays are an ancient and unique dramatic folk art, using a piece of white gauze as the screen.

Shadow puppetry originated during the Western Han Dynasty 2,000 years ago. A shadow puppet performance involves projecting shadows of the paper dolls or puppets onto the screen, accompanied by music and singing, to show a dramatic story. In the development of Chinese performing arts, shadow plays were probably the earliest form.

Performances are from 7:40 to 9:20 every night in the West Hall on the third floor of Lao She Teahouse. There are comprehensive performances, including the Beijing Opera, folk arts, acrobatics, and magic. Booking two days in advance is required.

The price for a performance is 60 to 380 yuan and tea is included. The major difference in price is due to the distance from the stage and the refreshments included.

Folk music is performed from 2:30pm to 5pm every Monday to Friday in the teahouse's small eastern hall, which costs 10 yuan with a tea service.

Drinking Tea in the Teahouse

You can drink tea in Lao She Teahouse on the third floor. Scented tea and green tea are the main teas, which are served mainly in cups and covered bowls. There are about 20 kinds of tea and homemade biscuits.