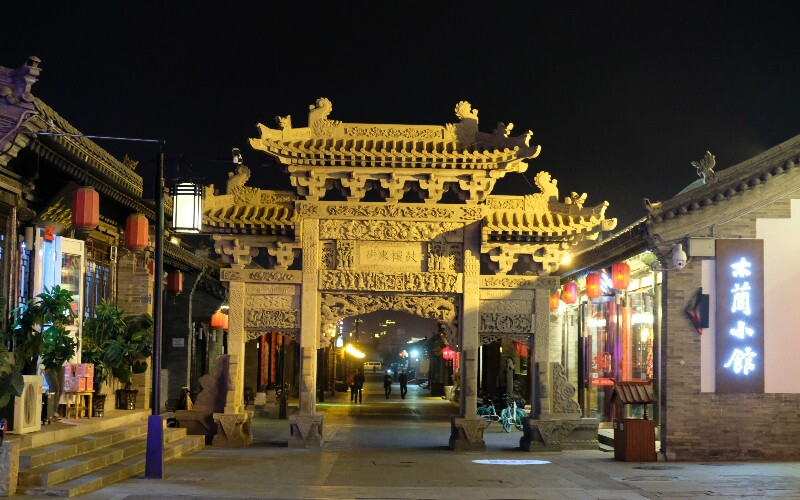 Jinhuagong Coal Mine was built in 1956, 12km(7 mi) west of Datong City. It is close to the Yungang Grottoes, across a river.

The Mine and Processing Plant

Visitors to the mine can tour the tunnels and see the mine's coal factory. You can watch as the coal is extracted and processed. Some of the tunnels go two miles into the mountain. A small train takes workers (and visitors) into the tunnels.

Tourists who enter the mine are issued protective clothing such as a hard hat, gloves, overalls, and boots. You may also be given a flashlight. You are taken down an elevator that might go down 300 meters (900 feet).

You might see a section of collapsed tunnel. The tunnel collapsed when there was an earthquake.

In the mine, there is a display of statues that show how miners labored in the past with primitive equipment.

You can see the old equipment that they used to dig out the coal manually. You might also watch as the big modern equipment digs out the coal mechanically. And you may see exhausted miners who are covered with coal dust.

The mine is an important one because the quality of the coal is high and the demand for energy is increasing rapidly in China. The mine has recoverable reserves of about 150 million tons.

Currently, about 4.5 million tons are produced annually. This compares with the approximately 4.5 billion tons of coal that is produced in China annually. Though this is just 0.1% of total production, the mine is an important one. Some of it is exported to other countries.

Datong Jihuagong Coal Mine produces high quality coal that produces a lot of heat when it burns. It is low in sulphur content, soit burns cleanly and is ideal for home use.

Though much of the developed world is in industrial decline, China’s economy is still growing. The growth is largely coming from energy-intensive industries, such as steel production, cement production, and automobile production. So China’s demand for energy is increasing.

Facts About Datong’s Coal Mine

Datong is an industrial city about 350 km (210 miles) west of Beijing in Shanxi Province. Jinhuagong Mine is on the city's western outskirts, on the road to the Yungang Grottoes.

Note that tourists are not allowed to bring cameras or phones in the mine.

Here is the address in Chinese to show a driver: 大同晋华宫煤矿，大同市煤田的东北部边缘.

Tour Datong’s Mine and More Your Way with Us

If you want to discover more about Datong, it is advisable to have an experienced private tour guide. We can help you with that.

Tell us your own interests and requirements for a tailor-made China tour designed by our experts.

datong Datong Travel Guide - How to Plan a Trip to Datong