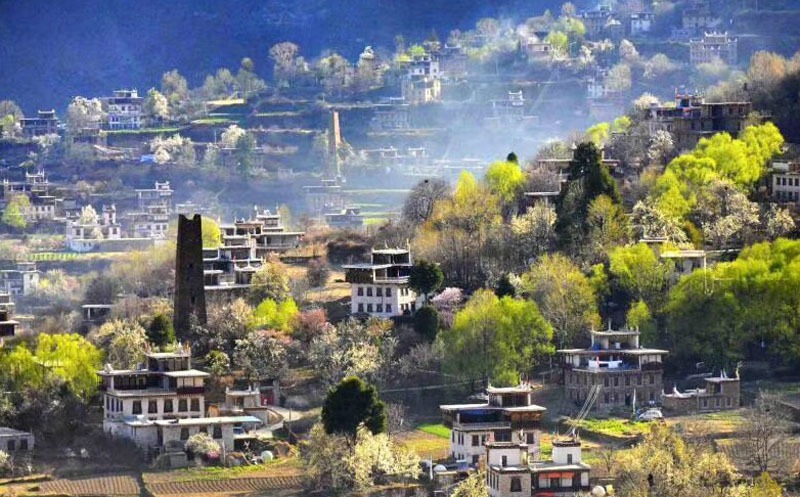 In addition to the beautiful scenery on the prairie, there are famous temples, mysterious religious practices and many folk customs. A series of local festivals such as Zhuang Shan Hui (a festival for visiting the mountain), Pao Ma Hui (a festival for horse racing), Se Da Jin Ma Jie and Central Le Festival can be described as the concentrated expression of religious culture.

The vast Datongma Prairie stretches out under the high bright blue sky and the delightful sunshine. Viewed from afar, it is like a huge green blanket under the vast blue sky, with flocks of sheep dotting it like blossoming flowers. The beauty of the infinite is mesmerizing and indulges travelers in great pleasure without end. In addition to natural landscapes, there are also cultural relics as follows:

Datongma Prairie is located in the heart of the Sichuan-Tibet Plateau and because of having few contacts with the outside world for thousands of years the development of religious activities there has been isolated yet very complete. Therefore, there still remain a number of ancient and mysterious religious cultures. The well-preserved Za La Temple is one of the eleven famous temples of Red Hats (Tibetan Lamaism) in Ganzi County. The temple is located on high land with an elevation of 3,980 meters. It is near the seat of Chalong Township government, and 100 kilometers away from Ganzi County. The Ganda road links the downtown with the temple.

Mani rocks can be found everywhere on Datongma Prairie. They are actually cairns of stones with scriptural texts painted or carved on them. They are called “Mani” in the Tibetan Language, short for the Buddhist mantra OM MANI PADME HUM. These rocks with scriptural texts have been piled up into a rock wall generation by generation. Now whenever local residents come across the wall, they will more often than not add another stone on it and take several round walks while practicing the mantra.
A large number of Buddhist sutra streamers are hanging on Datongma Prairie, particularly on the south slope of Shen Mountain behind Za La Temple. The temple is adorned with tens of thousands of streamers, which make the temple solemn and respectful. Other places are also famous for the streamers. For example, the rock wall near Jiaren Pond is surrounded by streamers, which are joined through by several yak ropes and nylon ropes. Dozens of ringed layers of streamers hang upon the surrounding wall, forming a unity of pyramids.

Tianzang Tai is a special kind of terrace where Tibetan people hold funerals. Generally Tianzang Tai are located on the southern slope of a mountain without special symbols. After the deceased is placed on it, a flock of vultures will fly here to eat the dead body, and then fly away. However, the Tianzang Tai in Tongdama is different. It is located on a grassy and open slope, 350 meters up from the foot of a mountain and 1 km away from the southern end of Za La Temple. Along with the densest streamers in local area, which rise layer upon layer, they create an extremely solemn atmosphere.

Travelers can drive by themselves or chart a taxi to there.