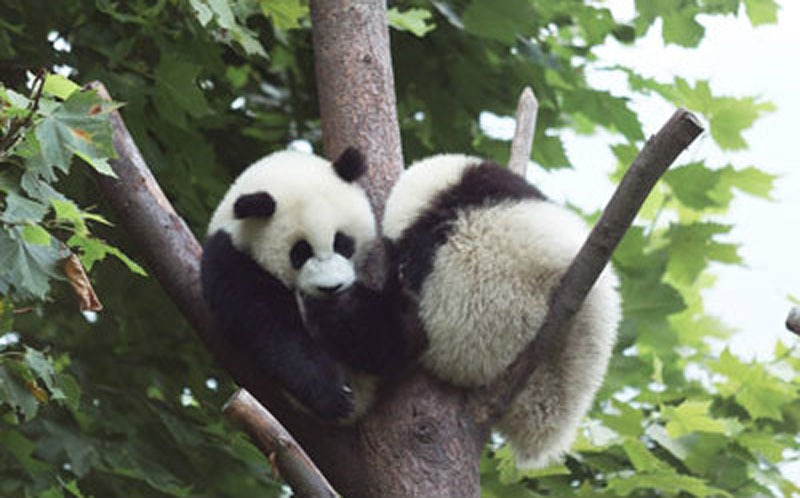 The Sichuan Giant Panda Sanctuaries, part of a new protected area scheme set to encompass the current wild panda population of 2,060, consist of seven nature reserves and nine scenic parks in the Qionglai and Jiajin Mountains.

Because giant pandas are very shy and hard to find, it is not always 100% clear how many are currently living in the sanctuaries below.

Apart from giant pandas, these sanctuaries are also home for other endangered species such as the red panda, the snow leopard, and the clouded leopard. The flora in this area is also extremely unique and has inspired lots of traditional Chinese medicine.

Most of the "Sichuan Giant Panda Sanctuaries" are in Western Sichuan, but some encroach into neighboring provinces.

Encompassing more area than the panda center in the area, Wolong Nature Reserve was allegedly home to 104 wild giant pandas in 2012 according to a study funded by the Chinese State Forestry Administration.

As far as is known, this makes it one of the most heavily populated areas when it comes to wild giant pandas. It is also a beautiful place to visit.

A beautiful bamboo forest, Fengtongzhai Nature Reserve in Baoxing County is one of the first places where pandas were shown to the world, through the visit of a French preacher named David in 1869.

There are currently just four pandas that remain here, but the area is also known for 380 other species as well as 395 kinds of plants. There are also six known red pandas in this reserve.

For a beautiful hike, Mount Siguniang Nature Reserve is one of the other mountainous areas recognized for its important in the conservation of the giant panda. Together with Wolong and Jiajin Mountains, this area is also home to the red panda, the snow leopard, and the clouded leopard.

According to UNESCO, 365 bird species were recorded as endemic to the area, and it is one of the botanically richest sites of any temperate region in the entire world, with 5,000-6,000 species recorded. This site is thus extremely important for traditional Chinese medicine.

The reserve has recently been named as a United Nations International Wildlife Reserve.

Lava River Nature Reserve, established in 1963, is located at the foot of Jinshan Mountain in the Ganzi Prefecture of Sichuan, west of Ya'an'. It is home to rare fauna and flora such as the giant panda, snub-nosed monkeys, dove trees, and takins.

It is unsure how many giant pandas are currently here, but the area is also home to takin, the snub-nosed monkey, the red panda, red deer, and leopards!

Located in Kangding County, Jintang-Kongyu Nature Reserve is certainly off the beaten path when it comes to Sichuan travel.

There are not currently any known wild pandas in this specific reserve, but it is a beautiful place for hiking or getting into nature. And you never know - this is the type of forest they love!

One mountain pass removed from the better-known Wolong Panda Reserve, Caopo Nature Reserve residents say that they often spot signs of pandas such as tracks, feces, and half-eaten bamboo, according to a CNN article, but don't spot the wild creatures themselves.

The reserve is great for hiking, and the Tibetan and Qiang ethnic minority families living in the area produce beautiful embroidery too.

Located near Dujiangyan Giant Panda Base as described above, Mount Qingcheng is also known as the birthplace of Taoism. It is one of the most sacred mountains in the country and boasts some incredible peaks and lush forests for a peaceful escape from Chengdu.

You can read more on Mount Qingcheng. While you're unlikely to spot a giant panda (as there are quite a few visitors around and they are very shy), it's well worth a visit.

Mount Tiantai Scenic Park is at least home to one pair of giant pandas, which was released here in July of 2017 according to an article in the China Daily. There is no current count on how many there are here in total.

The park has plenty of activities for visitors, including viewpoints, valleys, and ponds for swimming, as the area has lots of waterfalls. You'll also be able to see one of about 220 kinds of butterflies!

Well-known as a place for skiing, Xiling Snow Mountain is located in Dayi County, about 95 km (or 59 miles) from Chengdu.

Other attractions include gorgeous scenery, waterfalls, ponds, and other natural beauty.

It is unclear how many wild pandas there are here at the moment, but they have been spotted in the lush forests in the past!

Known as one of the best spots for autumnal red leaves throughout China, Miyaluo Scenic Park is located in Aba Prefecture in Sichuan, about 263 km (164 miles) from Chengdu. There are beautiful grasslands, and the opportunity to experience the unique culture of the Tibetan and Qiang ethnic minorities.

A recognized UNESCO World Heritage Site, Mount Erlang Scenic Park is one of the outlying scenic parks in Shaanxi Province. It is a wonderful place to clear the mind and return to nature, and offers a good escape from many of China's big cities!

There is no current tally of exactly how many wild giant pandas are here.

14 to 16. Other Sichuan Giant Panda Sanctuaries

Together with the top giant panda bases in Sichuan that were previously established and that are open to the public, the newly established sanctuaries comprise the home of more than 30% of the world's highly endangered giant pandas and the most important sites for their captive breeding.

Home to approximately 50 pandas, the Chengdu Giant Panda Breeding Research Base (or Chengdu Panda Base for short, specializes in baby pandas and their care.

There is also a museum, and there are red pandas to visit here too. This combination, as well as the proximity to Chengdu, makes it one of the most popular destinations for foreign travelers to visit.

The research base is also home to the adorable red pandas!

Located about 65 km (or 40 miles) northwest of Chengdu, Dujiangyan Giant Panda Base is popular for its volunteer program. Visitors are able to help care for the giant pandas here by feeding them or by scooping up their poop to clean their living quarters, or you can help to plant bamboo in the area.

This panda base has about 20 pandas, and there's lots to learn about these amazing creatures!

The Bifengxia Giant Panda Base is based in a beautiful, dense forest, surrounded by breathtaking scenery and numerous waterfalls.

The more than 80 giant pandas here, compared to the Chengdu Research Base, are more in their "natural habitat," as they are trained in a simulated wild environment in order to return them to nature if they are fit enough to survive in the wild. This is also where giant pandas returning from overseas are brought.

Wolong Panda Center is home to approximately 30 pandas, and it is considered to be the real hometown of wild pandas. You'll need approximately 2 days to visit (and we also offer a 4-day in-depth panda tour here) as it is a few hours outside of Chengdu.

Discover the Giant Panda in Sichuan with China Highlights!

Visitors can hold a giant panda at Dujiangyan Base

We have many giant panda tours, whether you've got 0.5-1 day to see the pandas, or want to work it into a greater tour of 10+ days.