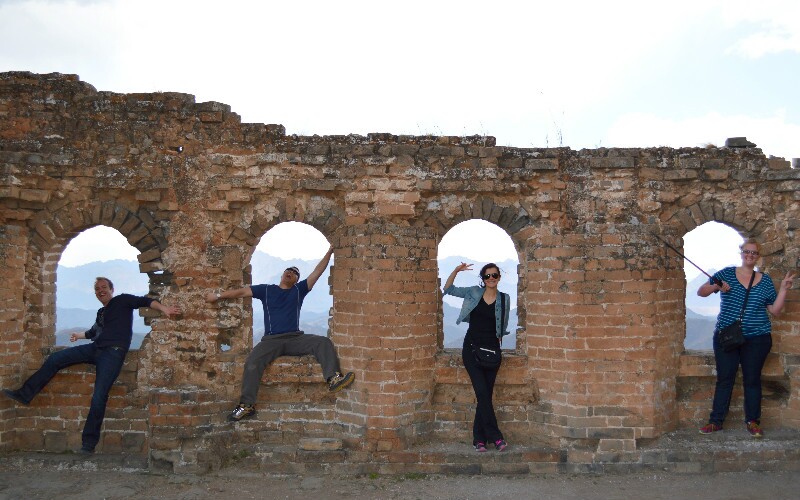 How Was the Great Wall Defended The Great Wall of China was built on the borders of the land belonging to the Han (majority Chinese) people and the northern nomadic tribes.

Its purpose was to prevent invasions from the nomadic tribes to the Central Plain of China. Below is how the soldiers stationed on the Great Wall defended against their enemies.

The Design of the Wall Made It a Strong Defense System

The average height of the Great Wall is 7.8 meters but it reaches about 14 meters in some sections. The width of the wall is about 4 to 5 meters.

Its height and width make it very solid and this prevented any enemies from intruding.

Most sections of the Great Wall were built on mountain ridges. This would exhaust an enemy army's effective strength by the time they reached the wall.

The Soldiers Played an Important Role in the Wall's Defense

The Great Wall itself was solid enough, but its successful defense relied on the soldiers who guarded it day and night. The soldiers had different jobs to do at each stage of a war. A watchtower on the Mutianyu Great Wall

The soldiers were stationed in the nearby fields and patrolled on the Great Wall to look out for enemy movement.

When they saw the enemy approach, the soldiers on a beacon tower lit a 'wolf fire' (they burned wolf dung to make a fire/smoke signal).

Soldiers at neighboring towers could see the smoke/fire during the day/ night, alerting the troops that the enemy was coming and a battle was about to start.

The soldiers on each watchtower had good lines of sight on the wall in between and its approach. There were about 25,000 towers on the Great Wall in total.

When they saw the enemy approaching the Great Wall, the archers on the wall would get ready with arrows to shoot the enemy soldiers from the nocks (arrow holes).

This method efficiently reduced the number of defending soldiers who were wounded, and greatly reduced the enemy offensive before they got near the wall.

Despite the use of archery, with the use of shields, enemy soldiers were still able to get close to the wall.

At this point, the troops on the wall would roll huge stones off the wall to crush and destroy their enemies and their ladders, and prevent them from climbing the wall.

Horses on the Wall The horse wall on the Great Wall

If enemies managed to get onto the wall, the defensive cavalry ensured it was difficult for them to move. Some sections of the Great Wall were wide enough for four horses to ride abreast.

When the defending soldiers retreated to the towers, cavalry could charge into the attackers.

The horse wall provided cover for the soldiers, slowing the enemy assault, and giving time for more defenders to arrive.

While slowing an enemy attack with a cavalry charge and more arrow fire from adjacent towers, reinforcements would be called to defend a breach.

The Great Wall was used for communication and rapid redeployment of a garrison. It was much quicker to travel along the wall top than on the surrounding mountain side.

Then the reinforced defenders would sally out from the watchtowers to retake a section of wall, squeezing the enemy between two shield walls.

Once the wall was retaken, any enemy who made it over or through were isolated and trapped within China, and could be relatively easily overpowered. If you are planning a Great Wall tour, please see our recommended itineraries for inspiration:

If you are not interested in the above, see more Great Wall tours .

Or just tell us your interests and requirements, and we can tailor-make your own unique China tour