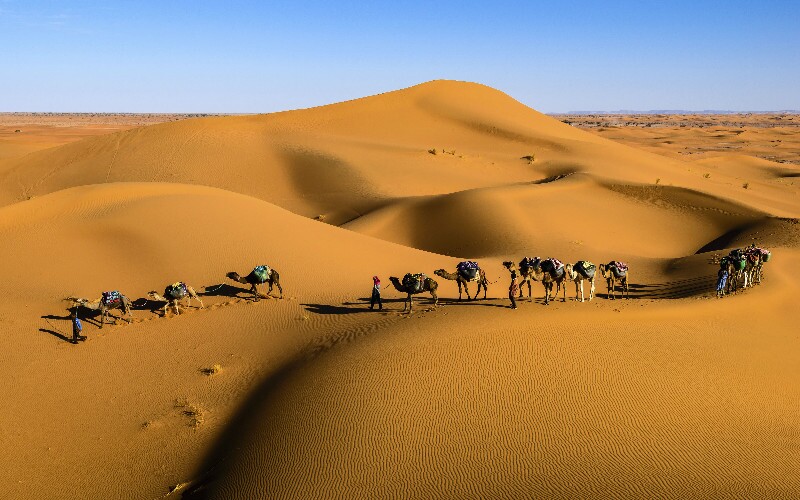 Here are the important things you need to know about the Silk Road's history, China's new Silk Road trade, and Silk Road tourism.

In 139 BC, in a search for allies in the far west, Emperor Wudi (156–87 BC) of the Han Empire sent Zhang Qian (200–114 BC) as an embassy to Central Asia, and they realized that trade and travel would be profitable and beneficial.

In 119 BC, the Silk Road started from Chang’an (now called Xi'an), China’s ancient capital, which was moved further east (and with it the Silk Road’s start) to Luoyang during the Later Han Dynasty (25–220 AD). The Silk Road ended in Rome.

3. It began to trade silk for horses.

The Han Empire was locked in a major war with the nomadic Xiongnu people, and the Han Dynasty wanted big Fergana Valley war horses for their cavalry to ride to defeat their enemies.

5. The Silk Road was the longest ancient overland trade route.

From Xi'an/Luoyang, through Central Asia, and to Constantinople on the eastern edge of Europe, the Silk Road covered about 6,000 kilometers or 4,000 miles.

6. Marco Polo was the most famous Silk Road trader/explorer.

Marco Polo (1254–1324) is famous for traveling to China's Yuan Empire when he was 17 with two relatives, becoming part of the government of Kublai Khan, returning with great wealth, and spreading accurate information about China.

At the fall of the Yuan Empire (1279–1368) Mongol trade routes were severed, and sailing ships began replacing trade by road. The Ming Empire (1368–1644) also turned officially isolationist in 1371 and banned almost all sea trade. See more on The History of the Silk Road in China.

The Chinese inventions of paper and printing enabled the scientific and industrial revolution in Europe.

Revolutionary world changes ensued due the opening of the Silk Road: major continental invasions, the spread of vast empires, vast regions destroyed by plagues, and crop and technology dissemination that led to the Renaissance, the scientific revolution, and the great growth of world population!

The transmission of Buddhism to China from India and Central Asia to the Han Empire via the Silk Road is thought to have mainly begun after 68 AD partly through the efforts of Emperor Ming (58–75).

Silk fabrics were very valuable, light and easy to transport on the Silk Road.

In 1877, Ferdinand Van Richthoten, a prominent geographer who worked in China from 1868 to 1872, coined the term "Silk Route" while making a Silk Road map, because the Chinese mainly traded silk. See What Was Traded on the Silk Road and Why.

The Chinese government believes it can greatly spur China's growth and influence by constructing land and sea transportation facilities to make trade and travel more economical and quicker and is announcing plans for this trillion dollar project.

The first freight trains from Europe to China began running in 2011 and have cut transit time from Germany to China from 50 days by sea to 18 days, and a major 5,400 kilometer highway to St. Petersburg from the Yellow Sea opened in 2018 that allows vehicles to travel the distance in 10 days.

13. Silk Road travel is booming too.

In 2018, compared to the year before, there were 38 percent more tourists in Altai in Xinjiang and 24 percent more in Uzbekistan than last year, and there was double the number of Chinese in Albania than in previous years.

All our tours are customizable. Contact us to create a Silk Road trip according to your group size, time, budget, interests, and other requirements.

Many modern day adventurers peg this as one of the key things they want to do. At China Highlights, we have Silk Road experts who can create the perfect trip for you for you for a rich experience and memories.