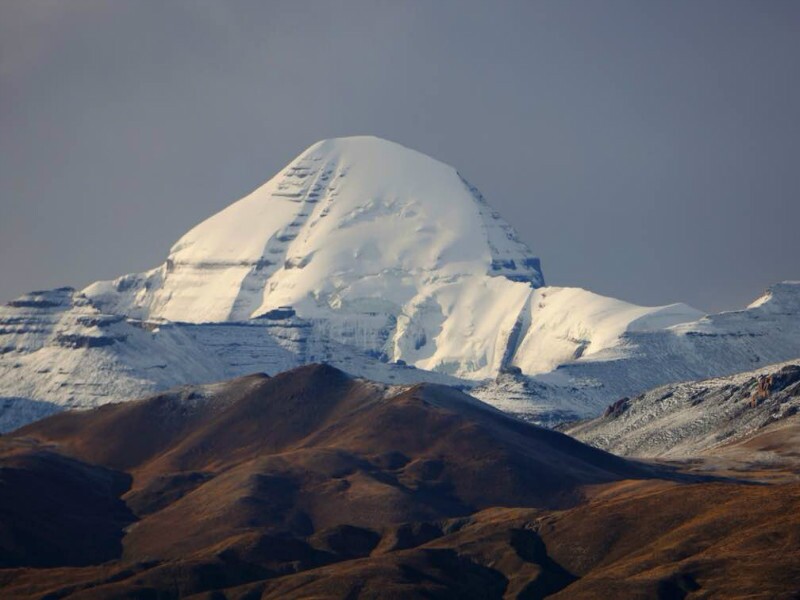 What are interesting facts about Mount Kailash?

Mount Kailash's Sanskrit name means 'heaven of Shiva', and it is a sacred mountain in four religions. For centuries, Mount Kailash has also been also a mecca for adventurous explorers, but it has never been climbed.

Mount Kailash is a mere 6,638 meters (21,778 feet) above sea level, the most famous peak of the Kailash Mountain Range. It is the second tallest peak in the Kailash Range, but the most isolated. The tallest one, Lunpo Gangri with an altitude of 7,095 meters(23,278 feet), has less prominence.

Mount Kailash has the most snow cover of the Kailash Range peaks, which lasts all year round. Its snow-capped peak shining in the sunlight makes it stand out from the surrounding mountains, and its singularity has no doubt led to its religious status.

Mount Kailash is more than 2,000 meters lower than the world's highest peak, Mount Everest. However, no one has ever climbed to Mount Kailash's summit. All climbing plants have been abandoned due to government prevention, religious pressure, or personal conviction.

For example, in Hinduism or Tibetan Buddhism, Mount Kailash is a sacred mountain where a deity resides (Shiva or Demchok). Climbers would be perceived to disturb the sanctity of the mountain.

3. Kailash is a sacred mountain for four religions.

Mount Kailash is the sacred mountain for four religions: Tibetan Buddhism, Hinduism, Bön, and Jainism. They have different beliefs and gods, but they all think that recognize it as "the center of the world" and regard it as their holy mountain.

In Hinduism: In Hindu mythology, Mount Kailash is said to be an abode where Lord Shiva (the principal deity) lived with his consort Parvati.

In Tibetan Buddhism: Tibetan Buddhists believe that Kailash is the residence of Shengle Vajra (the Buddha Cakrasamvaraor Demchok) who represents endless happiness.

In Jainism: According to Jain scriptures, Mount Kailash is the site where the founder Rishabhadeva was liberated.

In Bön: This religion that originated in the Kailash region regards Mt. Kailash as a ladder for the gods to descend to earth and ascend to heaven. They believed there were 360 Gods of Bon residents in the mountain.

4. The top of Mount Kailash is a pyramid.

Observers theorized that the top of Mount Kailash was a huge ancient manmade pyramid rather than a mountain. According to preliminary estimates, the direct height of the pyramid is 1,800 meters (5,900 feet), compared with up to 146 meters 480 feet) in Egypt.

Scientific investigation shows that Mt. Kailash is not a manmade pyramid, but a natural pyramid landform. Under the erosion of ice and snow, the mountain was formed in a stepped shape like that of a pyramid.

5. There is a mysterious swastika symbol (卍) on Kailash's south face.

The early settlers, those of the Bon faith, in the Kailash region call Kailash 'Nine-Story Swastika Mountain'. The swastika is an ancient icon in the Bon religion.

On its southern slope, you can see a (partial)left-facing swastika symbol (卍), formed by shadows of the huge vertical ice fissures and horizontal rock layers as the sunsets. The bottom half is quite clear; the top half is less clear above the snow line.

The left-facing swastika is a symbol of spiritual power in Mahayana Tibetan Buddhism and Bon beliefs representing eternal existence, auspiciousness, and protection.

The Kailash-Manasarovar area is the source (of major tributaries) of three famous rivers in South Asia.

There are more than 250 glaciers in the Kailash Range whose melt waters flow into the mythical Lion, Horse, Peacock, and Elephant rivers. In fact, they are the upper reaches (major tributaries) of the Indus, Ganges (Karnali), and Brahmaputra.

They run through thousands of kilometers west, south, and east, and then return (as their waters come from Indian Ocean monsoon winds) to the same destination — the Indian Ocean.

7. Magic Feature that Kailash has a snowier south face.

The south side of a mountain (in the northern hemisphere) gets more sunlight, so there should be less snow on its southern slopes than that on the north face. Quite contrary to this, the south face of Mt. Kailash is covered with glaciers and snow all year round, but the north side has relatively little snow.

This natural wonder is due to the geographical location and climate of Kailash. The southern slope of Mount Kailash faces the Indian Ocean from which the summer monsoon brings abundant annual precipitation. The moist air rising above the southern slope easily forms snow, but on the northern side, the air is relatively dry.

8. Mt. Kailash is the Axis Mundi (spiritual axis ) of the Earth.

In Hindu, Buddhist, and Jain mythology, Mt. Kailash is regarded as the axis of Earth (Axis Mundi in Latin) or the center of the world. This axis is believed to be the point where heaven meets earth.

Mt. Kailash is therefore a sacred place for pilgrims to meditate and make a connection between the physical and spiritual worlds.

China permits no helicopter access to Mount Kailash. On the Nepal side, you can take a helicopter from Tribhuvan International Airport in Kathmandu to a helipad near the Gyirong Nepal-China border, and then go to Mount Kailash by land transfer.

See more about how to get to Mt. Kailash and enter Tibet from Nepal

10. Tibetans prostrate themselves every few steps on a Kailash pilgrimage.

Tibetan pilgrims believe that a pilgrimage to the holy mountain can wash away the curses of their life. Pilgrims making a Kailash kora (a trek around Kailash) are expressing their worship to the sacred site and the deities believed to reside there.

It is said that walking ten circles around the mountain can save them from the suffering of hell, while those walking a hundred circuits of Kailash can attain Buddha-hood and ascend to heaven in this life.

In a year of the Horse, (when Sakyamuni was born)a circuit around the mountain is believed by Buddhists to be equivalent to 13 circuits in other years.

Lake Manasarovar sits south of Mount Kailash. It is a pilgrimage site as well. Hindus walk around the holy lake as part of their pilgrimages. Hindus also believe that a bath in the holy lake can wash away the sins of a lifetime.

How to Plan a Tibet Trip in 2021 — Suggestions and Ideas

12. Kailash is an area of unsolved mysteries!

These three Kailash mysteries have been investigated but their results are still inconclusive.

Tour with Us to See Mount Kailash

Whether you are a pilgrim wanting to make a yatra or an ordinary traveler wanting to see the sacred mountain, we can help you. We are experts at tailor-making tours to customer requirements. Let us create an dream itinerary from your ideas.

Check out our customizable Tibet tours.