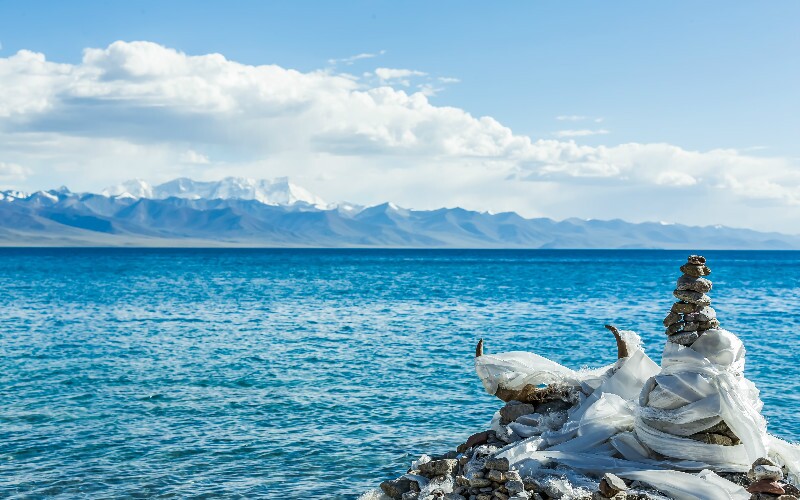 9 Most Sacred Lakes in Tibet

Namtso means ‘Heavenly Lake’ in Tibetan. The lake is 70 kilometers long from west to east and 30 kilometers wide from south to north, with an area of 1,940 square kilometers. It is the largest salt lake in Tibet and the second largest in China.

Namtso is the highest salt lake in the world at 4,718 meters (15,479 feet). According to historical literature, the lake is said to have descended from the sky to earth, and so it was called Namtso, i.e. Heavenly Lake. Herdsmen living near the lake say that the lake has such high elevation that it is like it is hanging in the air.

Nyenchen Tanglha (念青唐古拉山) is a mountain with perennial snow to the south. There is a plateau and hills to the north and west. It has a wide lakeshore and grasslands all around.

Namtso Lake is formed in the tertiary depression of the Himalayas, so it is a depression lake. The lake keeps receding, and several ancient lake shorelines have been left as evidence. The highest one is about 80 meters above the present water level.

A legend says Namtso is the daughter of the god Indra (the mythological king of the abode of the gods) and the wife of Nyenchen Tanglha (念青唐拉).

The goddess of the lake has a cyan body, three eyes, and two hands, with an aquarium on her right hand and a mirror on her left. Her hair is raised in a high bun with the other hair falling on her back. She rides a blue dragon and is quite charming.

Basum Lake is the sacred lake of Nyingma (one of the Tibetan Buddhism schools), and one of the largest freshwater lakes of eastern Tibet. It is surrounded by mountains and has a mild climate.

The average elevation is 3,538 meters above sea level, and the length and width are 15 kilometers and 2.5 kilometers respectively. The depth of the lake is 166 meters. Basum means ‘Three Rock’ in Tibetan.

From Lhasa drive for 33 kilometers along the Sichuan-Tibet highway to Dagtze County. It is 47 kilometers from Gandan Temple to Maizhokunggar County and Riduo Xiang Nian Cun (日多乡念村).

Then “climb” up Myra Pass (米拉山口), altitude of  5,087 meters. Drive for another 211 kilometers to Gongbo'gyamda County (工布江达县), then towards Nyingchi (林芝县) for 61 kilometers to arrive at Bahe Zhen (巴河镇), which cannot be found on the map.

There you can find the road sign to Basum Scenic Area on the left exit as you exit the town. This is where you leave the Sichuan-Tibet Highway. After 44 kilometers is Basum Lake.

The road conditions are good with all asphalted roads. The driver should be careful on the mountain road around Myra Pass (米拉山口), which is brimming with a great many sharp turns.

Tangra Yumco (当惹雍错) is the largest sacred lake that Bon religion adherents believe in and worship.

It is also the third-largest lake in Tibet with an area of 1,400 square kilometers, a length of 70 kilometers, and a width of 20 kilometers. Its elevation is over 4,600 meters above sea level. It is lurking on the wild and remote land in west Tibet.

It is sometimes mentioned in folk tales and legends, though people seldom know much about them, and there is no mention of those who have been there.

In an ancient arid age, it is said the god of Daguo Mountain came to Duilong from Wenbu District (文布地区) to seek for superior Tibetan barley seed. His behavior irritated the local gods and they ran after him.

When the fresh young green seedlings grew, this kind couple was greeted with the cheers and crying of the herdsmen. Subsequently, the barley tsampa (青稞糌粑) of Wenbu has become the sweetest food in Tibet.

Raksas Tal lies by the holy lake Manasarovar, on its west. The blue Devil Lake has an outline like a crescent moon. Manasarovar, however, is shaped like the sun.

When Tibetans pay respects to the holy lakes they also worship Devil Lake because of their tolerant understanding and cheerful kindness.

The devil lake and holy lake are not far away from each other, and between them, there is a waterway making them interlinked.

However, the two lakes have absolutely different water quality: the water of the holy lake is clear and sweet, and that of Devil Lake is bitter and astringent.

Such polar opposites are plentiful in Buddhist symbolism, like the devil and Buddha mother hugging each other, which tells us the whole universe is of harmonious and unified spirit.

The holy lake and the devil lake ripple mildly in the breeze without any complaint or sorrow. Only eternal waiting is what they have in common.

5. Manasarovar - the Mother of the Holy Lakes

In the eyes of the Tibetan, Ngari (in the west of Tibet) is the horizon of the sky. It is more than 2,000 kilometers from Lhasa and is almost impossible to get to.

Therefore Ngari is called the “ridge of the roof of the world”. This is the amazing place where Manasarovar lies.

According to the Tibetan holy book Tripitaka, after nine mountains to the north of India, there is a large snow mountain. Under the snow mountain is the origin of the four Asian rivers.

The big snow mountain in the Buddhist scripture is the holy Mt. Kailash and Manasarovar is the origin of the four Asian rivers. There is the Yarlung Zangbo River in the east, Kongqi River in the south, Sutlej River, and Sengge Zangbo(Lion River) in the north.

Buddhists think that Manasarovar is the holiest lake, a gift that Shengledazun (the god who created the Buddhist doctrine, 胜乐大尊) gave to the world. Its holy water can wash off the sorrow and evilness at the bottom of the heart.

It is also the oldest and holiest holy land of Buddhism, Hinduism, and Bonpo (苯教). Manasarovar is considered the perfect lake of the spirit, the real heaven of the universe, and the Shangri-La of the gods.

The elevation of Manasarovar is about 4,500 meters above sea level, and its depth is 77 meters. The perimeter of the lake is about 90 kilometers.

Lamu Nacuo (拉母那错) is shaped like a skull, so Tibetans believe the lake is formed by the melting of the goddess. The lake is the place on which the soul and spirit of the goddess are said to rest.

Standing in the remote mountains, with an elevation level with the snow line, she is little known by people. Far fewer people are lucky enough to get there to pay their respects.

Seen as the holiest revelatory lake in Tibet, the status of Lamu Nacuo has never been shaken through hundreds of years of disputes.

Whenever the Dalai Lama or Panchen Lama passes away, Buddhists go to Lamu Nacuo to receive revelation, so as to get the most direct and realest picture before finding out the reincarnated soul boy.

For example, they search for revelation about the mountains and rivers and the villages and houses of the boy’s home, and even his appearance and behavior in his childhood.

People who walk around the lake and leave treasures are said to be able to see a Lama's previous and future life. Lanmu Nacuo is so amazing, with her quiet, plain, and kind appearance.

When standing on the top of Mount Baalah, rather than Yamdrok Lake, you may first see the peak of Noijinkangsang rising from the mountains, but you certainly can not ignore its existence for long.

Yamdrok Lake is called the most beautiful water in the world. The Tibetan means ‘green jade lake on the pasture’. It is regarded as the turquoise earring that a goddess scattered before the eyes of the Tibetans.

The three lakes, in addition to Yamdrok Lake, are linked hand in hand, foot by foot, to form the boundless holy lake beyond our eyes. She wings among the mountains for over 130 kilometers.

Only on a map can you surprisingly find that she is like an earring affixed to an ear-like mountain range. As the sun shines on Yamdrok Lake at different times she will appear dreamy blue with rich spectral levels.

One of the wonders of Yamdrok Lake is that the water originates from the snow water of Nyenchen Tanglha. However, despite there being no outflow, there is no change in the water level at all. The influent snow water and the natural evaporation have an amazing dynamic balance.

8. Siling Lake - the "Ghost" Lake Where the Big Devil Perches

Siling Lake is on the south of Qiangtang Plateau, with an elevation of 4,530 meters. It is 72 kilometers long from west to east, and 22.8 kilometers wide on average.

The widest eastern part is 40 kilometers wide. Its area is 1,640 square kilometers, and it is the largest lake in Tibet.

Siling is the big devil who used to live west of Lhasa. He was always swallowing thousands of living creatures including beasts and men. Everyone felt troubled by him.

On a morning, after a heavy storm, Padmasambhava (莲花生大师, the creator of the Tibetan religion Red Sangha), who had been slaying demons, finally found Siling.

Unable to repel Padmasambhava, Siling fled to a vast muddy lake on the south of Gangni Qiangtang (冈尼羌塘). Padmasambhava commanded him to stay in the lake and never to leave it, and not to kill the creatures in the water. Subsequently, the lake was named Siling Lake.

Pangong Tso Lake is located north of Ngari in the west of Tibet. Though it doesn’t have a peculiar and sacred religious significance, it is well known by local people.

The lake is long and its western end is in Kashmir, where it is a saltwater lake with little animal or plant life. Its middle and east part is freshwater, and there are abundant fish and waterweeds.

Tailor Make Your Tour to the Lakes

If you are interested in traveling to one of the lakes above, you can tailor-make your own unique tour by telling us your interests and requirements. We will help you design a perfect trip.