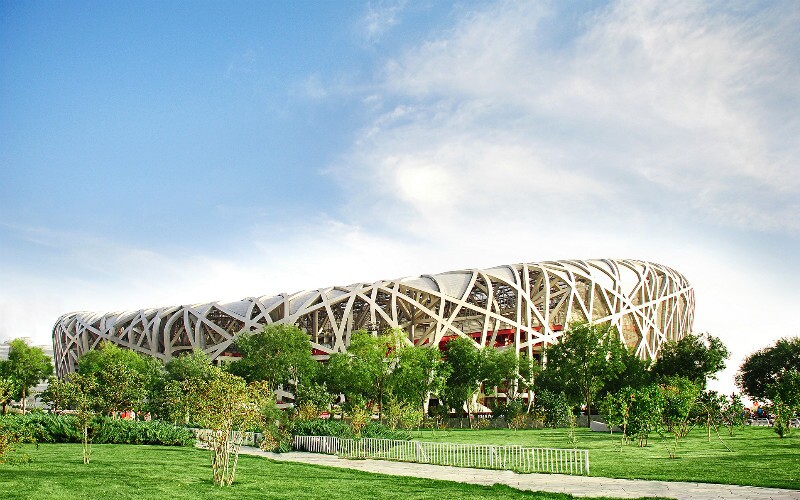 The architecture of modern China represents some of the world’s most daring design plans and visually stunning achievements. Tourists who visit China will marvel at the feats accomplished by some of the most respected architects the world has ever seen.

The first site most visitors see when they arrive in China is Beijing International Airport. The airport was constructed in the 1950s, but in 2008, in conjunction with the Summer Olympics, a third terminal was completed.

At the time of its construction, this terminal represented the world’s largest man-made structure in terms of floor space. Beijing International Airport has an indoor garden, a children’s playground, and over 70 food establishments in Terminal 3 alone.

The Shanghai World Financial Center is known for far more than the offices that call the building its home. Completed in 2008, SWFC took over 10 years to complete due to financial shortages and construction delays. Since its completion, it has won numerous architectural awards.

Tourists are welcome at SWFC’s observation deck, which at 474 meters (1,555 feet) above ground is the world’s highest enclosed viewing platform (the highest outdoor observation deck is on the Canton Tower). Our Shanghai tours include a visit to SWFC.

Those who are not afraid of heights might consider staying at the Park Hyatt Shanghai, the world’s second highest hotel.

The National Aquatics Center, or The Water Cube

The Water Cube, as it is colloquially known, was constructed for use during the Beijing 2008 Summer Olympics. Now, visitors can both marvel at the architecture of the building and enjoy the indoor atmosphere as well.

Among the offerings of the Water Cube are a restaurant and bar, a full-service spa, a shopping area, and Water World, a family water park.

The National Stadium, or The Bird’s Nest, Beijing

Along with the Water Cube, the National Stadium was designed chiefly for the 2008 Summer Olympics. It is often referred to as the Bird’s Nest due to the outer “nest” of additional steel that was incorporated into the design in order to hide the numerous steel trusses.

The National Stadium can hold up to 80,000 people. Because of its versatility, it has been used for a winter theme park, the Supercoppa Italiana, and multiple other events. Currently, the National Stadium’s chief income is as a tourist attraction. It reportedly draws more than 20,000 tourists every day.

Our Beijing Highlights with Olympic Glories tour includes an exterior view of the Water Cube as well as the National Stadium.

National Center for the Performing Arts

National Center for the Performing Arts

The titanium and glass dome that encapsulates Beijing’s National Center for the Performing Arts was completed in 2007. The building is surrounded by a man-made lake, requiring guests to enter via an underground hallway.

Known by locals as the Bird’s Egg due to its resemblance to an egg floating in water, the building is home to an Opera Hall, Music Hall, and Theater.

Other Modern Buildings of Note

Linked Hybrid in Beijing is an apartment building that has received numerous awards for its unique structure and design.

Central Chinese Television’s headquarters in Beijing are housed in a building that contains numerous horizontal and vertical structures. Though construction completed in 2009, much of the building is still unused.