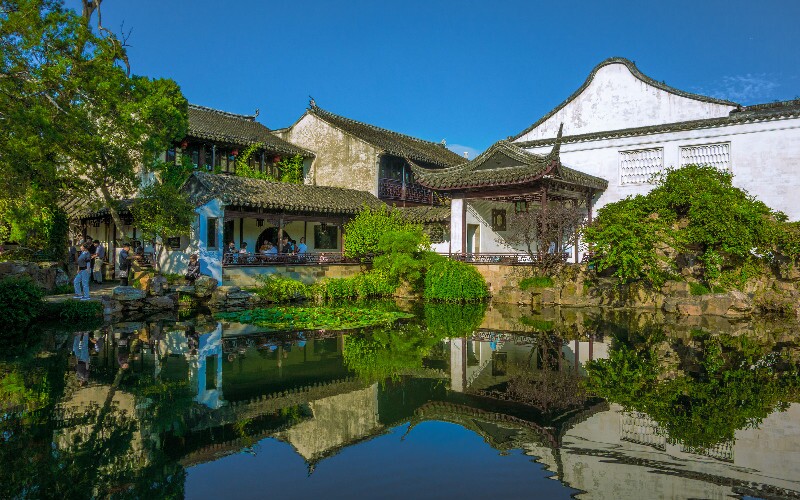 The imperial families of yesteryear and private families throughout Chinese history have created numerous gardens that have become world renowned for their beauty and design.

Royal gardens have been a pet project of many emperors and empresses throughout China's long history. While gardens from the earliest dynasties have faded into history, many Qing-Dynasty (1644–1911) gardens remain. At one time, only members of the royal family and their guests or servants were allowed to experience the beauty of these massive garden complexes, but in modern times, they are open to ordinary people.

Beautiful lotus in the Summer Palace

In the northwest corner of central Beijing, the Summer Palace is a well-preserved garden built during the Qing Dynasty. The imperial family spent summers at this garden during the 1800s and early 1900s in order to escape the heat of the Forbidden City complex. The garden features airy pavilions, verdant hills and a central lake that is ideal for boating.

The Imperial Mountain Resort in Chengde is the largest royal Chinese garden in existence. Twice as large as the Summer Palace, this garden espouses the most traditional elements of classic Chinese gardening, and contains features meant to represent famous scenic areas in China. The Manchu emperors would stop at Chengde Mountan Resort on their annual journey north.

Private gardens in China are more intimate than the grand imperial gardens, but their simplicity offers a unique form of beauty. These gardens were often used for parties, such as those during the autumn moon festival. One important characteristic of many private Chinese gardens is a rockery.

The gardens of Suzhou are well known throughout China. In fact, the UNESCO World Heritage Committee added these gardens to its World Cultural Heritage list in 1997 and they have been nominated as one of the Top Ten National Landscapes in China. One major characteristic of Suzhou gardens is their use of free styles that incorporate distinct artistic patterns in each garden. Some of the important and most treasured private gardens of the area include:

The Humble Administrator’s Garden: This garden was created in 1509 and features a large water feature at its center. The garden is at its best when the lotus flowers are in bloom in late summer.

Lingering Garden: This garden was built in 1566 and encompasses Ming Dynasty garden styles.

Master of the Nets Garden: This ancient garden, which is also known as Wangshi Garden or Fisherman's Garden, was first built in 1180, during the Song Dynasty, and brought to its present glory during the Qing Dynasty in the 1800s and early 1900s.

Its small, ornate and intimate design brings to mind the mysteries of a long-gone era. At night, lanterns are hung in the garden and performances held in different pavilions and halls throughout the garden.

Huanxiu Villa: This Qing-Dynasty-era garden is made up of many man-made hills, a tranquil pool, impressive rockwork and pavilions from which visitors can enjoy the scenery.

Yangzhou acts as a communication center between North China and South China, and hosts private gardens that incorporate the most impressive components of each area's characteristic garden styles. The Yangzhou gardens have been deemed the best in the world by some, and their grandness and elegance remain unparalleled.

Rockeries are a prominent feature of Ge Garden (Ge Yuan /ger ywen/), and there are different rock forms arranged to present the beauty of each of the four seasons. By following a path around the garden, guests can experience all of the seasons in a single day. Large stalagmites in a bamboo forest represent springtime. Summer is indicated by lake stones around a lotus pool. The autumn view is best seen from atop the Huangshi Rockery. Snow rocks are displayed to bring to mind the beauty of winter.

He Garden (He Yuan /her ywen/), which is also known as Jixiao Mountain Villa, features a winding corridor that brings visitors to every corner of the site. Built in the Qing Dynasty, this garden has influences of both traditional Chinese gardens and western architectural and garden styles, making it one of the best east-meets-west gardens in the country.