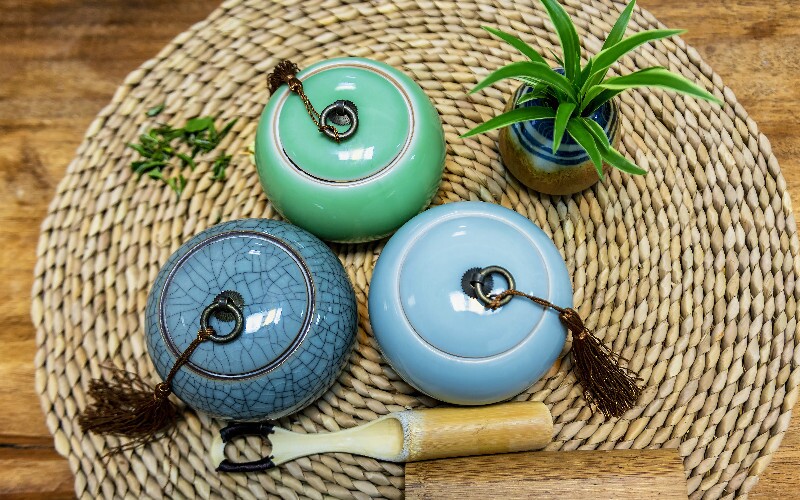 The 7 Most Common Tea Sets in China

Chinese people attach great importance to what kind of tea set they use. They believed that the tea set affects the flavor and experience of the tea, and different materials have their unique usages. Here are the 7 most common tea set types in China.

Pottery is the earliest material that tea sets were made from in China and is believed to be the best material for tea-brewing.

Among pottery tea sets, purple clay sets are believed to be most suitable for brewing tea, since this clay is uniquely able to store and release the fragrance of tea. Yixing clay teapots, also called purple clay teapots, are considered the best.

They are produced near the city of Yixing in Jiangsu Province.

The amazing and unique quality of the Yixing clay teapot is that each time tea is brewed, it absorbs the tea's flavor. After being used many times, the pot itself can flavor the boiled water, without adding any fresh tea leaves.

Porcelain is the most widely used material for tea sets. Undoubtedly, China is famous for porcelain. It has a long history of usage and porcelain tea sets are very widespread. It also has a high value of art appreciation.

Porcelain originated in China around 2,000 years ago. There are many kinds of porcelain tea set in China. The main five are celadon, painted porcelain, white, black, and rice-pattern decorated sets.

Lacquer is a special liquid painted on wood or metal, in order to protect it and make it shiny.

The Chinese have used lacquer tea sets since the Qing Dynasty (1644-1912 AD) and Fuzhou, the capital of Fujian Province, is a well-known source of such tea sets.

The advantages of lacquer tea sets are enormous. They are not only resistant to damage from water, high temperatures, and acid corrosion, but can also be highly artistic with beautiful hand-painted designs.

Using a glass tea set is the best way to enjoy the tea-brewing process thanks to its transparent material.

Glass is relatively inexpensive and easy to shape. The biggest complaints with glass tea sets, however, are that they are easily broken and it's easy to scald your hands when using them.

A metal was one of the oldest types of household implement in China, but now it's rarely used. At first, people used bronze utensils for tea, especially during the Qin (221-207 BC) and the Han (206 BC-220 AD) dynasties, when the new beverage was becoming increasingly popular.

Nowadays, people rarely use metal tea sets for brewing tea, as they think doing so will cause the tea to lose its fragrance. The tin tea caddy, however, is very popular for its good sealing quality and superior blockage of moisture and light.

An enamel tea set is a popular craft item in many countries. Enamel is a material made by fusing powdered glass to a substrate by firing. The powder melts, flows, and then hardens to a smooth, durable vitreous coating on metal, glass, or ceramics.

Production originated in ancient Egypt and was then introduced to Europe. Around the time of the Yuan Dynasty (1271-1368 AD), enameling technology was introduced to China and, during the reign of Emperor Jingtai (1449-1457 AD) of the Ming Dynasty, Chinese-style enamel objects were produced in the cloisonné style.

Enamel tea sets have many excellent properties: they are smooth, hard, chemically resistant, durable, scratch resistant, have long-lasting color fastness, are easy to clean and do not stain.

Wood and bamboo are the cheapest materials for a tea set. Although tea-drinking became popular after the Qin Dynasty, most of the tea utensils at the time were still crude. The tea-ware used by poor people in society was usually made from wood and bamboo.

Wood and bamboo tea sets also have many excellent properties: wood and bamboo are abundant and easy t shape; they don't pollute the tea and, therefore, are healthy; and they're economical and practical.

We have designed tours especially for tea lovers to have an in-depth tea culture experience in China. Travel with us to learn more about Chinese tea.

Here is one of our most popular tours for inspiration: