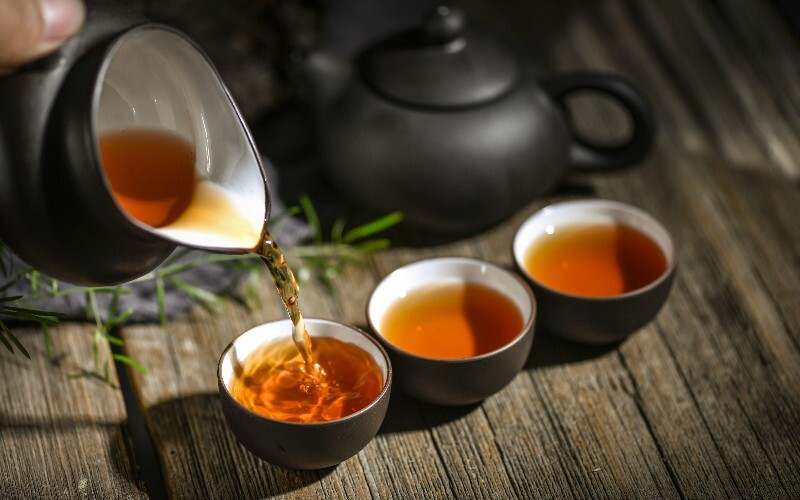 7 Types of Tea in China

Tea is the national drink in China. In addition to its prominence in Chinese culture, tea also claims many health benefits, making it a popular drink worldwide. There are several types of Chinese tea, which vary in degree of fermentation and processing.

Chinese green tea is the oldest and most popular type of tea; it has been enjoyed in China for several thousand years. Green tea is made from the new shoots of the tea plant, and the tea leaves are dried and processed according to the type of tea desired.

The techniques for processing green tea are sub-divided into three categories: water removing, rolling, and drying. Traditional green tea has a pale color and a sharp, astringent flavor. It is produced primarily in the provinces of Jiangxi, Anhui, and Zhejiang. The most famous green tea is West Lake Dragon Well Tea , which is produced in Hangzhou.

Yellow tea is produced by allowing damp tea leaves to dry naturally. It has a distinctive aroma, similar to red tea, but its flavor is closer to green and white teas. Yellow tea is also used to describe the high-quality tea that was served to the emperors, as yellow wsa the traditional imperial color.

Junshan Yinzhen is produced in China's Hunan Province and is the country's most popular yellow tea.

White tea is unfermented, uncured green tea that has been quickly dried. It is indigenous to Fujan Province, and is lighter in color than other types of tea with a subtle, delicate flavor.

White tea got its name from the tradition of poor Chinese people offering plain boiled water to guests, if they had no tea, and calling it "white tea".

Oolong tea, also known as blue tea, is unfermented tea with unique characteristics. Made from a blend of green and red teas, oolong tea boasts the best flavors and aromatic qualities of both. Sometimes called "green leaves with a red edge", oolong tea is thought to aid in fat decomposition and is widely regarded as a weight loss aid and a beauty enhancer.

Black tea is the second largest category of Chinese tea. It is made from the new shoots of tea leaves, which are wilted, rolled, fermented, and dried. The resulting infusion yields a lovely red color and a subtle aromatic fragrance. Keemun is the most popular brand of black tea.

It is generally acknowledged that dark tea originated in the 16th century in Anhua City, Hunan Province.

Pu'er tea is actually a dark tea, but deserves a category on its own because of its distinguishing features.

Pu'er tea, originating from Yunnan Province, has an ancient history over of 2,000 years. According to Yunnan government's definition, Puer tea must be tea that is made from a large-leaf variety of a plant growing in a defined area, which is then processed into compressed tea or brick tea with a specified technology.

Pu'er tea was listed as a geographical indication product' by the General Administration of Quality Supervision, Inspection and Quarantine on August 5, 2008. It stipulates that only tea produced in Yunnan's 639 towns in 11 prefectures and cities, including Pu'er and Dali, can be called Pu'er tea.

There are two distinct types of Pu'er tea: sheng Pu'er (the raw or green Pu'er) and shu Pu'er (the ripened or black Pu'er).

Our tours are customizable— tell us your interests and requirements and we will help you to tailor-make a Hangzhou tour.

We are able to help arrange tickets to attractions, your preferred mode of transportation, and our recommended accommodation, as well as a top guide to help you have the best China experience with China Highlights.