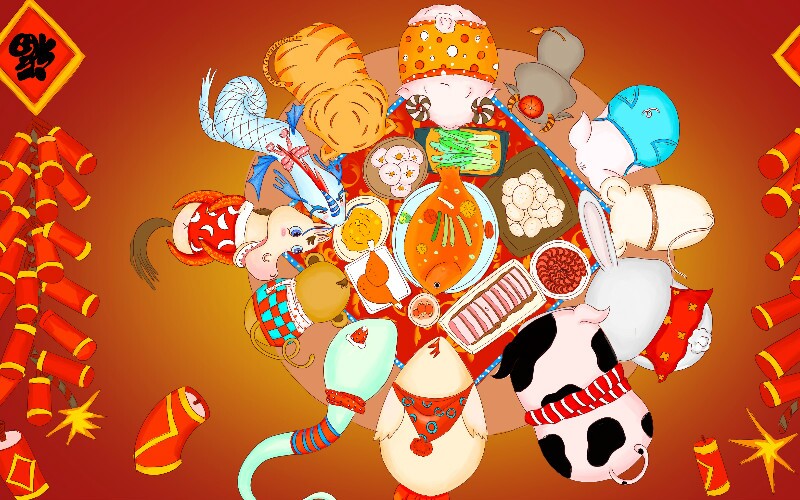 Where You Can Find the Chinese Zodiac - The Top 9 Uses

For most Chinese people, their zodiac animal sign has been a symbol for their lives since their birth, and some believe their personal characteristics are related to their zodiac sign. You can find the zodiac in many elements of Chinese culture.

The Zodiac in Clothing

Chinese people believe in the zodiac's totem culture. For example, a dragon symbolizes power, nobleness, and honor in China, so the Chinese emperor's robe had nine dragons on it and was called the "dragon robe".

In addition, people wear red in their zodia year (Ben Ming Nian). According to Chinese astrology, people in their zodiac year are believed to have offended Tai Sui, the God of Age, and are given his curse. It is believed to bring nothing but bad luck, and the best way to drive away bad luck is by wearing red.

The Zodiac in Geographical Names

In China, everyone has his or her own zodiac sign, and every zodiac sign corresponds to a unique city in China, whether it's big or small.

For example, Beijing is the "Tiger City". Tigers represent the supremacy of an emperor, whose majesty is fully reflected in Beijing. What's more, "Goat City" is the nickname of Guangzhou. In Chinese culture, goats symbolize happy events and good luck. Learn more about China's Zodiac Animal Cities. The Zodiac in Paper Cutting

The 12 zodiac signs are always the main theme of paper cuttings in China.

People use a different zodiac sign for paper cuttings in each zodiac year.

The Zodiac in Postage Stamps

In China, a new zodiac-themed stamp will be published each year, another product of the Chinese zodiac culture.

The Chinese Post Office published the first zodiac stamp in 1980, the year of the Monkey, and there have been four rounds of this particular sign stamp published up to 2016.

Even though it covers less than a square inch (6cm2), the cultural heritage it contains still makes the Chinese crave it.

The Zodiac in Marriage In ancient times, people were faithful to their Chinese zodiac compatibility and often referred to it before a romantic relationship began. Even nowadays, some people still refer to it. For more details, see Chinese Zodiac Compatibility.

The Zodiac in Accessories

For example, "Roosters" are better off wearing accessories displaying a dragon, a snake, or an ox. Rabbit, rooster, and dog themed accessories are considered offensive to Roosters. The Zodiac in Kung Fu

One of the most famous cultural hallmarks of China, kung fu also contains the 12 zodiac cultural elements. In Chinese kung fu, there are many imitations of and references to the 12 zodiac animals.

The most familiar example is the Five-Form Fist in the movie Kung Fu Panda. The five forms include: Tiger, Leopard, Monkey, Snake, and Mantis. Three of them belong to the 12 zodiac signs.

The Zodiac in the Spring Festival The most direct way to discover the current zodiac year is to walk in the streets during the Spring Festival, and the decorations will give you the answer.

Each Chinese New Year, there is one of a repeating 12-year cycle of themes, according to the zodiac year. Undoubtedly, red is the eternal theme, then the zodiac sign of the year will appear in most things you can imagine: red envelopes, couplets, paper cuttings, children's toys, and calendars.

The Zodiac in Famous Art

In 2013, the bronze rat and rabbit heads were returned to China by the French art-collecting Pinaut family and, in the following week, they attracted 50,000 visitors as they were displayed at the National Museum of China.

The 12 Bronze Zodiac Head Sculptures triggered worldwide concern and protests in China as the two bronze heads were auctioned in Paris in 2009.

The two bronze head sculptures were part of a collection of 12 bronze sculptures, which were once displayed in the Summer Palace in Beijing, and were stolen during World War Ⅱ. Over the past decade, finding these 12 items became a goal for Chinese patriots.

Chinese Zodiac Year of the Snake