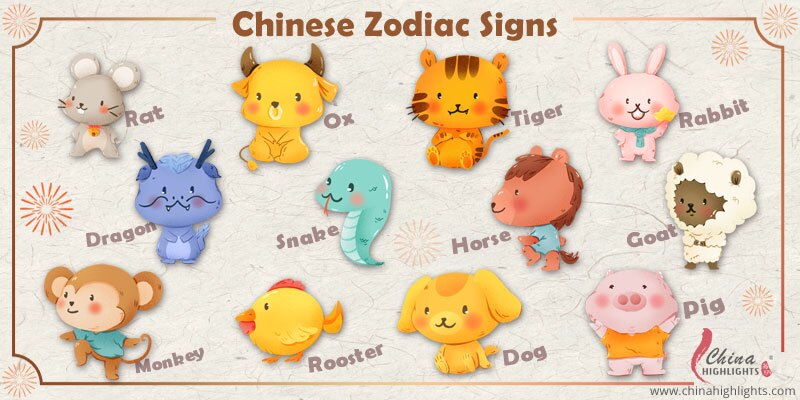 There are 12 Chinese zodiac signs, in the following order: Rat, Ox, Tiger, Rabbit, Dragon, Snake, Horse, Goat, Monkey, Rooster, Dog, and Pig. Each sign is named after an animal, and each animal has its own unique characteristics.

Do you know why the 12 Chinese zodiac animals are in the sequence above? The following story reveals legendary reasons, and some of the characteristics of the 12 animals.

The story is widespread (and widely varying) among Chinese. Though it is made up, it might be interesting for you to tell your children and friends.

Long, long ago, there was no Chinese zodiac. The Jade Emperor wanted to select 12 animals to be his guards. He sent an immortal being into man's world to spread the message that the earlier one went through the Heavenly Gate, the better the rank one would have.

The next day, animals set off towards the Heavenly Gate. Rat got up very early. On his way to the gate, he encountered a river. He had to stop there, owing to the swift current. After waiting a long time, Rat noticed Ox about to cross the river and swiftly jumped into Ox's ear.

The diligent Ox did not mind at all and simply continued. After crossing the river, he raced towards the palace of the Jade Emperor. Suddenly, Rat jumped out of Ox's ear and dashed to the feet of the Emperor. Rat won first place and Ox was second.

Competitive and Fast: Tiger and Rabbit

Tiger and Rabbit came third and fourth because both are fast and competitive, but Tiger was faster. (Rabbit got across the river by hopping on stepping stones and a floating log.)

Good-looking Dragon was fifth and was immediately noticed by the Jade Emperor, who said Dragon's son could be sixth. But Dragon's son didn't come with him that day. Just then, Snake came forward and said Dragon was his adoptive father; so Snake ranked sixth.

Kind and Modest Horse and Goat

Horse and Goat arrived. They were very kind and modest and each let the other go first. The Jade Emperor saw how polite they were and ranked them seventh and eighth.

Monkey had fallen well behind. But he jumped between trees and stones, and caught up to be ninth. Last were Rooster, Dog, and Pig.

These 12 animals became guards of the Heavenly Gate.

Why No Cat - Enmity Between Cat and Rat

Although Cat and Rat were neighbors, the former always bullied the latter, and Rat felt very angry but dared not say it out loud; therefore, he sought revenge on Cat.

Upon hearing the Emperor's decree Rat chuckled to himself and thought: "This is an opportunity".

The sleepyhead Cat kicked open Rat's door, ordering Rat to keep him informed of when he was going to the Emperor's birthday party, and Rat readily promised that he would.

On the morning, however, Rat left quietly without informing Cat. Cat didn't wake up until the race was over and it was too late - he was not able to make it into the cycle.

After the party, a great enmity grew between Cat and Rat, so that rats scatter in all directions when a cat appears.

An alternative version of the story says that Cat and Rat got as far as crossing the river together on Ox's head, but Rat pushed Cat into the water (and Cat was washed away and drowned or didn't get back to the Heavenly Gate in time to get a ranking).

Effects of the 12 Chinese Zodiac Signs

The ranking story above is made up according to people's understanding of characteristics of the 12 animals. And when people talk about a person's zodiac sign, they might think about the zodiac sign's characteristics.

For example, when talking about Rats, people think of quick-witted, resourceful, and versatile people; and Oxes are decisive, honest, dependable, and hardworking.

Read more about the Chinese zodiac.