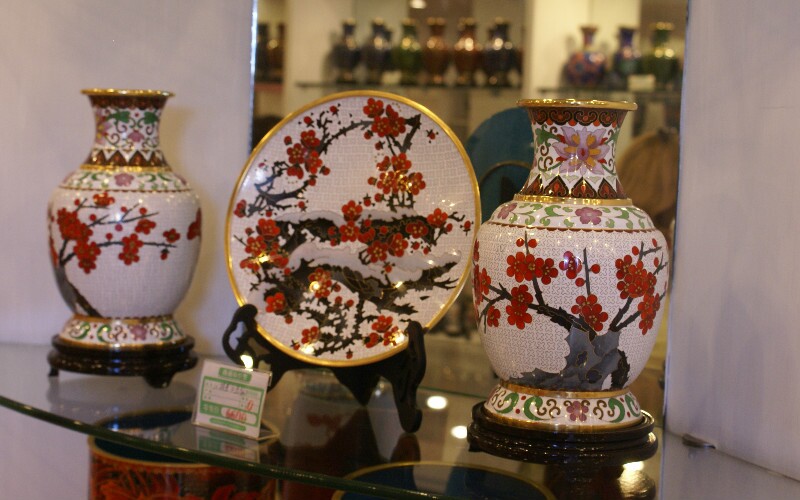 Cloisonné is an art technique that is mainly used to decorate metal objects or ceramics. It is thought that the technique originated in the West. Then Chinese craftsmen learned to create beautiful bronzes and porcelains in the Ming and Qing eras, and they are still made and highly valued today.

What Is Chinese Cloisonné?

Chinese cloisonné enamelware is made by embedding small pieces of material such as flecks of gold or powdered mineral in enamel. Enamel is a layer of glass melted onto a surface. Craftsmen may apply many thin layers of enamel with embedded material firing (heating) each layer to coat an object. If the process is done well, the result can be a strikingly colorful and even sparkling hard surface with translucent depth that looks unusual compared to simple painted ceramics or lacquer ware.

The English word cloisonné (cloi·son·né \ˌklȯi-zə-ˈnā) derives from the French word "cloison" that means partition. Originally, wires or strips of metal were used to partition a surface into compartments into which enamel was cast. But in the Ming style, the different colors of enamel were sometimes allowed to bleed into each other without the partitions.

In the Middle East, artisans applied powdered mineral materials, small gems such as garnet that are heat resistant, gold leaf or other inclusions to metal surfaces and then melted glass onto them them at high temperatures to produce a durable coating. Different mineral materials could produce different colored coatings. Early Arabic and Byzantine artisans made colored mosaics and decorated metal objects and other heat resistant objects.

Cloisonné of the Ming Dynasty Era

Enamelware craftsmen in the Ming Empire (1368-1644) made enamelware by firing powdered minerals into durable enamel. The earliest known Ming era example of cloisonné was produced sometime around the year 1430. But it isn't known when the craft was first practiced. Cao Zhao described cloisonné in his book, Ge Gu Yao Lun ("Essential Criteria of Antiquities"). He called it "Dashi" or "Muslim" ware.

During the reign of Emperor Jingtai (1449-1457), Chinese cloisonné reached a high level of beauty and craftsmanship. It was called "jingtailan" (or Jingtai blue) because the enamelware that was made during his reign was typically blue. Some cloisonné antique experts and collectors say that the cloisonné that was made during the middle of the Ming era, in the Jingtai period and afterwards, was the best ever made in the world.

Ming era innovation: Using white porcelain as the substrate material was a major innovation. It combined their skill with making the translucent, light, and strong white porcelain that had been highly prized abroad for many centuries with the Western technique of decorating with cloisonné artwork. Porcelain withstood the high heat firing needed to produce the layers of glass enamel. Beautiful white and blue porcelain pieces with fine cloisonné artwork were highly prized.

Cloisonné Made in Later Eras

Fine cloisonné wares were also fashioned in the Qing Empire (1664-1911). Collectors and experts generally say the quality was less than the products from the Ming era. Gold objects decorated with cloisonné artwork were highly valued by the Qing court.

Cloisonné decorated objects are still made in China. Now, chemical technology allows the artwork to be very colorful. Craftspeople typically decorate with a broad range of bright colors and not the typical blue of the Ming era. Bronze or copper vases and other decorative objects are produced by craftspeople in factories and crafts shops.

Tourism: Some tourists are interested in Chinese cloisonné, so some of the biggest factories invite tourists to come and watch the craftsmen.

There are several large factories around Beijing where cloisonné products are made that welcome tourists and tour groups:

If you want to shop for wholesale Chinese cloisonné at the best prices, than the Yiwu Commodities Trade Market in Yiwu might be the best place to go: