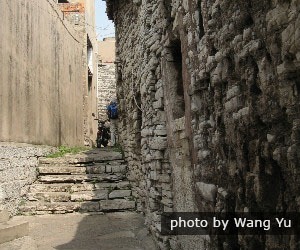 The Gaodang Buyi Village is a village built of stone like some other Buyi villages.

The Buyi (or Bouyei, Buyei, or Puyi) ethnic group numbers almost 3 million in China. They live among related ethnic groups in primarily Guizhou Province, but some live in adjacent areas of Yunnan and Guangxi. Traditional Buyi live in small and interesting mountain villages that are still somewhat primitive.

The Buyi, in quite a contrast with their neighbors the Miao who are known for making and donning silver accessories, are famous for their indigo died clothes. They wear little silver, and they prefer instead beautifully designed and dyed clothes. Some are also known for their rock and slate villages and bamboo pole dancing. They are also noted for their friendliness.

Tourists like to visit their villages to experience their culture, buy indigo dyed fabrics, try their food and see their architecture. Notable natural highlights such as large caves and waterfalls are near their village areas.

Where the Buyi Live in China

The Buyi people mainly live in Guizhou. The highest concentration them, and the most traditional population, live in southern Guizhou in villages in mountainous areas. There are several prefectures that are named after them that cover an extensive area. These include Qiannan Buyi and Miao Autonomous Prefecture (黔南布依族苗族自治州, qián nán bù yī zú miáo zú zì zhì), Qianxinan Buyei and Miao Autonomous Prefecture (黔西南布依族苗族自治州 Qiánxīnán Bùyīzú Miáozú Zìzhìzhōu), Zhenning Buyei and Miao Autonomous County (镇宁布依族苗族自治县, 鎮寧布依族苗族自治縣). Some live in adjacent areas of Yunnan and Guangxi also.

Many are blessed to live in beautiful natural areas that have scenic areas such as Huangguoshu that is one of the largest waterfalls in Asia. They like to build their villages on mountainsides and hillsides next to rivers and streams so that they can draw water for drinking and daily use and irrigate their rice paddies and other crops.

Many Buyi have moved to Guangdong and other provinces to live in the cities, work in factories or get an education. More modern Buyi live in the city of Anshun is in the midst of the ethnic areas of southern Guizhou.

The Bouyei are the native people of the Guizhou plains who were there 2,000 years ago. They were once the same people as the Zhuang, but after the Han Chinese took over Zhuang territory, especially from the Tang Dynasty era (618–907) onwards, the differences grew between them and the Zhuang who mostly live further south in Yunnan and Guangxi and other regions. Their languages are still quite similar however, and in some places, the languages are identical.

They retreated to the rugged and remote mountainside as did other ethnic groups in Guizhou. In 1797, the Bouyei experienced severe repression, and some portion of them migrated to Vietnam.

The Bouyei themselves consider themselves to be Zhuang. The Zhuang/Bouyei distinction seems to be somewhat arbitrary, and the government bases the distinction on geographical region mainly.

The Buyi consider sweet rice wine and two special, time consuming to make foods as essential for every festival and special occasion.

Rice pudding cakes or "sticky rice" is usually made by the women. Men start the process of making sticky rice by putting hot cooked rice in a trough or large and pounding it with mallets into a sluge. Then the women take the sticky sludge and make rice patties. Often, they'll put sugar and bean paste and other ingredients inside as fillings. Then they fry it in lard and might cover it with honey and sprinkle salt.

Broiled, smoked pork is made by the men. First they slaughter pigs, and then they traditionally cook the meat over an open fire. The smoking and cooking can go on for 15 days, and they add ingredients to the fire such as orange peels to give the meat a delicious flavor and appealing fragrances.

Sweet rice wine is usually made by the older people in each household. They they will make lots of it so that there is enough for the household and to share with others if they can. Their special way of making it is to pass the hot liquid through bamboo tubes. This makes the rice wine have a flavor and scent of bamboo and also adds several vitamins to the wine.

For example, a woman must never return to her parents’ home to give birth. If someone dies outside the house, the body must not be brought back into the house. When the first thunder is heard each year, it is forbidden for anyone to do any type of farm work for several days.

The Buyi are famed for their traditionally produced indigo-dyed clothes. The colors and designs are beautiful, and Chinese consider this as one of the three most famous dyed cloth technologies of ancient China. The girls start learning the wax printing technique when they are 12. There might be vivid patterns of various colors on the fabric.

The fabric is distinctive in that the cloth in dipped in indigo dye to make it indigo blue or jade green. The colors are appealing, and in the traditional technique, no artificial dyes are used. So the cloth is nontoxic.

The stone architecture is unusual but practical. The stone houses stay warm in winter and cool in summer. Buyi villages are located in areas where there are natural slate deposits. So they take advantage of this and roof their houses with slate. They may also make pavements of slate. They use other kinds of rock to make their village walls and arched gateways.

Some villages are called "stone villages" because the use of stone and slate is so extensively that they might even make tables and water vats and water urns from rock. Zhenshan and Gaodang are notable examples as described below.

For the Spring Festival, they invite a senior calligrapher to write Spring Festival couplets in red paper that they place on each side of doors and windows. The Han Chinese traditionally do this too. They also burn incense, and as many Han still do, they burn yellow paper money (not real Chinese money) as a sacrifice to their ancestors. They like to make rice wine for their festivals. The older people, usually the women, of each household will make lots of rice wine for themselves and to share. The women make what is called "sticky rice" or rice pudding.

To complement the sticky rice cakes, the men's job is to slaughter pigs and make broiled, smoked pork in the traditional way over an open fire. Another essential custom of the festival is for the women to wash their wax printed cloth.

The Tiaohuachang Festival is a special one to watch around Zhenshan Village and surrounding regions. It is a special pole dancing day on the 10th day of the first lunar month (late winter generally in the Western calendar). It is amazing to watch the young, highly skilled pole dancers dance among bamboo poles clapped together in a precise rhythm.

As they dance, they sing and play percussion instruments! If you've seen Indonesian pole dancing, then this is similar but more difficult. The Bouyei do it with more finesse and seem to have trained for years. Groups of them perform dance routines among the clapping poles, sing and play their instruments.

The Lusheng Festival is a festival they share with their neighbors the Miao and other ethnic groups.

This festival is great for tourists to watch as tens of thousands of Buyi gather together in a series of singing competitions. It usually happens in July.

The festival dates back to the Ming Dynasty (1368-1644). The legend is that there were two lovers, but a local ruler killed the man and kidnapped the girl against her will. The ruler forced her to marry her, but during the wedding, she set fire to the ruler's house and threw herself into the flames. 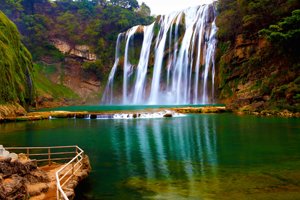 Huangguoshu waterfall is near the Buyi village of Huashishao and is one of the biggest in Asia.

Huangguoshu Waterfall: While visiting Buyi areas, you can see some remarkable and beautiful natural attractions such as one of the largest waterfalls in Asia, Huangguoshu Waterfall. It is 74 meters (243 feet) high and 81 (266 feet) wide. There are extensive parks around it that you can hike, explore and see the locals at work, and there are many other beautiful natural places. While there, you can see both Miao and Buyi ethnic villages and observe their differences.

The Huaxi Lake Scenic Area and the Tianhetan Scenic Areas are beautiful places you can hike. You can rent a boat and enjoy Huaxi Lake. It is near the Buyi/Miao village of Zhenshan village described below.

The Longgong Cave Scenic Area is a good place to hike, and you can visit Longgong Cave that is said to have the longest underground river in China. There is also a waterfall there. If you've been to many caves, these caves might impress you, but you could see them as part of a walking/touring trip in the area. The caves are near Huangguoshu Waterfall.

Several Buyi villages in the mountains and valleys have retained their traditional cultures and lifestyles. They are notable for being well preserved, having long histories, and for having retained much traditional culture. Among these are Shitou Zhai, Zhenshan and Gaodang Buyi Village.

The villages are interesting and located in beautiful areas. Many tourists find them a pleasure to visit them and be entertained by the locals in their homes. The Buyi like to build their villages on hillsides and mountainsides close to rivers and streams. In the past, and still so in the more traditional villages, it was the women's job to fetch the water every day in buckets that they carried on their shoulders and walk back to their houses and gardens. You can watch the people at their daily work.

About 75% of the villagers are Buyi and the rest are Miao. This is an unusual mix of distinct minority nationalities in one village. It is possible to dine with both Buyi and Miao families. China Highlights can help arrange your visit. The people in the region of Zhenshan are famous for their bamboo pole dancing like in Indonesia. You might be fortunate to watch a performance. They are also noted for making the best waxed indigo cloth fabrics, and you can buy fabrics and cloth.

While there, you could visit the Buyi Nationality Museum of Zhenshan.

Gaodang Buyi Village is an authentic village with a 600 year history. Gaodang is one of the best-preserved Buyi villages in China. The people still speak Buyi daily. The Buyi are excellent at playing various kinds of flutes such as the lusheng, and they are often happy to play for tourists. Tourists might hear great music and watch lots of dancing during festive gatherings.

You can go to the Buyi ethnic region by the Guiyang-Guangzhou High-Speed Railway.

Visiting the Buyi Villages with Us 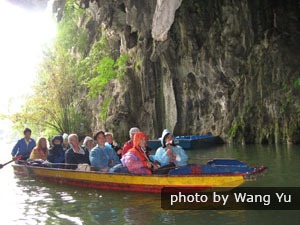 We can take you to these villages. In the Buyi areas, there are also many Miao villages and villages of other ethnic groups. You can watch Buyi women make their indigo fabrics and learn their techniques. You could also visit master Miao silver craftsmen and buy their superb handiwork.

Having a local guide and interpreter is important for helping you find the best places for you. We can take you to visit with families and arrange accommodation and transportation, and our expert guides can translate for you too.

Here are sample Guizhou itineraries including the Buyi:

Or add Guizhou and other destinations as below:

You can send us your ideas to modify the tours above. See other Guizhou tours. Inquiry is free, and receive a response within 24 hours. How to Plan a Guizhou Tour