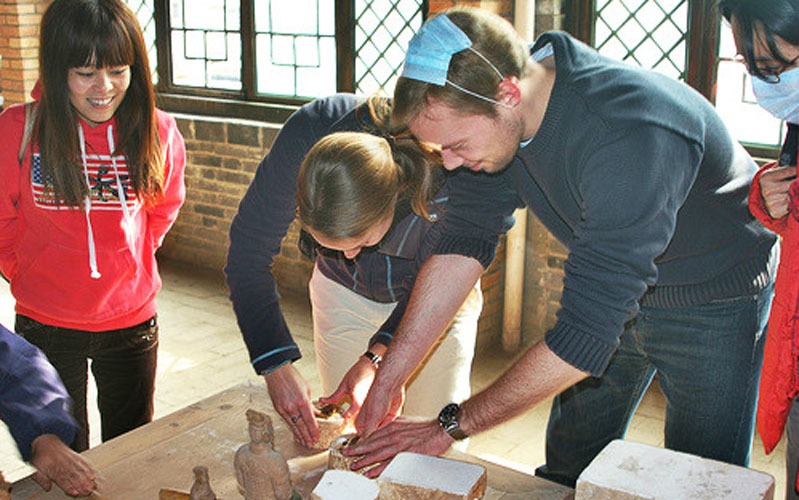 Your tour experience in Xi'an can be much better if you stay away from fake tourist destinations, cons and tourist scammers, and pickpockets.

Also you should avoid mistakes such as failing to know the must-see destinations, failing to bargain when buying items, failing to research and plan for travel and accommodation, culturally awkward behavior, and not knowing the best travel seasons.

Xi'an is full of fun, vibrancy, and historical attractions, many of which you shouldn't miss to get the best out of your Xi'an stay. The Terracotta Army hosts thousands of detailed life-size models of an ancient Chinese army, while the Xi'an City Wall is the largest ancient city wall in the world.

At the center of the city is the 17th-century, 36-meter-tall Bell Tower, where a huge bell, inscribed steles, and couplets hung on the columns, are exhibited.

Other must-see attractions include the Drum Tower and Big Wild Goose Pagoda.

If you are a nature lover, you could try Mount Hua for some hiking.

Fake attractions are not worth the visit, because they are simply made up of fake displays. Examples of these destinations include the “Hall of the World’s Eighth Wonder”, which features colorful warrior statues with double-lid eyes and red lips and displays fake models of ancient sculptures. It's the Terracotta Army's spoof double.

Another fake destination marketed to Xi'an tourists is the “Qin Tomb Underground Palace” that has an underground space of around 200 square meters. Its walls are lined with wax statues and the sand displays in the middle of the room include replicas of the terracotta warriors and a coffin. (The real First Qin Emperor's tomb hasn't been unearthed yet.)

While keeping your travel plans to yourselves can make for an individualized and exclusive experience, sharing the plan with a trusted travel agency, or someone familiar with the destinations, can help verify that you going to worthy destinations and not being misled.

Make sure to bargain when buying any item in Xi'an, especially if you are a visitor.

The Bazaar Area, which is located behind the Drum Tower in the Muslim Quarter, for instance, is the best place for tourists to buy souvenirs and folk arts such as block prints.

However, the price offered to foreigners is usually very high, sometimes more than 3 times the fairest price. For instance, you can bargain and purchase a Louis Vuitton wallet for about 30 yuan, from an offer price of 200 yuan or more. (You may be buying clothes, bags, watches etc. that have fake brand names though.)

The same happens in other places, such as Kangfu Road outside the east of the Xi'an City wall.

Although Xi'an is a multicultural city that attracts several million tourists per year, it is very conservative and it is advisable to be respectful when in public places. It is advisable to not wear revealing clothes especially when visiting sacred sites.

5. DON'T show too much affection in public.

Again, being a conservative society, Chinese frown upon showing affection in public, and even more in Muslim areas.

Choose to shake hands with strangers in public places instead of offering to hug them, since forward affections are seen as super embarrassing and awkward. That does not mean it is unacceptable for long term friends of the same sex to hug and walk down the streets holding arms. While, at the same time, same-sex couples are taboo in Xi'an.

That said, it is important for both female and male solo travelers to be assertive with excessive public affection towards them, and avoid individuals and groups showing any excessive desire and effort to help.

6. DON'T trust everyone or fall for scams.

Illegal tour guides could offer free lunch and shopping, but overcharge you later or steal from you along the way.

Make sure you check any antiques and curios in Xi'an's streets to avoid the fake ones. You should also watch out for pickpockets at the Bell Tower, Drum Tower, and Muslim Quarter areas.

7. DON'T be unprepared for emergencies.

While there is no cause for alarm when touring Xi'an, it is important to have local emergency numbers, copies of important documents, and hotel and tour company phone numbers in order to respond appropriately to emergencies such as scams and theft if they ever occur.

8. DON'T be unaware of the climate and local conditions.

Most tourists will find Xi'an uncomfortably hot in summer, and unpleasantly cold in winter, so the best times to travel the city are spring, from March to May, and fall, from September to November. See more on Xi'an Weather.

Xi’an is dusty and dry usually, and the air quality can be poor, particularly in winter, though it is driest when the weather is colder.

If you are planning to spend the night in Xi'an, know that most inexpensive guest houses will have squat toilets as do some attractions and public facilities.

Again, don’t fail to plan for a quality stay before you start off the journey to Xi'an, especially if you are a first timer or unfamiliar with the location. If you are a new visitor, it might be difficult to find the best and more cost-effective and comfortable options, especially without pre-planning.

Pre-planning helps you to avoid falling for aggressive hotel touts who meet you as you exit the Xi'an train station.

9. DON'T fail to plan for crowds and Chinese holidays.

They are certainly less suitable if you are looking for a quiet time alone or with family and kids. You should avoid going to crowded areas especially during specific dates when major holidays take place.

You could choose other less crowded locations such as the Taibai Mountain National Park where you can do hiking, or the Qin Shihuang Mausoleum and the Banpo Village remains for historic tours if you want some quiet time with family.

Foreign tourists often get scammed due to their lack of familiarity with Chinese currency. Xi'an is renowned for fake money scams so ensure you inspect every note as you take the change.

Check the security features on any (large denomination) notes you are given. Chairman Mao's hair and jacket should have a distinct texture and the Bank of China coin symbols should line up if held up to the light. For more on what to look out for see A Practical Guide to Chinese Currency.

Tour Xi'an without the problems with China Highlights

We are an experienced and caring China-based tour company. We are not only familiar with the tourist attractions in Xi'an, but also can help you overcome any challenges you might have touring China.