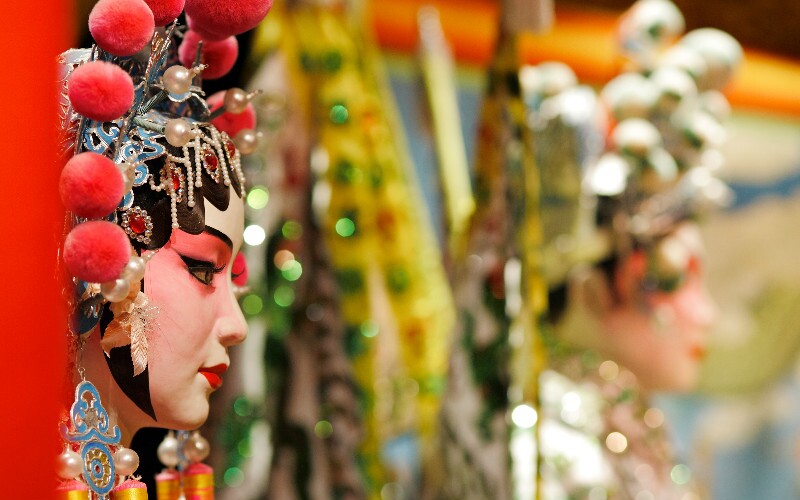 The antiquity and majesty of Chinese theater remains hidden from tourists' vista, a vista often cluttered by museums, hutongs, and a very Great Wall. Therefore to fully value the wealth of culture in Beijing, take a peek at the TOP THREE THEATERS the city has to offer.

While visiting Tian'anmen Square, The Forbidden City, and other nearby tourist must-sees, take a walking-distance stroll to the Red Theater. It's the new must-see for any and every theater or kung fu enthusiast.

Formerly known as the Chongwen Worker's Cultural Palace Theater, the Red Theater is known for its kung fu and martial arts performances. The fight choreography has become legend.

Its dazzling lighting, heart pounding sound and movie like effects pour off of the stage and into the laps of its audience members. 3D loses its novelty as the third wall is broken down and martial arts practitioners from all over China clash on the stage.

Recent renovations have put the Red Theater back on the map. Improved spacing, stage facilities and upgraded tech leave the Red Theater unrivaled in the world of theater; forget Shakespearean, this is Kung Fu Theater.

The Poly Theater, "the theater of protection and benefit" in Chinese, was designed by the British International Stage Designing Company Ltd. It has been graded Type A by the Chinese Ministry of Culture and well deserving; its quality is bar none.

Known more for its musical and dance pieces the Poly Theater releases both domestic and international dramas with multiethnic performers from every corner of the Earth. A mix of foreign and local audiences may watch African dance troupes one weekend, Hamlet the next, and a traditional Chinese drama a few weeks afterwards.

With literally hundreds of performances year round in English or Chinese with English subtitles, (yes, subtitles on stage) the Poly Theater beckons the theatrically inclined and even those who may not be.

Last but by no means least, The National Grand Theater, Beijing's largest, is encompassed by a manmade lake that more resembles a liquid halo when moonlit. The stunning glass and titanium exterior are molded in the curvaceous egg-shaped structure.

Designed by the French architect Paul Andreu, the theater seats over five thousand. Concert halls, opera houses, and dramatic theater stages find a home in the 212 meters long, 144 meters wide, and 46 meters high dome. It is the five star equivalent of the theater industry.

Guests are left speechless before even stepping inside. The theater dominates the landscape; the path leading to the massive entrance takes guests underneath the lake. Inside visitors are greeted by passionate, bi-lingual hosts and astounded by Peking Opera performances that won't be soon forgotten.

The Peking Opera's blend of makeup and mask, drama and history transports audiences to a time and place once forgotten.

Sets are designed in such detail that it mirrors that of Chinese architecture and costumes appear almost stripped from the skin of Qing Dynasty citizens. If the Great Wall represents the backbone of China then Peking Opera is its voice.

China offers far more than museums and exhibitions, with ancient art and volumes of history. The theater scene in China is alive, vibrant and history in the making.

Contact us to experience these theaters or customize a performance into one of our Beijing tours.