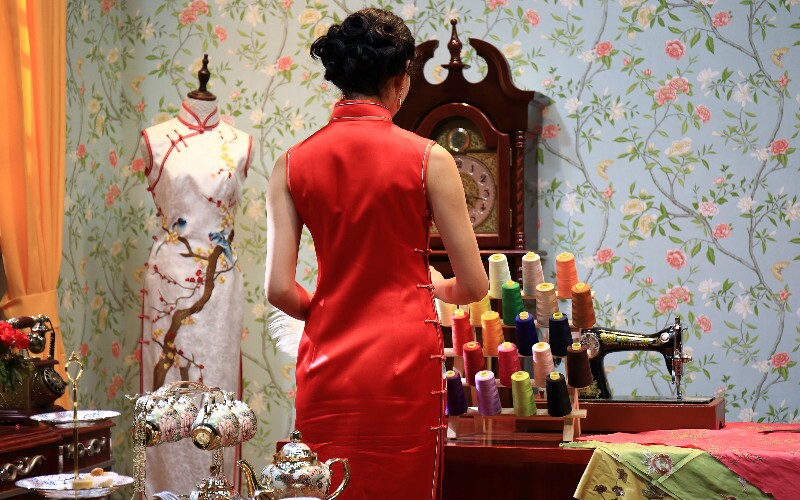 There are 56 ethic groups in China and every ethic group has its own special costume.

Built in 2000, the Beijing National Costume Museum is the first extensive collection of traditional ethnic attire. The institution’s large exhibition area holds over 10,000 pieces in seven display galleries. The museum’s exhibits are a “must see” for those interested in Chinese heritage and culture.

The museum has nearly 1,000 rare pictures recording the Yi, Tibetan and Qiang nationalities’ lives in the 1930s.

The Han Ethnic Costume Hall guides visitors through an explanation of modern Han costuming. Han clothing was the traditional Chinese national attire for thousands of years and is characterized by its elegant style. The form commonly consists of a Y shaped cross collar, a belt fastening, and lacks buttons.

Silver is important in many ethnic traditions as a source of good luck. It is used in embroidery as well as jewelry and hairpins.

China is home to 55 officially documented ethnic minorities. These individuals are of non-Han majority descent and comprise just over eight percent of the population. The Beijing National Costume Museum houses exquisitely preserved examples of the traditional garb of the Manchurians, Tibetans, Mongolians, and many other ethnic minorities.

Northern and southern costumes have obvious distinctions. The costume of northern minorities in China is a long dress. The fabric is mainly fur and brocade. However, in the south, coats and skirts are the main garments. Most are made from cotton and linen. The numerous types of garment and variety of decorations of China’s ethnic minorities are beyond description.

Embroidery and batik, a wax resist dyeing process, are commonly used by the native people of China to add individuality and ornamentation to their costuming. Ethnic minorities that lacked written histories also used these decorative processes to record their legends and customs.

The Miao nationality has over 100 branches, therefore it has more than 100 types of costumes. From Shidong Miao’s gorgeous clothing to the original south Dan Miao’s costumes, every type of costume has its own unique design. The most beautiful Miao clothing is in Guizhou. Embroidery, wax printing, textiles and silver are all extremely outstanding, which fully reflects the characteristics of the Miao nationality’s art of clothing.

The Beijing National Costume Museum is located at A2 Yinghua Road at the north entrance of Heping Street in the Chaoyang District. It is part of the Beijing Institue of Fashion Technology campus and is approximately 1000 ft (500 m) north of the Beijing University of Chinese Medicine.