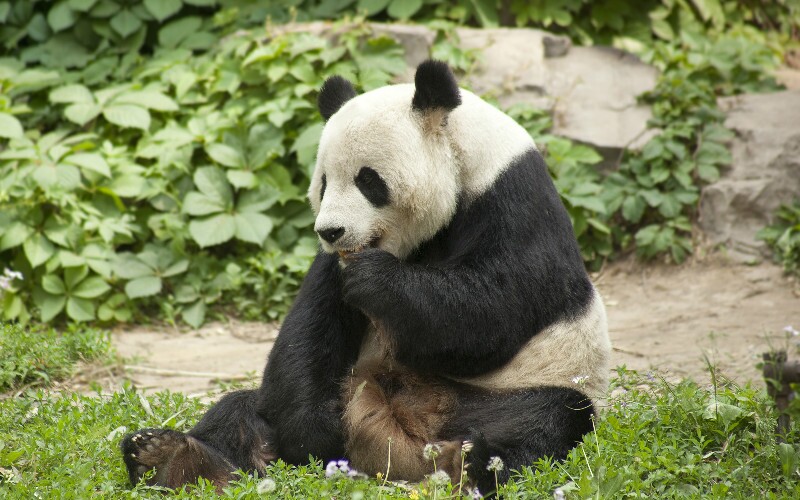 Beijing Zoo, just west of the second ring road, is now the biggest zoo in China with the largest animal number of species. It features pandas, elephants, gorillas, and dolphins and sharks in a big sea life center, all in a scenic Chinese garden setting.

Beijing Zoo is a natural garden with dense groves of trees, stretches of grassland, a small stream, lotus pools and small hills dotted with pavilions and halls. It was called Wansheng Garden in the Qing Dynasty (literally it means the Garden of 10,000 animals). After the Qing Dynasty was replaced by the Republic of China in 1912, this former royal garden became an experimental area for farming and animal husbandry. The zoo was not established until 6 years after the founding of the P. R. China in 1955, when the garden was officially opened to visitors as the City Zoo of Beijing.

The Beijing Ocean Hall measures 35,000 square meters, located in the northeast of the zoo. Seen from afar, the hall looks like a gigantic ocean trumpet shell. The shape of the architecture tells the visitors that it is a place associated with the sea. Going into this huge "trumpet shell" you find yourself really in close contact with the sea. The spacious hall is subdivided into several zones: the Hall of Tropical Rain Forest, the Hall of the Shark, the Ocean Theater and the Ocean Library and Reading Hall among others. Here the visitors can touch the aquarium in which the dynamic ocean bottom is visible. Through close proximity to the varied sea life, visitors can feel as if they are at the bottom of the vast ocean. In addition to seeing a replica of the natural conditions of the ocean life, visitors are also invited to enjoy the entertaining sea animal show. Those clever and cute sea animals, like the dolphins, make your trip hard to forget.

A lizard in Beijing Zoo

Beijing Zoo is more than a paradise for animals. A few gardens were built to grow the flowers that enjoy the most popularity in China, like the Chinese rose and peony (the peony is the national flower of China, signifying wealth and prosperity). While observing the lovely animals and the beautiful flowers, tourists can take a break and enjoy delicious food in the zoo. The restaurant Bin Feng Tang offers great imperial palace cuisines. There is another important attraction in the zoo: Chang Guan Manor, one of the previous temporary palaces for the Qing imperial family. However, it is currently not open for public viewing.

Our Yangtze Memories tour offers a visit to Beijing Zoo or you could request its addition to any one of our Beijing tours. We specialize in tailor-making tours to customer requirements.