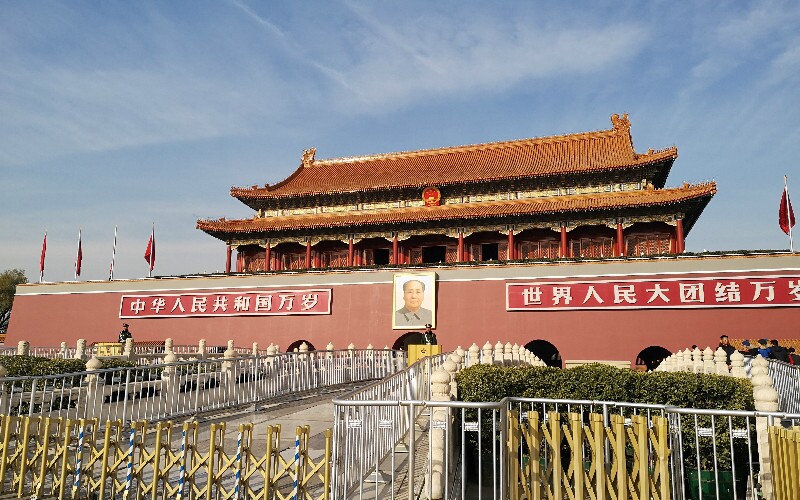 The impressive expanse of Tian'anmen Square has hosted momentous events like the declaration of the People's Republic of China by Chairman Mao in 1949, and is surrounded by a host of world class sights, from the Forbidden City to China's National Museum.

Tian'anmen Square, or less correctly Tiananmen Square, is named after the Tian'anmen gate to its north, separating it from the Forbidden City. The gate's literal name ‘Heaven Peace Gate' (天安门 Tiān'ānmén /tyen-an-mnn/) is usually translated "Gate of Heavenly Peace".

The Size of Tian'anmen Square

Tian'anmen Square is the largest famous world square, eclipsing Delhi's India Gate Complex and Warsaw's Parade Square, on its expansion in 1959. It fulfilled Chairman Mao's vision of being the largest square in the world for 17 years, until 1976, the year Mao died.

It's now the seventh largest city square in the world (and the fourth largest in China [2019]), at 440,000 square meters (109 acres) in size. It can hold about 1 million people for public celebrations or gatherings.

What Tian'anmen Square Is Famous For

Tian'anmen Square has great cultural significance as it has been the site of several important events in Chinese history.

It will be the biggest military parade in China in many years. All weapons on display are made in China. The parade will last around 80 minutes and 15000 people are involved in this huge event. In addition to this, there will be 160 aircraft, 580 sets of equipment and 59 squads (15 marching squads, 32 equipment squads, 12 air force squads) in the military parade.

Top Things to Do in Tiananmen Square

Tian'anmen Square is a huge space in front of the former imperial palace called the Forbidden City.

Tian'anmen, the Gate of Heavenly Peace, at the north of the square, is the main gate to the Forbidden City.

Zhengyangmen (meaning ‘Gate of the Zenith Sun' and now commonly known as Qianmen), to the south of the square, marks the southern entrance into the heart of old Beijing.

Standing at Tian'anmen and facing south, you can see the Great Hall of the People on the right, the National Museum of China on the left, and to the far south the national flag stage, the Monument to the People's Heroes, the Mausoleum of Mao Zedong, and Zhengyangmen in that sequence.

The latest Tian’anmen Square tourist information and layout infographic: click to enlage. Please contact us to use this copyrighted image.

Tian'anmen, initially built in 1417 during the Ming Dynasty (1368–1644) and located on the south–north central axis of Beijing, was the main gate of the royal palace in both the Ming and Qing dynasties. Ordinary people were not allowed to pass through this gate and enter the Forbidden City until 1911 when the last feudal kingdom collapsed.

Tian'anmen was initially called Chengtianmen (Chinese: 承天门, meaning 'Gate of Heavenly Succession'), which means to bear the edict and divine power of heaven itself, just as the emperor, who used this gate, was believed to.

In the eighth year of emperor Shunzhi's administration (1652), the gate was refurbished and called Tian'anmen ('the Gate of Heavenly Peace'). From then on nearly all important imperial celebrations and events involved passing through this gate, such as the enthronement of an emperor, imperial weddings, the rite of the emperor going to battle, and the worship of Heaven and Earth.

The magnificent main gate to the imperial palace has five openings. During the Ming and Qing dynasties (1368–1912):

Golden Water Bridge in front of the Rostrum

The 34.7-meter-high Tian'anmen Rostrum seems even more magnificent in the sunshine, with glittering yellow glazed tiles on the roof and deep red walls and pillars.

Before Tian'anmen are the Golden Water Bridge and the white Huabiao, a pair of ornamental columns made of white marble sculptured with dragon designs. They are also called "slander pillars", as in ancient times they carried the ordinary people's slander and suggestions for the emperor. There is also a pair of big stone lions on Tian'anmen Square.

2.The Great Hall of the People

This state building is used for legislative activities. It hosts full sessions conducted by the National People's Congress and is used for other political and diplomatic affairs.

3.The National Museum of China

This is now a merged museum, combining the National Museum of Chinese History and the Museum of the Chinese Revolution. Cultural relics, martials, and photographs illustrate the history and charming culture of China from 1,700,000 years ago to the present day.

4.The Monument to the People's Heroes

The Monument of People's Heroes

Erected in 1958, the largest granite monument in Chinese history is decorated with large relief sculptures about Chinese revolutionary history as well as calligraphy by Mao Zedong, which reads 'The People's Heroes are Immortal'.

5.The Mausoleum of Mao Zedong

Chairman Mao's body lies in a crystal coffin and is surrounded by flowers for people to visit and pay their respects. Security checks there are tight.

Ceremonies for raising and lowering the Chinese national flag are held at sunrise and sunset every day.

Every morning at sunrise, a flag-raising ceremony is conducted by uniformed troops. The entire ceremony lasts for less than 3 minutes. The flag is raised very slowly and is timed precisely at 2 minutes and 7 seconds to coincide with the sun, which takes the same time to rise above the horizon.

Tips for Watching the Flag Ceremonies

By Taxi: Show the following phrase to the driver: 请带我去天安门广场. It means ‘Please take me to Tian'anmen Square'. Taking a taxi is not recommended as it is hard to locate places to flag one down because parking is restricted at this national site.

By Sightseeing Bus Line 1 and 2

At present,there are 3 sightseeing buses introduced to tourist in Beijing, both sightseeing bus Line 1 and Line 2 go to Tian'anmen Square. Learn more about Beijing Sightseeing Buses.

Things to Be Aware Of

Tiananmen squareTian'anmen Square is a landmark of Beijing and full of history and culture. To travel with a professional guide is necessary and helpful if you want to learn about the history behind Tian'anmen Square. Please feel free to contact us for a tailor-made tour or if you need any assistance with your tour arrangements.