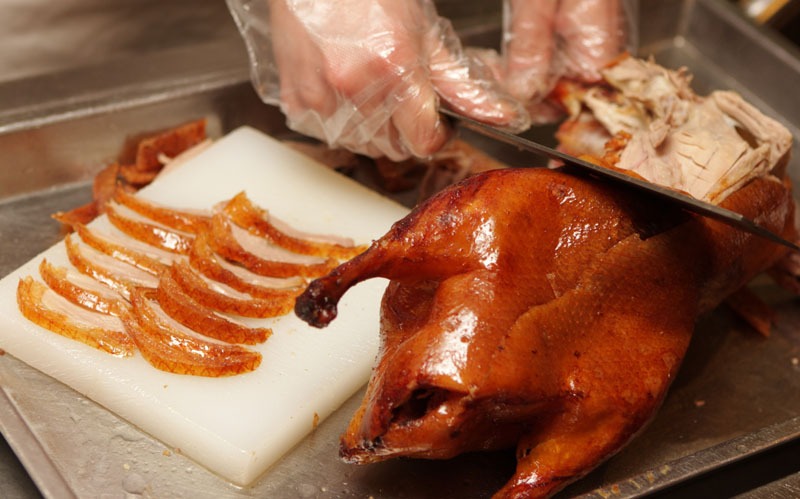 Beijing Duck: History, Recipe, and How to Eat It

Beijing duck is also known as Beijing roast duck. It is Beijing's best and most famous dish. With a legendary taste and dining experience, not only tourists but also high-ranking government leaders make it a point to eat Beijing duck in Beijing.

Why is Beijing Duck Famous?

The History of Beijing Duck

Duck is a traditional meat in China, and the dish was originally called shāo yāzi (燒鴨子, simply ‘roast duck’) in the Tang Dynasty (618–907). A fresh duck was grilled over a wood or charcoal fire. On this basis, the cooking method was continually improved by later generations.

Its cooking method was mentioned in the ‘Complete Recipes for Dishes and Beverages’ (飲膳正要) manual in 1330 by Hu Sihui (忽思慧), who was an inspector for the imperial kitchen. It was one of the main dishes on imperial court menus by then (the Yuan Dynasty).

In 1368, the Ming Dynasty was founded, and the capital was re-established in Nanjing. Imperial chefs cooked a duck by hanging it over a charcoal fire, making it crisp and fragrant, fatty but not greasy. The emperor liked it very much, so the dish was officially named ‘roast duck’ (烤鴨 kǎo yā) by the imperial court.

During the reign of the Yongle Emperor (1402–24), third emperor of the Ming Dynasty, he ordered the capital moved from Nanjing to Beijing. In this way, the roast duck recipe was also brought to Beijing. After that, the popularity of roast duck gradually spread to the local citizens. With its popularity in Beijing, this dish became commonly known as ‘Beijing roast duck’.

In 1416, the first known restaurant to specialize in roast duck opened in Beijing, called Bianyifang. There they roasted the duck in a closed oven having first heated the walls of the oven using sorghum stalks to give a crispy finish to the duck.

In 1864, another famous duck restaurant opened, called Quanjude. There they used a different method of cooking: hanging the duck to roast over flames in an open brick oven. Versions of these two restaurants still exist today, so we recommend you try at least one of them whilst you’re visiting Beijing.

By the mid-20th century, Beijing duck had become a national symbol for China, and the top choice dish served when receiving foreign leaders.

An authentic Beijing duck can take up to three days to prepare. It is an intensely complex process with many requirements.

The duck must be of the white Beijing variety and of superior quality, a "force-fed duck" that weighs about three kilograms.

Day one: Slaughter the duck. Pluck, eviscerate, and rinse thoroughly with water. The neck bone must be removed without breaking the skin, then the duck is hung to dry overnight.

Day two: Compressed air is injected into the duck between its skin and flesh to make the skin glossy and shiny. Then, once again, it is hung to dry with a glaze added to the skin.

Day three: The duck is roasted in a wood-fired brick oven for around 40 minutes. Through using a less-smoky, hardwood fuel like fruit tree branches (pear, peach, or date branches for instance), the duck has a fruity flavor and is red. It is roasted until the skin is crackly crisp and then served immediately.

How to Cook Beijing Duck at Home in a Simpler Way

It is difficult to make a real Beijing duck at home, because it not only requires that the skin be separated from the meat by forcing pumped air between the skin and the meat, but also that it is roasted over fruit tree wood to impart a special flavor and aroma.

As these two processes are not easily implement at home, here we introduce a simpler process for cooking Beijing duck:

1. Make a small hole at the bottom of the duck and take out the viscera. Then wash the duck.

2. Place the duck on a rack. Boil a pot of boiling water, and slowly poured the hot water over the duck. Making sure to get it on all sides. The skin immediately shrinks and tightens around the duck.

3. Mix soy sauce, wine, and salt in a bowl and massage it into the duck, and then let it sit for about an hour.

4. Dilute honey with water and apply it to the duck’s skin. (This is for the crispy skin effect.) You may want to do this more than once.

5. Leave the duck on a plate uncovered, put it in the refrigerator overnight (5-6 hours) to let the skin dry out.

6. Put the duck in an oven, set the temperature to 350°F (180°C) and roast for about 40 minutes. The color of the duck will become brown and red and shiny. Serve immediately!

How to Eat Beijing Duck

The manner of serving and eating Beijing duck is unique. The chef presents you the whole duck before taking it away for slicing, or at some restaurants slicing it in front of your table. Each slice is very thin, containing both meat and skin.

The best way to eat the duck is to take a pancake in one hand, then with your chopsticks pick up a slice of duck and coat it in the plum sauce. Spread the sauce onto the pancake using the duck, then add some more slices of duck and some cucumber and green onion. Finally, roll up the pancake and eat it with your hands — delicious!

Currently, with Beijing duck’s tremendous popularity, Beijing duck businesses have been expanding rapidly. In addition to Beijing’s local Beijing duck restaurants, a few famous restaurants have even established their branches in other countries as well as all over China.

Quanjude Roast Duck Restaurant (全聚德 Quánjùdé) is by far the most famous roast duck restaurant around the world, because it has long been chosen by the government for dinner functions with government leaders of other countries. In Beijing, there are about 10 branches, and some can seat more than 1,000 people. There are many other branches in China and internationally, such as in Toronto, Sydney, and Tokyo.

In addition to Quanjude Roast Duck Restaurant, there are also several other famous ones, please check out our Beijing duck restaurant recommendations for Beijing.

In Beijing, most restaurants do not have an English service and menu. If you would like to taste this delicious dishes, the Chinese sentences below may be helpful:

English: Excuse me, I would like to order Beijing duck.

Our Beijing tours, almost without exception, include a chance to eat roast duck. On a tour with us to China, we'll take you to the Beijing duck restaurant that our expert guides think would be best for you in the cities you travel to.

Our Private 4-Day Emperor's Tour of Beijing will take you on a journey back to imperial times. You’ll visit the key residences of the emperors, learning about life during the various dynasties, and feast on imperial dishes including roast duck.

Or contact us for a tailor-made Beijing duck experience in China.