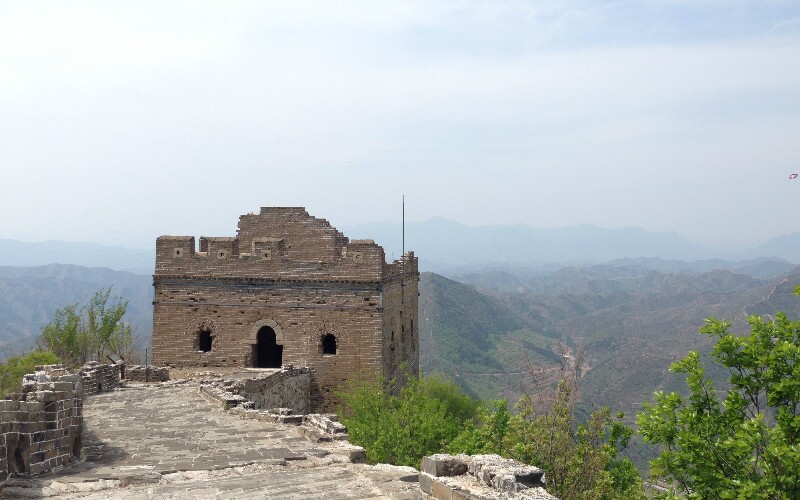 The Baimaguan ('White Horse Pass') Great Wall section once consisted of many guard towers and beacon towers, and formed part of the defenses along China's northern frontier. Today only ruins of the original structure and an arched gate remain.

Where Baima Pass Is

The Baima Pass section of the Great Wall is between the Mutianyu and Gubeikou sections.

When It Was Built

The Great Wall at Baimaguan was built on steep mountain cliffs, apart from the riverside fort. It was designed to intercept Mongol attacks down the valley from the north. It is a wild section of the Great Wall, unrepaired and difficult to access.

Little of the original structure remains standing, except for the fort's South Gate House and two sections of the wall.

In the mountains to the east is Perfect Tower (完美楼), a fairly-intact, sizable watchtower. However it's a 3-km hike east from the road at neighboring Lingnan (岭南) Village, ascending 300m to more than 800m above sea level. It's a lonely sight with its connecting wall long gone.

The traditional characters 白馬關堡 (simplified白马关堡, 'White Horse Pass Fort') are inscribed on a stone tablet above the arch. The tablet is somewhat different from those found at other forts, in that the four characters are arranged vertically in two lines, 'White Horse' (白馬 Baima) on the right and 'Pass Fort' (關堡 Guanbao) on the left.

Second Wall was the outer wall, with east and west parts standing. The east part is only about 50 meters (55 yards) long, stopped near a cliff; while the 200-meter-long (219-yard-long) west part extends along a 40–50 degree slope. The village of Baimaguan is roughly the shape of the old fort's Second Wall. First Wall, the inner wall, is the main body of the Baimaguan Great Wall fort.

According to local legend, many years ago, a fierce and strong white horse lived in Miyun county, terrorizing the local villagers.

One day, Yang Yanzhao (around 958–1014), a famous general of the Song Dynasty, saw the horse playing in the river. He jumped onto the horse's back and succeeded in taming it after a long struggle. From then on, General Yang rode the horse to fight his every battle.

At that time, the kingdom of Liao frequently invaded the Song's northern frontier. In order to stop the Liao intrusions, General Yang left the horse on the Great Wall. When invading Liao soldiers saw it, they beat a hasty retreat because they thought General Yang and his troops were stationed there.

A life-size stone statue of the white horse that gave its name to the pass stands by the gate.

The Best Time to Go

The best time to visit Baimaguan is in spring and autumn. It is hot in summer and cold with snow possible in winter.

There are only ruins remaining at Baimaguan. Though it is not developed for tourism, Baimaguan village does not pose any significant risks while hiking around to see the wall. If you venture out to see the wall on the surrounding hills, be prepared for some serious hiking.

Wear comfortable clothes and walking shoes. Layers of clothes that can be taken on and off allow for greater comfort and temperature control. Wear/bring sun protection in the summer.

By bus: You can take bus 980 at Dongzhimen to Miyun, and then a Fanzipai bus, getting off at Baimaguan.

By train: There are several trains running from Beijing East to Miyun daily. You'll then need to take a bus/taxi as above.

China Highlights' private transfer service is the most convenient way to get to Baimaguan. We use high-quality air-conditioned private transport with an experienced driver and an English-speaking tour guide to take the hassle out of getting to the wall.

Baimaguan's Great Wall section is in the mountains and deep forest in the north of Miyun County. There is no suitable accommodation nearby, so it is advised that you return to Miyun or preferably Beijing. The local restaurants and food there are also quite simple, so it is recommended that you take your own food.

If you want to visit the Baimaguan Great Wall section, China Highlights can offer you a hassle-free trip. Contact us and tell us your interests and requirements, and we will design a tour for you!