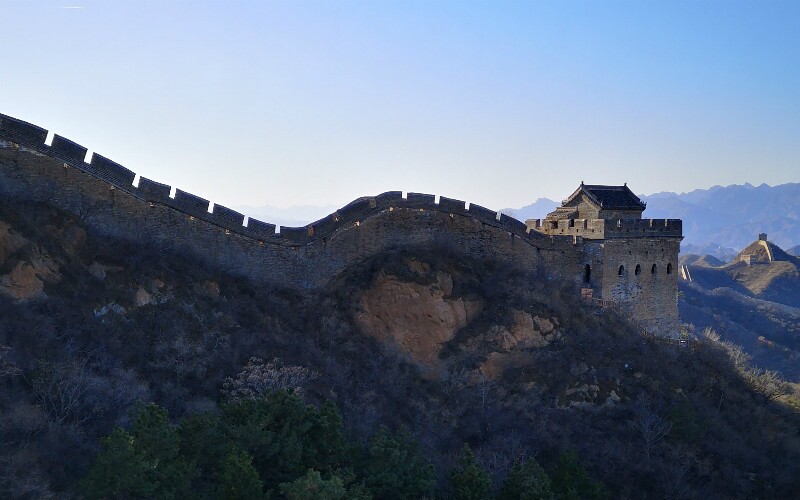 The Zijingguan Section of the Great Wall

Zijing Pass is one of the most important and oldest passes of the Great Wall, playing an important part in defending China against attacks from Mongolians.

Quick Facts About the Great Wall at Zijingguan

The most intact/restored Zijing Pass section of the Great Wall (about a kilometer of wall and five towers) is just east of Zijingguan Village, on the south bank of the Juma River.

When Was it Built?

The construction of Zijing Pass dates back to the Warring States Period (476–221 BC). It was rebuilt with rammed earth in the Han Dynasty (206 BC – 220 AD); after that, it was extended or repaired in different times.

Until the Hongwu years (1368–98) of the early Ming Dynasty, it was rebuilt based on slabs of stone, capped with bricks, and filled with limestone fragments.

Later on, during the Ming Dynasty, pass forts were either rebuilt or extended, watchtowers and flanking towers were added, and winding roads were dug, which gave Zijing Pass a comparatively complete defensive system.

The wall of Zijing Pass was 18 km long, including nine gates, four water gates, and 19 war platforms. The inner pass and outer pass were linked together, while the gates were designed one inside another.

Enemies who did not know the structure of Zijing Pass and burst into it, would have found themselves in a maze-like area and been wiped out by defenders.

The pass's Great Wall covered about three square kilometers. With a mountain at the center, its wall rose and fell along the ridges and stretched towards four directions, forming four irregular city circles, with smaller ones inside bigger ones.

The layout of the buildings along the mountains was a natural defensive system and of high military value because the city circles were connected to each other during a war and each of them could deal with attack independently.

Nowadays, there are still about 12,000 meters of the wall remaining along with three gates, three water gates, and two watchtowers.

The first gate appears when entering Zijing Pass from the south, and was built in Xishan Valley, Jinpox ia Village. From the gate, the wall stretches towards two bends until it reaches the peak. After the gate is the Eighteen Ancient Bends Path, at the top of which, between two mountains, is Nantian Gate (or South Heaven Gate).

Jinan Di Yi Guan ('the First Spectacular Pass in the Jinan area) has horizontal stone tablets embedded on the head casing of the arch of Nantian Gate. On the east side of the gate, there are two stone tablets.

One is for the Record of Rebuilding the Zijingguan Winding Path written by people from Jingpodao; the other one is for the seven-word poem by Han Guang, a general of the Ming Dynasty.

On the west slope outside the gate, there are also words written by the Kangxi emperor of the Qing Dynasty. The second gate appears after the Nantian Gate.

Next is the third gate, also called the South Gate, but it faces the west. The four Chinese characters of Zi Sai Jin Cheng are embedded on it.

The Zijing Pass continues after this gate. The north gate of Zijing Pass is built at the southern bank of Juma River valley, facing the east.

Zijing Pass is a well-known pass of the Great Wall which, together with Juyong Pass and Daoma Pass, are called the Three Inner Passes. In 1996, Zijing Pass was identified as the key cultural relic site under the state’s protection.

Known as the First Spectacular Pass in the Jinan area, Zijing Pass has always been a strategic military place throughout history for its important military position. According to statistics, several hundred small or big battles occurred there.

Zijing Pass is an important relic for studying the passes of the Great Wall as well as ancient military science. Nowadays, Zijing Pass has become an attractive place of interest.

Visitors to Zijing Pass can not only appreciate its spectacular scenery, but must surely have an interest in its legends.

Legend 1: At the top of the Eighteen Bends Road there is a flat mountainside. A human head has been carved on it with a crying face and a crooked black gauze cap.

It is said that at the end of the Ming Dynasty there was a government official who was known for repairing the Zijing Pass by extorting excessive taxes and levies as well as taking bribes. Later, he was beheaded and the civilians carved this picture on the mountainside to mock him.

Legend 2: On Xin iu Mountain (to the west of Zijing Pass) there is a rhino-shaped hill stone of about three meters high and seven meters long. On cold nights, people could hear the roar of the north wind from the stone rhino; in the daytime, farmers found it very difficult to walk past that hill stone. Therefore, ancient people usually worshiped the stone rhino as a magic rhino.

Traveling there is suitable at any time of the year although the best time is in autumn.

How to Get to the Zijing Pass

From Beijing: You can take the K601 train to Baijian Railway Station where you can reach Zijing Pass by taxi. The entire trip takes about four hours.

You can also take a taxi from Beijing to Zijing Pass. It takes about 2½ hours and costs approximately 400 yuan.

China Highlights' private transfer service is the most convenient way for you to get to Zijing Pass. We use high-quality, air-conditioned private transport with an experienced driver and an English-speaking tour guide to take the hassle out of getting to the wall.

Dress for hiking and dress for the weather. Choose comfortable footwear with a good grip and support for the feet. Wear/take sun protection in the summer and dress for sub-zero temperatures in the winter.

Take breathable waterproofs for protection from the rain and wind. Umbrellas may be used there. Take snacks and water if you want to walk across a long portion of the wall.

Visit the Zijingguan Section of the Great Wall with China Highlights

If you want to visit the Zijingguan section of the Great Wall, China Highlights can help you. Contact us with your interests and requirements, including anywhere else you would like to visit, and we will tailor-make your China tour.

See our most popular Great Wall tours below: