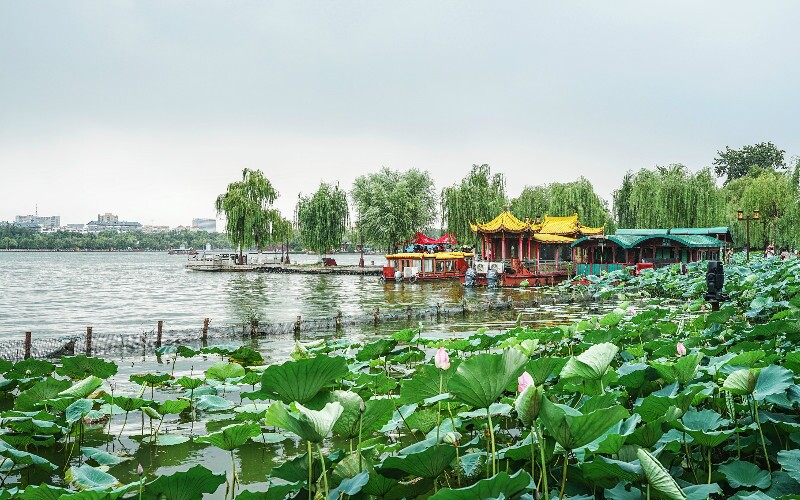 Daming Lake is located to the north of the old downtown area and in the center of the new downtown area, in the city of Jinan, which is the capital of Shandong Province. There are three very popular tourist sites in Jinan, one of them being Daming Lake, and the other two being Baotu Spring park and the Thousand Buddha Mountain. The entire Daming Lake tourist site covers 810,000 square meters, with the lake alone covering 460,000 square meters, being almost one third of the old city.

The scenery at Daming Lake is beautiful and graceful. There are about 800 willow trees growing along its periphery, and 40 mu (a Chinese unit of measurement, 1 mu is roughly 600 square meters) of lotus ponds inside the lake. To the south of the lotus ponds, there is a garden called "Xiayuan", which was built in the Qing Dynasty in the style of the gardens to the south of the Yangtze River. When you walk into the garden, the whole of Daming Lake is before your eyes.

Ancient Buildings by the Lake

There are many ancient buildings by the side of Daming Lake. In fact, there are so many that there is even an expression describing them, which is, "One terrace, three gardens, three towers, four ancestral halls, six isles, seven bridges and ten pavilions". All of the buildings are aesthetically pleasing.

Built on the largest isle within Daming Lake, Lixiating is a wooden structure with red pillars and gray tiles. Historically, Lixiating had been a place of assembly for men of letters. The famous and prestigious Tang poet, Du Fu (712-770), once went there to drink and write poems. Emperor Qianlong (1711-1799) of the Qing Dynasty wrote down the characters "历下亭" himself for its horizontal inscribed board. Unfortunately, the original pavilion was destroyed. The one we see now was rebuilt during the reign of Emperor Kangxi in the Qing Dynasty, and is now over 300 years old.

Beijige, a Taoist temple, is situated at the northern bank of Daming Lake. It was originally built in the Yuan Dynasty (1280 AD), and repaired in the Ming Dynasty. The temple is built on a seven meters high stone platform, and consists of a front hall, a rear hall, a bell and drum tower, and several east and west wing rooms.

Located at the north-east corner of Daming Lake, Huibolou was thus named because it was built over the northern water gate of Daming Lake. Since its completion, it had been a favorite place for people to go sightseeing, feasting and writing poems. Inscribed poems written by men of letters from different dynasties can be seen there. Huibolou was destroyed in wars before the liberation, and was rebuilt in 1982.

Situated on the west side of the northern bank of Daming Lake, Tiegongci was built in 1792 under the reign of Emperor Qianlong in the Qing Dynasty. Tiegongci is a courtyard that covers more than 6,000 square meters, and consists of winding corridors, three ancestral halls and one attic. In its courtyard, poplars and willows grow.

Xiaocanglang is a small garden by the side of Tiegongci, and was originally built in 1792 (in the Qing Dynasty). There are pavilions, winding corridors and lotus ponds within the garden. The winding corridors go along the perimeter of the lake; the water of the lake is channeled into the lotus ponds. Beside the lotus ponds is the octagonal Xiaocanglang Pavilion. Because it was built in the style of Canglangting in Suzhou, but on a smaller scale, it was named Xiaocanglang, meaning 'a smaller Canglangting'. Even though it has a 'ting' (which means 'pavilion') in its name, Canglangting is in fact a garden, and is actually the oldest preserved one in China.

Xiayuan was located on the south bank of Daming Lake. Originally part of Shandong Library, it was later reassigned to the Daming Lake Park. Its layout and design mimicked those of Tianyige, a very famous library in Ningbo, Zhejiang, with winding corridors on every side. Inside the garden, there are rockworks, pavilions and terraces.