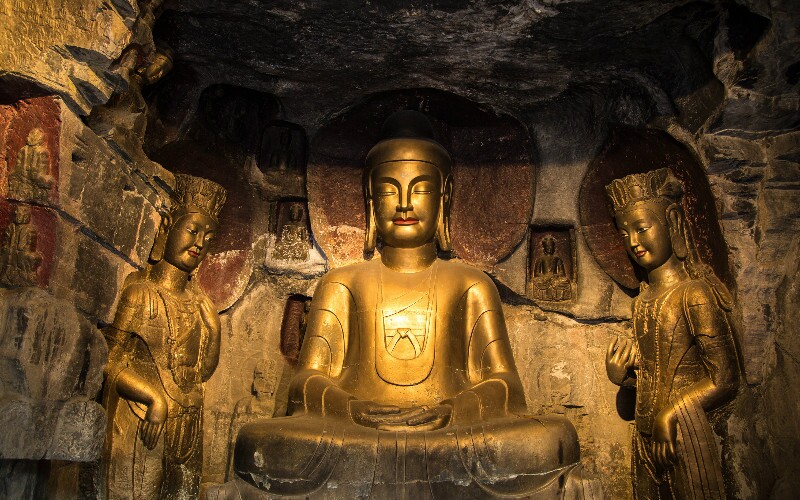 Those interested in the culture and history of China, especially its religious history, will not want to miss a stop at Thousand Buddha Mountain. There is much to enjoy of scenic natural beauty at this site as well, and its short distance from Jinan makes it easy to access.

Anyone traveling the Shandong area should not hesitate to put Thousand Buddha Mountain on their sight seeing list.

Many Names and Rich in History

Originally called Li Shan, the mountain became a holy site of the new faith from India, Buddhism, when a group of monks arrived there to chisel out thousands of Buddha figurines in the mountain side in the late sixth century.

After Thousand Buddha Temple (Qianfo Si 千佛寺 /chyen-for srr/) had been erected at its foot, the mountain eventually took its name from the temple. An ancient legend has wise king Yu Shun tilling the soil at the foot of the mountain, and inspires the additional name "Shun Tilling Mountain."

The preservation of the site and its tourist availability were solidified in 1959 when it became part of a small public park, which also includes Yellowstone Cliff and Jueshan Mountain.

Multiple temples were constructed, and thousands of Buddhas, large and small, were carved into the rock or positioned inside the temples or one of the five caves that lie at the mountain's foot. Thousand-Buddha Cliff on the north side of the hill just behind Xingguochan Temple is one of the most elaborate facades.

Xingguo Temple, Wenchang Temple, Shun Temple, Nine Spots Terrace, and the Stone Buddhist Head are other important features to be viewed. Pavilions, exquisite Chinese architecture with its distinctive curved roof-edges, and intricately carved stone walls all contribute to an impressive sight that will not quickly be forgotten.

The tourist will want to read up on Chinese history and on Buddhism before arriving to make the most out of the experience. Have your camera ready with plenty of memory or film and bring a small notebook to record your thoughts about what you see. This is an incredibly important religious site to many Chinese, and there are few holy sites so extensive in the world. Be ready for a little hiking and some in-depth thinking about China's culture and history.

Due to the monsoons in July and August, and cold weather from December through February, those months are not ideal for visiting Thousand-Buddha Mountain. September, October, and November are the best months to tour the mountain, which is open daily from 6 a.m. till 6 p.m.

The site is located about 2.5 km (1.5 mi) southeast from downtown Jinan, the capital of Shandong Province. Jinan is about 120 km (75 mi) inland on the Yellow River, and positioned approximately halfway between Beijing and Shanghai.

It is easy to catch a bus, train, or taxi in Jinan that will take you directly to Thousand-Buddha Mountain, since it is such a popular tourist destination. Those who desire a little exercise and a slow view of the city could easily walk such a short distance.

A visit to Thousand Buddha Mountain can be tailored into our Jinan tours or contact us to create your own unique China tour.

Almost adjacent to the site is a cemetery to honor soldiers who died in the 1911 Xinhai Revolution, the Shandong Provincial Museum, and the Jinan Botanical Garden.

Lingyan Temple is a picturesque little tower with each level a little smaller around than the last. Four Gate Pagoda is the oldest stone pavilion pagoda in China.

There are some of the earliest existing sections of the inter-state walls, precursors to the Great Wall, constructed by the then-independent state of Qi in 500 B.C. Other activities include cruising beautiful Daming Lake, visiting Baotu Spring Park, and much more.