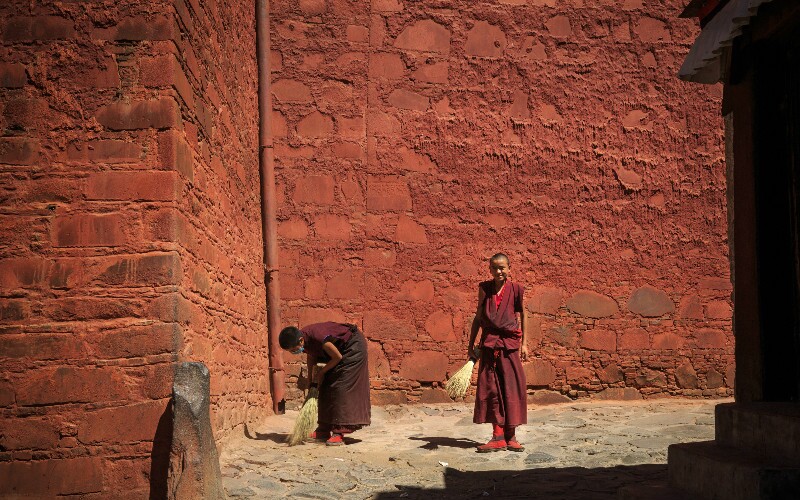 One of the biggest highlights of a Tibet tour is the monasteries. There are many monasteries in Tibet, and each has its own characteristics and things to be aware of. Read on to learn more about them.

Samye Monastery is about 2½ hours' drive south of Lhasa city. The monastery is built as a Mandala - a circular Buddhist figure representing the universe.

2. Jokhang Temple is seen as "the heart of the world".

Inside Jokhang Temple, there is a life-sized sitting Buddha statue of Sakyamuni, when he was 12 years old. It is the most sacred statue in the eyes of the Tibetan people, and they see Jokhang Temple as "the heart of the world". Some pilgrims spend years journeying to this temple.

3. Most monasteries are built on mountains.

Tibet's monasteries and palaces are usually built on mountains, so there will be many steps to climb if you visit them. Tibetan pilgrims count some mountains and lakes as sacred.

Mountainside temples are seen as closer to heaven, and they are easy to defend. Potala Palace and Tashilunpo Monastery are famous monasteries on the hillside.

Tibetan monasteries are not only for worshipping Buddha, but are also complex social institutions, functioning as schools, libraries, medical clinics, and so on. In Tibet's history, monasteries also functioned as local government buildings.

5. There are also nunneries in Tibet.

Usually, the monasteries people visit are only for monks. But there are also some "monasteries" for nuns in Tibet, like the largest "monastery" - Xiongse, one hour's drive south from Lhasa city. And the highest monastery, Rongbuk, actually houses both monks and nuns.

Ani Tsamkhung Nunnery is the only Buddhist nunnery in the old city of Lhasa (the area around Barkhor Street).

6. The Dalai Lama is the head of the Yellow Sect of Buddhist

Usually, the monasteries people visit are only for monks. But there are also some "monasteries" for nuns in Tibet, like the largest "monastery" - Xiongse, one hour's drive south from Lhasa city.

And the highest monastery, Rongbuk, actually houses both monks and nuns.

There are different monasteries for different Buddhist sects. The Dalai Lama is the head of only one of them - the Gelugpa Sect also called the Yellow Sect because its monks usually wear a yellow hat.

Most of the monasteries that are popular with Tibet tourists are Yellow Sect monasteries, e.g. the Potala Palace and Jokhang Temple.

7. Pilgrims give generously and journey laboriously to monasteries.

Most pilgrims are not rich. They bring yak butter and money, small amounts for each chapel, as offerings to the monastery.

They also bring things they treasure to offer at monasteries: flowers, oil, tea, candy, sugar, fruit, etc. It's kind of like the pilgrims provide for the monks and the monasteries.

Devout Tibetans prostrate themselves on the ground after every few steps in worship.

Some pilgrims who live thousands of miles from Lhasa walk for years to worship at Tibet's monasteries, frequently prostrating themselves along the way.

There are 8 holy stupas in the Potala Palace with bodies in. The stupas are decorated with gold, silver, pearls, agate, coral, diamond, and other treasures.

When you visit a Tibetan Buddhist monastery (the Potala Palace, Jokhang Temple, Sera Monastery, etc.), keep in mind to walk around it clockwise.

10. No photography is allowed in monasteries.

Usually, visitors are not allowed to take photos inside a monastery. But several monasteries, like Tashilhunpo and Palcho Monastery, photography is allowed at a cost.

If a monastery allows taking pictures, there is usually a hanging sign to tell you. So when you don't see a sign, don't take pictures inside a monastery.

In Sera monastery, videoing and photographing the monks debating with a camera is not allowed, but you can use your cell phone instead.

>> Find out more about Things Not to Do When Visiting Tibet

If you are interested in visiting Tibet, take a look at our most popular Tibet tours for inspiration:

We have more Tibet tours, or we could create your own individual journey. Also, we are confident that we can tailor-make you a tour to include a true Tibetan flavor, even if you can't get to Tibet for some reason.