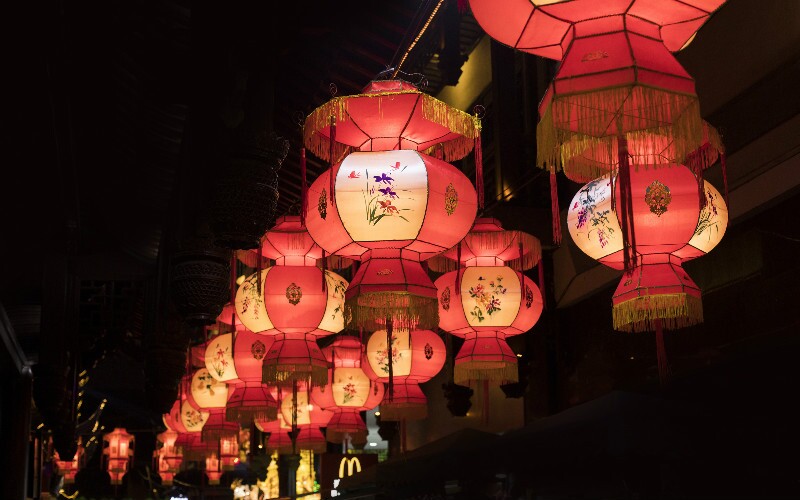 Chinese Lantern: What It Is and How to Make

In ancient China, Chinese lanterns were used to provide light and as aspects of worship. Today, they are used only for decoration and as modern forms of celebration and worship. Lanterns have become a symbol of national pride in China and are used to decorate homes and public places.

The most common Chinese lanterns are red, oval/round, and decorated with red or golden tassels. They also come in many different shapes, including cubes, cuboids, and cylinders.

The History of Chinese Lanterns

Chinse paper lanterns originated during the Eastern Han Dynasty (25–220), when they were used as lamp shades or covers in ancient China.

At first, paper lanterns were used to worship Buddha in temples. Mingdi (reign 57–75 AD), the Eastern Han emperor who is credited with Buddhism’s early spread in China, ordered the people of the imperial palace to light lanterns to worship Buddha on the 15th day of the first lunar month, which later became the Lantern Festival.

During the Tang Dynasty (618–907), people began to use paper lanterns more secularly to celebrate their peaceful life and the power of their country, which made lanterns more and more popular throughout China.

In ancient China, the art of making lanterns was a collection of crafts, including Chinese painting, paper-cutting, and needlework. The materials used for lantern frames include bamboo, wood, wheat straw, and metal. Paper and silk are traditionally the major materials. Popular illustrations on lanterns include landscapes, portraits of great people, dragon and phoenix designs, birds, and fish.

Dragon-and-phoenix patterns were the main elements on palace lanterns, which represented royal status or upper class society. Dragons were seen as the symbol of emperors in ancient China. They carried the meaning of wisdom, prosperity, great power, and strength. Lanterns decorated with dragons could only be used in royal family premises in ancient China.

Beautiful mountain or river illustrations on red lanterns expressed (wishes for) harmony and balance in nature, the elements, or families.

Riddle lanterns hanging on gates with riddles written on them were used to welcome guests, who liked to guess the answers to the riddles.

In Chinese culture, the colors of lanterns express different meanings. They are used for different occasions.

Red paper lanterns are symbols of wealth, fame, and prosperity. Red lanterns are used to celebrate occasions of joy and harmony, such as weddings, opening a business, family reunions, as well as the celebration of some festivals.

Yellow lanterns were mostly used in palaces in imperial times in China. Yellow was the emperors’ color in ancient China, so they were not permitted for use by the general public. It is now said that yellow lanterns can bring good luck to young students in school.

In Chinese culture, white is related to death or funerals. So, white bamboo lanterns were often used at funerals in China.

When Do Chinese People Use Lanterns?

Although there is no longer a practical need for Chinese lanterns nowadays for lighting, they are still made, used, and enjoyed by the Chinese people during festivals or important events. Streets, both in big cities and small towns, are decorated with red lanterns during Chinese New Year, Mid-Autumn Festival, and the Lantern Festival.

The Lantern Festival is one of the best days to view Chinese lanterns. The custom of viewing lantern displays on the evening of the Lantern Festival has a history of almost 2,000 years, since the Han Dynasty. It was a great event traditionally.

Guessing lantern riddles is one of the most interesting activities of the Lantern Festival. People gather under the hanging lanterns to compete to be the one who figures out the most lantern riddle answers.

How to Make a Chinese Paper Lantern Step-by-Step

Want to make a Chinese paper lantern to decorate your house? Here are simple instructions for making a paper lantern with a sheets of red and yellow paper.

Materials needed: A4 sheets of red and yellow (or gold) paper (1 of each), a pencil and a ruler, scissors, and glue

Fold the red paper in half, then use the paper and the ruler to draw some lines perpendicular to the folded side about 20 mm (3/4") apart, leaving about 20 mm at the top. After that, use the scissors to cut along the lines.

Roll the yellow paper lengthwise to form a tube, which is the center of the lantern. Then use some glue to fix the tube.

Glue the other end of the red paper to the yellow tube, making the red paper shorter than the tube, so that the strips cut with the scissors spread out.

Cut off the excess part of the yellow tube at the bottom or you can also leave it as a decorative part of the lantern.

Make the handle of the lantern using the excess part of the yellow paper. And fix it on both sides of the lantern at the top. Now you have made a simple and beautiful Chinese paper lantern.

Catch A Glimpse Of Chinese Lanterns

Dying to see Chinese lanterns up close? Let China Highlights plan your tour of China's greatest sights and come see the wonder for yourself with our festival tours.

We offer structured tours through the highlights of Chinese culture and history. Plan your own custom tour during the festival of your choice for beautiful photo-ops and breathtaking views of Chinese lanterns.