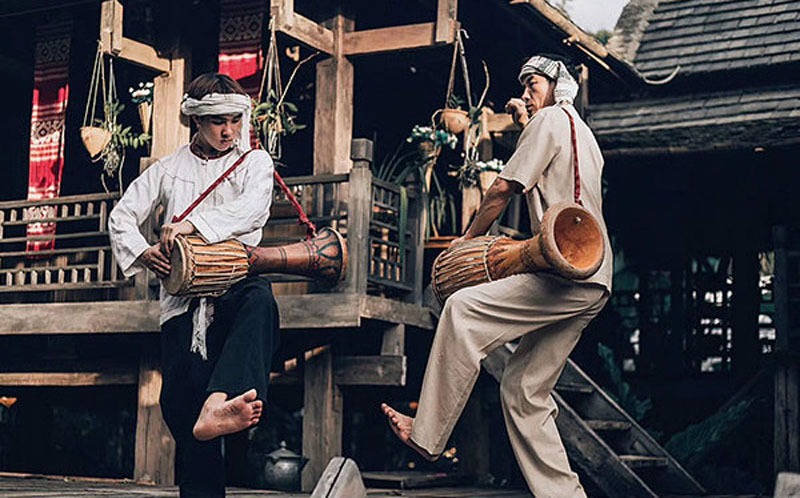 The Dai (Tai) Minority of China

The Dai people of China mostly live along the border of Burma and Laos in Yunnan Province. They are the wealthiest of the ethnic minorities of Yunnan. Unlike other ethnic groups who must work on hillsides or in high altitude areas, the Dai people live in the rich lowland agricultural areas along the major rivers such as the Mekong River.

Their culture is much like Thai culture, and they are closely related to Thai. Along with lowland rice agriculture, the Dai grow rubber trees and specialty teas, especially the expensive Pu'er variety.

Tourists traveling to the tropical valley area of Xishuangbanna will be able to enjoy their spicy and delicious Dai tropical cuisine, see their festivals such as the Water Splashing Festival, and see their architecture as they enjoy Xishuangbanna's rain forest and agricultural abundance.

Where the Dai Live in China

The homelands of the Dai in China are in Yunnan, mainly around Xishuangbanna and Dehong.

The Dai or Tai are among the 55 Chinese ethnic minorities classified by the Chinese government.

The approximately 1.5 million Dai people in China live in Yunnan Province. Their main homeland area lies along the borders of Burma and Laos. On the other side of these borders live another approximately 7 million Dai, and there is frequent crossing back and forth. About 200,000 Dai live in Thailand.

About 400,000 Dai live in the city of Dehong and in Dehong Dai and Jingpo Prefecture where they are facing the pressures of urbanization as the city grows and their traditional farmlands are lost.

Another 400,000 or so Dai live in the Xishuangbanna area adjacent to Laos. It is a tropical lowland along the Mekong River and a popular tourist area. About 13 other ethnic groups live in Xishuangbanna.

In the Central part of Yunnan, about 50,000 Flower Waisted Dai live in Xinping Yi and Dai Autonomous County. They are called that because their women traditionally wear colorful clothing around their waists. Their lifestyle is different than that of lowland Dai.

It is thought that the ancestors of the Dai were once living in the Yangtze River basin far to the north. But as the Qin Empire (221–206 BC) and then the Han Empire (206 BC– 20 AD) took control of the basin and the Han people and their control of the area increased, they moved south. Some settled north of Yunnan in Guangxi Province and surrounding areas and became the Zhuang people. Others moved further south into Yunnan and became the Dai.

Emperor Wu Di of the Western Han Dynasty established a large prefecture in his attempt to govern the Dai in Yunnan, Guizhou and Sichuan provinces. The climate was excellent for agriculture, and the Dai developed new agricultural techniques suited for the region such as using oxen for tilling.

About a thousand years ago, further wars and invasions drove part of Yunnan's ancient Dai people further south into Thailand and Laos. These became the modern Thai and Laotians.

With their control of the lowland areas and the Mekong River trade, the Dai have historically been wealthier and politically more powerful than the other ethnic groups. The expensive Pu'er tea is one of their cash crops, as are some tropical fruits and rubber. They are famed for their abundant rice harvests of both white and the special purple rice that is grown by the Flower Waisted Dai.

Their food is spicy and sour and is much like Thai cuisine. The Dai prefer to eat rice daily, and they add many kinds of meat to their meals including river fish. Like the Thai, they love pickled vegetables and bamboo shoots.

They also like to add tropical wild herbs, exotic fruit and algae from the river. These exotic dishes can be a special treat for tourists for the new taste experiences they can enjoy.

Bamboo cane rice: A special treat is bamboo rice that is made by putting rice in a bamboo cane, adding water, soaking it for a while, and then cooking the bamboo. The resulting soft, delicate rice has a delicious bamboo aroma and flavor.

Large insects: They like to eat various kinds of large tropical insects for meals and snacks. The bugs are eaten deep-fried, roasted, or grilled with spices.

Drinks: Homemade, partially-fermented wines are one of their favorite traditional drinks. Another is Pu'er tea (普洱茶 pu'er chá). It is one of China's potent famed medicinal drinks.

The historical Dai costume is made up of a short, narrow-sleeved dress worn with a sarong. Modern clothing comes in a wider range of styles, but there are some commonalities.

Most women's underclothes are light colors such as light blue, spring green, pink or white. Many women wear a short-waisted shirt that exposes a portion of the lower back over these garments. This shirt usually has a jewel-style collar. These are worn with a calf to floor-length narrow skirt and a bun hairstyle secured with a comb.

Male Dai clothing has some similarities to female dresses such as the tight-sleeved, collarless jackets they prefer. These are worn with long, loose trousers. Headgear includes white, black and blue turbans. In cold weather, a blanket may be wrapped around the shoulders.

Dai culture includes many songs and dances, the most popular of which include the Drum Dance, Peacock Dance and Lion Dance. Most dances are accompanied by the elephant foot drum that is so named for its shape.

These drums are relatively long and made of hollowed logs covered with sheep or python skin and then painted bright colors and decorated with peacock feathers. The drums include a ribbon or strap that allow dancers to sling the instruments over their shoulders and play as they dance.

The famous Peacock Dance is notable for the undulating arm and torso motions and several steps that imitate peacock behavior. These include step walking, looking for water, peering about, bathing, drying the wings, and spreading the tail feathers, as well as flying from the nest. These bird motions are usually interspersed with free-form dance movements decided upon by the performer.

Traditional Dai houses are built to protect people from flooding.

The Dai of different Dai regions live in different structures. The Flower Waist Dai of central Yunnan build big adobe houses with flat roofs. Their structures are not raised.

Most Dai however live in lowland rainforest areas prone to flooding. These Dai typically erect square or rectangular houses of wood and bamboo that are raised up on wood and/or bamboo pillars, and their houses have two or three stories. The second story is generally the family living space, and the lower is for sheltering livestock and storing food.

The family living area usually has a dining room, a work room, an area for receiving guests, bedrooms and a laundry balcony. The household water tank is kept on this balcony.

They attempt to elevate their raised structures high enough to protect the family living area from flooding if possible. By living in these raised houses, they also avoid the bugs and animals.

Festivals of the Dai Ethnic People

The festivals of the Dai people are generally related to their religion. The main festivals include the Door Closing Festival, the Door Opening Festival and the Water Splashing Festival.

The Dai calendar starts with the Water Splashing Festival that falls during Chinese New Year (between early January and the end of February depending on the lunar calendar). This is the first Buddhist festival of the year and the most important Dai festival. The event lasts for three days.

The first two days of the festival are marked by dragon-boat competitions designed as a method of saying goodbye to the old year.

The third day, early in the morning, people take a ceremonial bath, change into new clothes, and go to the temple.

This is followed by a playful splashing of water, basically a water fight, especially for the young. This can involve anyone who might be passing by. The water is thought to bring good luck for the new year to anyone who is splashed.

Visiting the Dai with Us

In Xishuangbanna, along with the Dai, there are about 13 ethnic groups to see, an elephant park, Dai architecture, ethnic restaurants, and tropical rainforest and gardens to enjoy. It is one of China's few tropical areas. We can help arrange your visit to native families.

There is an airport, but, as yet, there are no trains to this region. To get around, it is helpful to have a private driver and a guide with you. This is especially true if you want to visit the ethnic areas in the highlands and rainforest. We can provide private transport and driver for you to get there quickly and travel around to the various villages to meet the people.

Private drivers and vehicles are very convenient in Dai areas.

Here are sample itineraries for the ethnic areas of southern China. If you want a trip specifically to see the ethnic Dai or to go to other places directly, we can provide such a tour for you also.

According to where you want to go and what you want to do in Dai regions, we can modify these tours for you and design a trip you'll enjoy. Send us your ideas. You'll receive a response within 24 hours. Inquiries are free.