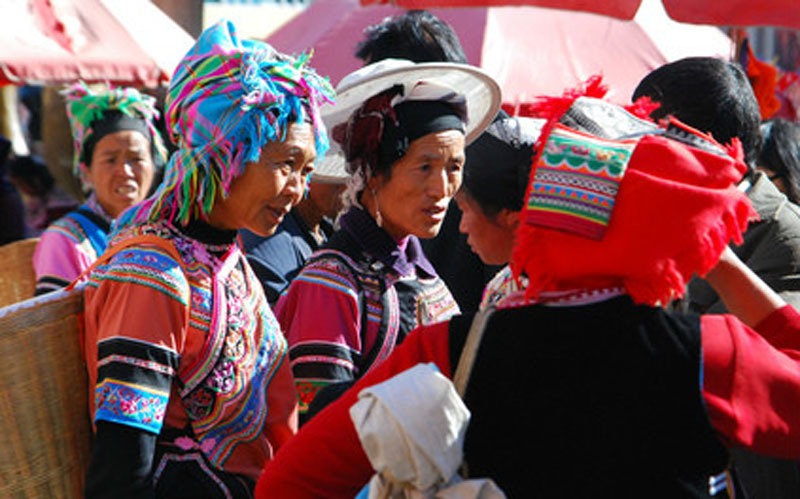 Hani Minority - Among the Most Traditional in China

The Hani people on the border of Vietnam in southern Yunnan may be the most traditional and least assimilated of the ethnic minorities in southern China. There are about 2 million in China.

They make remarkable terraced rice paddies and are known for their tea culture. They grow excellent teas including the often costly but delicious and healthful variety called Pu'er.

Tourists like to visit their towns and tribal villages, eat their cuisine, buy and drink their teas, and experience their lifestyles.

Where the Hani Live in China

About 90% of the 2,000,000 Hani (or Hani) in China live in Yunnan Province. They are concentrated on the southwestern corner of Yunnan along the Vietnam border in counties along the lower reaches of the Honghe River.

Yuanyang County in Honghe Prefecture Is Their Stronghold 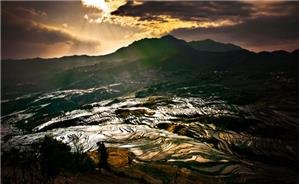 A beautiful sunrise over some Yuanyang terraced fields during the spring sowing season.

Yuanyang County in southwestern Yunnan maybe be considered as one the Hani stronghold regions. Their remoteness on the edge of China amid rugged valleys protects them so that they are still somewhat isolated and traditional. Tourists and photographers who make their way there love to visit and stay on the mountainsides covered with rippling terraced fields.

The people are still traditional, wear native clothes, and buy and sell in marketplaces with other ethnic peoples who are also clothed in their own quite different ethnic fashions.

In some of the markets, it is interesting to see the mix of various minorities, mainly Hani, Yi, and Miao, but also Yao, Dai, Zhuang, and Han who live in different valleys and at different elevations. It is an amazing mix of cultures and races all in one fairly pristine area.

The Hani and their ethnically close relatives the Yi, live mainly at the elevation of 1300 to 1600 meters. They were the ones who built the huge terraced fields in the area. Hani and Yi terraced fields are among the Most Beautiful Terraces in China and on par with the Yao and Zhuang Longsheng Rice Terraces near Guilin. 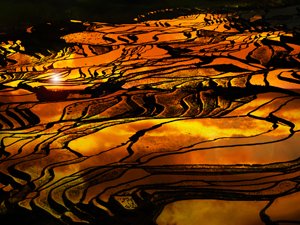 The Hani have an interesting history. It is believed that they, like the related Yi, were part of the Qiang people in West China. Like the Yi, they left Tibet and moved down to the lower elevations of Yunnan and surrounding regions.

The Yi created a large empire called the Nanzhao Empire in the Yunnan region during the Tang Dynasty era (618–907) era. They grew rich from the Tea Horse Road trade between the Tibetans, the Tang, and the southern countries because the southern Yunnan is an excellent tea growing region famous for brick tea and highly prized Pu'er tea.

The Hani oral traditions state that 50 generations ago, or 1,150 years ago, around the time of the fall of the Nanzhao Empire and the rise of the Kingdom of Dali (937–1253), their ancestors split away from the Yi to form a separate tribe. One of their oral traditions is the recital of the names of their Hani ancestors from the first Hani family down to oneself, so this tradition about their historical origins may be accurate.

The Hani are related with the Naxi and Bai who are both also descended from the people of the Nanzhao/Kingdom of Dali. The more warlike Yi were considered the founders and upper class. It isn't clear how the Hani fit in that society, but in the Kingdom of Dali, the ancestors of the Bai replaced the Yi as the rulers.

Their staple foods are rice and corn. Sour and spicy are their favorite tastes. They may pick wild vegetables to make soup, and they use herbs as condiments.

Both Hani men and women generally smoke. Heated wine and teas are their favorite drinks. Chewing areca is also popular among the Hani People.

Pu'er tea: It is believed that the Hani were among the first people in Yunnan to produce a costly, delicious kind of "black tea" or post-fermented tea called Pu'er (普洱茶 pu'er chá). It is one of China's potent medicinal teas, quite expensive, and is good for health. Many Hami villages specialize in growing mainly Pu'er tea, and they love drinking Pu'er. It is a cash crop for them as well as a welcome relaxation in the evening. It is one of China's most famed medicinal drinks. 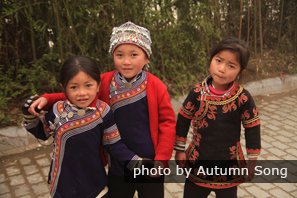 Children in native dress in a Hani village

Black and dark blue fabrics are their traditional clothing. The men dress in short jackets, often black, and in long wide pants. They also wear white or black turbans.

For the farmers and residents in the highlands, heavy and durable clothes that keep them warm and comfortable in their dirty environment have obvious advantages. Hani are generally poor, so their clothes are not very elegant or beautiful, and their dyeing techniques are less sophisticated than that of other ethnic groups. They sew embroidery and silver ornaments on their clothes.

The women like to adorn themselves with jewelry and adornments, but they wear nowhere nearly as much jewelry as do the Miao and other more northern ethnic women. In general, the people like to dress modestly and not ostentatiously. Modesty is a big value among Hani.

Traditionally, the Hani did not wear shoes and socks. They wore special wooden shoes that provided good traction in mud. These were used for walking in muddy rice paddies.

Hani are a hospitable and friendly people. When visiting an ordinary Hani family, you will be served a homemade Hani cigarette pipe. If you are not a smoker, you may decline in a courteous manner.

The 'Recognizing the Uncle' Tradition

In Hani belief, one's uncle (the brothers of mother) is the most senior. They feel that if a baby does not know his or her uncle, he or she can not grow well. Therefore, an important custom is called "recognizing the uncle." On the day a baby should recognize his uncle, both the mother and young baby must get up in the early morning. The mother washes the baby's face and dresses him or her neatly. The mother should also paint a black mark on the baby's forehead and tie some garlic to the baby's head cover to ward off the evils.

When everything is ready, the mother will carry the baby on her back and set off to the uncle's home. She'll carry food with her: fried stirred yellow beans, steamed chicken eggs, and sticky rice cakes. The mother also carries a white umbrella and a sickle. On the way, whoever they meet, regardless of sex, age, or ethnic group, the mother will offer a gift of food with a big smile. Hani villages are normally located around lush forests and jungle so that they have abundant water for their fertile terraced fields or valley floor flieds. They generally build houses on pillars.

Common Hani buildings are the straw house and the mushroom house. Nowadays, the also build modern reinforced concrete structures. Among these, the mushroom house is the most representative of Hani architecture.

The mushroom-shaped house consists of bamboo and wood scaffolding and a straw roof (the roof has four sloping sides). Supported on wooden pillars, the bottom ground floor of the house is for keeping livestock and furniture. People live on the first floor. It normally has three rooms. A square shaped fireplace in the middle room has a fire that is kept constantly burning.

The second floor is covered with fireproof earth and is used as a warehouse. The earth roof insulates the house so that it is warm in winter and cool in summer. In Hani the calendar, October is the beginning of a year. The five to six-day period of celebration is about worshiping gods and ancestors. A rooster is killed and cooked outside each house. Each family member except girls who are about to get married should eat one piece of the chicken.

Afterwards, three rice balls and some cooked meat are given to the oldest people in the clan. During the celebration, a grand Jiexin Banquet is a long table is set up in the middle of the village street. On it is laid delicious dishes from many households so the people can show off their their cooking skills and enjoy the food.

A unique convention is that the women who were married in the past year should gather in the fields outside of the village to talk about their marriage life. Men are not allowed to listen to what they say.

The June New Year: It is celebrated in June, but the precise date is determined by the shaman. Roosters, goats and bulls are sacrificed.

Visiting the Hani with Us 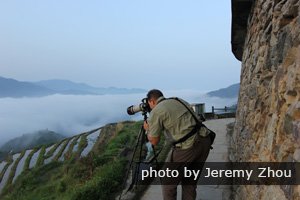 Bring a camera to Hani lands

Interesting places to go to visit Hani include Xishuangbanna where they produce some of the best tea in China and Yuanyang County.

Yuanyang County is noted for extensive rice terraces. You could visit the old Hani town of Xinjie 新街镇 in the center of the county and Qingkou 箐口. Both are amid picturesque terraced fields.

There are many other Hani villages in the region as well as villages of Dai and Zhuang who live below 700 meters and the Miao and Yao who live higher at the 1600 meter level and above. It is an amazing area to walk around in, climbing to the different altitude zones, and seeing the differences of lifestyles and customs in the different ethnic villages. We can help arrange your stay in native villager's houses.

However, there are no trains to this region. The limited buses from Kunming to Yuanyang take six hours to cover the distance. But we can provide private transport and driver for you to get there quickly and travel around to the various villages to meet the people.

Having a local guide and interpreter is important for helping you find the best places for you to discover and for communication. We can take you to visit with families and arrange for accommodations and native-style meals. We do the facilitation leaving you to do the exploration and enjoyment. Our guides can also help with purchasing teas and local crafts and gifts.

Private drivers and vehicles are very convenient in the Hani homeland.

Here are sample itineraries for you to consider if you wish to see the Hani while you see other regional highlights as well. If you want a trip specifically to see the ethnic Hani or to go to other places directly, we can provide such a tour for you also.

According to where you want to go and what you want to do in Hani regions, we can modify these tours for you and design a trip you'll enjoy. Send us your ideas. You'll receive a response within 24 hours. Inquiries are free.