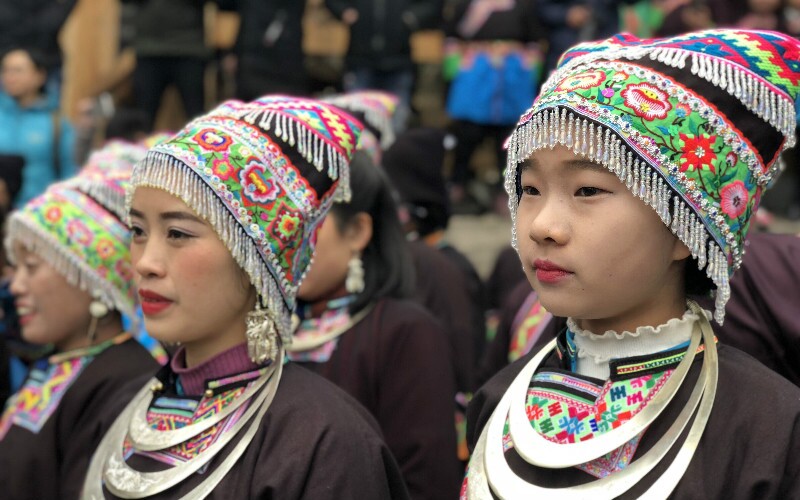 Dong girls in their silver outfits

The Dong (Kam) ethnic group has about 3 million members in China. They live among related ethnic groups in southwestern China in picturesque rural mountainous areas.

The are noted for their unusual wood architecture. UNESCO has placed 18 Dong villages on a tentative list of World Heritage sites in China. Of particular interest are the villages’ covered bridges called fengyuqiao ('wind and rain bridges'), and drum towers. These structures reflect traditional Dong life.

The women are noted for donning copious silver alloy jewelry on special occasions. Tourists like to visit their terraced fields and tribal villages and to experience their ethnic culture.

Where the Dong Live in China

Most of the more traditional Dong live in eastern Guizhou. The highest concentration of them is found around the ethnic town of Kaili where 1.2 million live around Miao villages. It is interesting to see the cultural contrasts of these two traditional groups.

Others live in western Hunan and northern Guangxi. About 300,000 live in Guangxi, mostly north and northwest of Guilin, in their own villages and mixed towns in hilly and mountain regions where the more numerous Yao and the Zhuang live.

Their villages are small. The biggest Dong village, Zhaoxing, has only 4,000 people.

The southern legends say they originated around the region of Guangdong.

Dong rice and pickles: They raise dozens of varieties of glutinous rice. This is one of the unusual aspects of their cuisine. They also like fermented sour pickles and hot pepper.

Beverages: A common Dong drink is "oil tea," 'you cha' (油茶 /yoh chaa/) that is made by sautéing tea leaves in oil. They then brew it and make a soup that becomes more nutritious when ingredients such as ginger, salt, chili powder, rice, peanuts or fried beans are added.

The Dong play lushengs at their Lusheng Festival.

The Dong people have always believed that songs are a way to remember and appreciate their origins. As a result of not having a written language until 1958, their stories have been preserved through the use of song and passed down from generation to generation.

The captivating thing about their use of song is that it was traditionally used to converse in daily life such as when working in the fields, offering wine, dating, and discussing individual and social events.

Dong songs are some of the most dynamic in Chinese Folk Music. They are performed by three singers.

The Dong people's favorite instrument is a wind instrument called the lusheng. Its complex form was developed by generations of musicians. Not only do the Dong people enjoy singing to this instrument, but they also dance to it in groups reaching a hundred at a time.

Dong ladies dress up in their ethnic costumes for their festivals.

Dong males and females have their own creative designs. The men wear a variety of sleeveless vests, straight-legged pants, and hooded scarves. The women wear various types of dresses including hand embroidered ones.

They use designs like fruits, flowers, birds, and clouds on their clothing (specifically the collars, wristbands, and edges of their clothing) to symbolize good luck, prosperity, and happiness.

They use vibrant colors. They especially like bright cyan colors. Other important colors are black, blue, white, and purple.

During the summer, they tend to wear white clothes. In the spring, autumn, and winter they wear cyan, blue, and black. And during special occasions and festivals, they dress in purple.

An important part of traditional culture is weaving and dying clothes by hand. Dyeing and weaving a wedding dress is an essential task in every Dong girl’s life. It is important in their culture.

For special occasions and festivals, Dong women don shiny silver alloy accessories such as hats, ornamental combs, necklaces, vests, hair pins, beads, and plaits. Some bracelets may weigh 700 grams or more (almost two pounds). The items might only have a low silver content, so it isn't as costly as it looks.

The second day of the second lunar month (late February or early March) is an auspicious day in the Dong tradition. On this day, according to local folklore, a dragon might rise from the water. The dragon can bring either good or bad luck to villagers, and everyone is eager to appease it.

To ensure good luck with the year's harvest, the Dong also present sacrifices to the god of agriculture who lives under bridges on the second day of the second month. Offerings include tasty foods such as rice cakes, meat, egg dishes, and succulent fish. Villagers picnic on the bridge in order to pay homage.

Celebratory music, using local instruments such as drums and flutes, is an essential part of the ceremony. People line the path of a parade of cows and bow to honor the dragon. After the parade of cattle, one cow is sacrificed, and all the villagers share in the meat that becomes part of the bridge picnic.

Dong tradition is steeped in nature. One of the most interesting customs is the multi-mark. The Dong take grass or other plants, bunch them together, secure them with a tie, and place them as signs and marks.

This multi-mark might be left in any location of significance. To the Dong, the multi-mark can signify love, danger, and even disdain. For example, a spray of grass placed near a broken board on a bridge serves as a cautionary warning.

Those who are interested in learning more about Dong marriage ceremonies can visit the Guizhou Museum of Marriage Customs of Ethnic Minorities.

The Dong made a unique contribution to China’s wooden architecture. They build without the use of nails, and they use whole tree trunks, erect multistory roofs, prepare excellent stone bases, and create noteworthy bridges.

All their work is hand made with exceptional skills. Their communities are full of buildings that endured centuries in their earthquake-prone environment serving testimony to their craftsmanship and the wood architectural technology. The Dong Minority are famous for their notable carpentry skills. The covered bridged and drum towers are outstanding.

The drum towers are pyramidal buildings about seven to thirteen floors tall. The wood in the structures are joined without nails.

Every Dong village has at least one drum tower in the center. It represents the Dong village and plays an important role in their lives. They hold meetings and activities in them.

Mapang Drum Tower, built in 1911, is an example. It the highest, most cherished structure in Mapang village. It is a place for the villagers to gather for social events and public meetings.

The Dong have a saying: “Where there is a river, there must be a bridge.” Their larger settlements have covered bridges called fengyuqiao (‘wind and rain bridges’ 风雨桥).

The Sanjiang Chengyang Wind and Rain Bridge was first built in 1916. It is an important community structure. It functions as a shelter for bad weather and a rest area. There are areas to sit and enjoy the beautiful view of the Linxi River, waterwheels, the Dong working on their fields, and the horizon of trees on the far hills.

Festivals unique to the Dong include Dong New Year, the Eating New Rice Festival, the Bullfighting Festival, the Fireworks Festival, and the Sisters’ Festival.

Dong New Year is celebrated during the eleventh lunar month from the first day to the eleventh day (in late November or December). It is different than the Chinese New Year and at a completely different time of year.

The Dong of Guizhou Province hold the festival at various dates varying from village to village. The celebration marks the end of the autumn harvest. Villagers relax and enjoy the end of a busy season.

Preparations for the festival start days before the celebrations begin. Houses are cleaned, villagers buy new outfits, and a feast – including savory and sweet rice cakes, in addition to pork and beef – is prepared.

One traditional Dong New Year treat is the “cold dish.” This includes tofu and special hand-made pickles. Once prepared, the bean curd and pickles are cooled outdoors before serving. In the Dong culture, this particular dish represents sacrifice to the ancestors.

The Dong celebrate when the first rice, or early rice, is ready for harvesting. The Eating New Rice Festival includes offering a sacrifice to ancestors. Fish, chicken, beef, and rice are presented as offerings.

After the ceremony, villagers traditionally enjoy a feast with entertainment that includes singing and sometimes even bullfighting.

The Sisters' Meal Festival honors the Dong women. On the eighth day of the fourth month of the Chinese lunar calendar (around early May), married Dong women go back to the home where their old family, their mother, and unmarried sisters live.

The women cook and celebrate this special time together. Married women bring home a black rice cake to their husbands as a sign of respect.

The festival involves much pageantry for both participants and spectators. The competing teams meet to inspect the bulls and determine the rotation for the bullfights. This often includes exciting one-on-one matches that are not to be missed.

Visiting Dong Villages with Us

Listen to Dong 'great songs' and see Dong drum towers with us.

The culture of the Dong is unusual, and the people are welcoming and hospitable. Visitors to the region will enjoy observing the traditional Dong way of life. They have tasty local foods and interesting festivals.

Several minority villages, hidden deep in the mountains and valleys, have retained their traditional cultures and lifestyles. In these villages, you can gain an in-depth understanding of the ethnic minorities’ cultures.

Having a local guide and interpreter is important for helping you find the best places for you. We can take you to visit with families and arrange accommodation and transportation, and our expert guides can translate for you so that you can experience their lifestyle, visit master craftsmen, and see superb handwork skills.

Here are sample itineraries for visiting the Dong.

Send us your requirements to modify the tours above or check out other existing Guizhou tours. Inquiries are free, and our responses are within 24 hours.