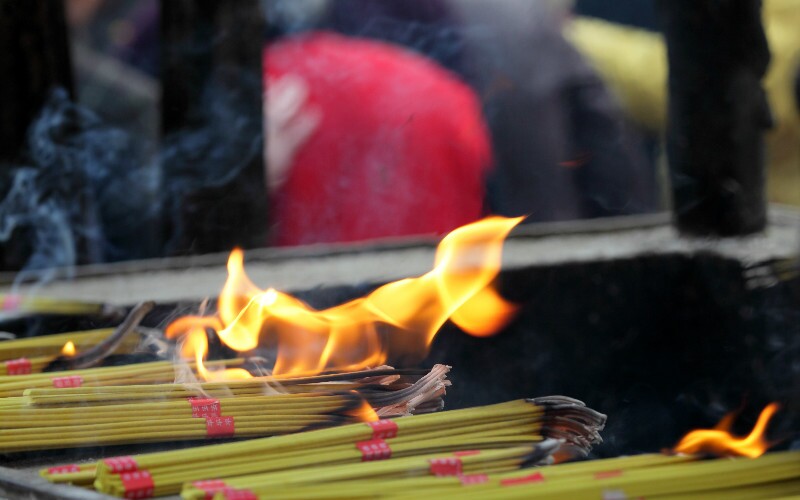 The Caotang Temple is a temple that honors a famous Central Asian Buddhist monk who translated scriptures at the site. The monk was named Kumarajiva (344-413). It is said that he was descended from an Indian Brahin family, but his father went to live in a kingdom called Kucha that controlled some of Xinjiang. At the Caotang Temple where he might have been kind of like a prisoner at least at first, he translated Buddhist texts for Later Qin Empire (374-418). He greatly influenced Emperor Yao Xing, and it is said that under Yao Xing's influence, 90 percent of the people in the Later Qin Empire became Buddhists. His ashes may have been put into a stupa that is about 7 feet tall that you can see at the Caotang Temple site. Kumarajiva had an unusual life, and at the Caotang (Thatched Hut) Temple, you may be able to learn more about his life.

The area around Xi'an was the location of the capital city of several empires in history. One of the empires was a comparatively small one called the Later Qin Empire. It only lasted a few decades. As the capital city area of several empires that was on the Silk Road to the Buddhist area of Central Asia, a lot of monks translated scriptures around Xi'an during a thousand year period. His work is considered very important for Chinese religion on par with the translation works of Xuanzang of the Tang era whose remains are honored in the Xingjiao Temple (兴教寺) that is about 16 kilometers south of Xi'an.

At the time Kumarajiva was born in Kucha, and the city of Turpan on the Silk Road was part of the Kingdom of Kucha. It is said that when he was 7, he had already committed large portions of Buddhist scripture to memory. His mother went to live in a monastery. He studied under famous teachers in Kashmir when he was young. The language of the kingdom is thought to have been Tochari that is now an extinct language. The Kingdom of Kucha was known for its devotion to the Buddhist religion and for its influence. People can still see the remains of monasteries, temples, and cave murals around Turpan. The paintings depict a multi-ethnic culture with South Asians, Caucasians and East Asians living together.

Due to his knowledge and intelligence, Kumarajiva became well known. The King of the Former Qin wanted to capture him to bring him back to his capital. So it is said that he sent an army to attack Kucha. But the general of the army settled there instead to set up his own kingdom. It is said that they imprisoned him. Then the Former Qin Empire fell to the Later Qin Empire. In order to free him and bring him back to Changan, the Later Qin Empire sent an army and defeated his captors. He was brought to Changan in the year 401. It is said that with the aid of the emperor, he set up a translation office and translated 300 sutras. It is said that his translations of important texts were more popular than those of Xuanzang of the Tang era because they were less exactly literal and more of a paraphrase that was easier to read and understand.

Travel: The Caotang Temple (Caotang Si) is in Caotangying Village that is about 30 kilometers or about 25 miles southwest of Xian. On weekends and public holidays, Tourist Bus No. 1 goes to the Caotangsi Station from the Big Wild Goose Pagoda.