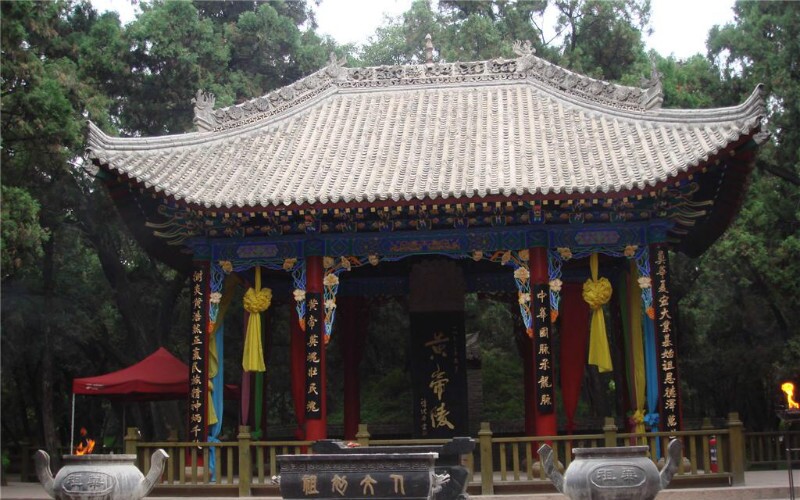 The Xuanyuan Temple is a modern temple that was built in the 1990s next to the Huangdi (Yellow Emperor) Mausoleum in the Yellow Emperor Mausoleum Scenic Area. The Xuanyuan Temple is also called the Huangdi Temple. A temple there was originally built during the Ming Dynasty era (1368-1644) to honor Huangdi who is the mythical first king and progenitor of the Chinese people. Together with the Huangdi Mausoleum nearby, the temple sits in a park that covers about 300 hectares or 750 acres. It is thought that the mausoleum site became active about 442 BC when the first offerings to Huangdi were made at the site. The whole site was destroyed during the Cultural Revolution, and the current big building was built in the 1990s. In the Xuanyuan Temple, you can appreciate the Temple Gate and other structures along with the main Renwen Chuzu Hall that is reached via a flight of many stairs with an open plaza in front, and you can also appreciate the cypress trees growing around it.

Huangdi was the mythical progenitor and founder of the Chinese nation. He is thought to have lived for about a hundred years from about 2697 to 2597 BC. However, the stories about his life are so incredible that he might be simply a myth. However, ancient Chinese historians didn't think he was mythical, and even modern rulers of China such as Sun Yatsen and Mao Zedong sent officials to pay homage at the site in the 20th century.

The Xuanyuan Temple sits near the front of the scenic park area, and the Huangdi Mausoleum is near the back. The Yellow Emperor Mausoleum Scenic Area has about 60,000 cypress trees called the Yellow Emperor Mausoleum Scenic Area. The scenic area covers about 300 hectares or about 750 acres, so it is quite big. The park area is divided into two parts called the Tomb Area and the Xuanyuan Area. The Xuanyuan area has several pieces of construction.

In the Xuanyuan Area, the Xuanyuan Temple was built in the 1990s. Whatever was at the site previously was destroyed during the Cultural Revolution. It is a very big structure that is said to be made completely of granite and that measures about 8,000 square meters. In the structure is a sculpture of the Yellow Emperor and a piece of wood called the Spirit Tablet that people can worship. There are also inscriptions that were written by China's modern rulers including Sun Yatsen.

Along with the big main hall, there is the Temple Gate, the Chengxin Kiosk, and the Stele Pavilion. There is also a big old cypress tree that was said to have been planted by Huangdi, but this seems impossible since scientists think the oldest living tree that was planted by a human is about 2,300 years old.

It is said that he met a supernatural creature that talked and taught him about hundreds or thousands of kinds of supernatural creatures. He also led a war against fierce monsters of 9 barbarian tribes, and his army won because he was able to call on the god of draught called Nuba. In the end, a dragon came, and he rode it. It is said that as people tried to hold him to the earth as the dragon was taking him away, they pulled off his clothes but couldn't catch him.

It is said that the Xia Dynasty and the Shang Dynasty clans were his direct descendants. After the first recorded sacrifices were made at the present Huangdi Mausoleum site in 442 BC, it became a tradition for emperors to go to the mausoleum themselves or send officials in their place. They would erect monuments or raise steles with inscriptions or make sacrifices. When Qin Shi Huang Di became the Emperor of the Qin Empire, he went there. Even modern rulers in the 20th century continued this tradition. So in the history of China, the area has been regarded as an important place.