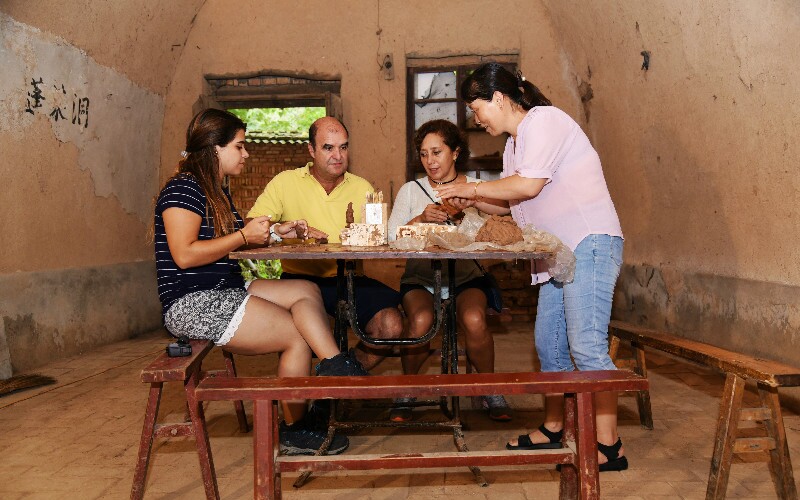 Here, we have provided information about the top five day trips from/in Xi’an. If you have limited time in Xi’an, these will help you experience the city in an efficient way. If you have more time, you can combine these day trips to enrich your experience.

It was constructed to accompany the tomb of China's first emperor to guard him in the afterlife. You can explore the site of the Terracotta Army to learn about how the warriors were made, how they have been preserved, and what their original colors were.

Your private guide will accompany you to a local cave dwelling where a craftsman makes terracotta warriors in a traditional way. You can learn traditional techniques that were used 2,000 years ago and try making a mini warrior yourself.

Xi’an City Wall is a landmark of Xi’an and it surrounds the old city in a large square-shaped area. You can take a leisurely stroll or cycle on the wall to enjoy its inner and outer walls, watchtowers, moat, and landscaped environs, as well as slightly elevated views of the city.

Experience the profound Muslim cultural atmosphere in the Muslim Quarter where you can see a number of ancient architectural buildings and find both traditional dishes and special snacks, such as roujiamo – marinated beef or lamb stuffed inside a freshly baked bun – and cold noodles, which can be made from rice or from flour.

Visit Shaanxi History Museum to appreciate the most typical items used during the Han and Tang dynasties. You will understand the impact that cultural exchange with other countries and regions had.

Go to an ancient academy to learn about China's traditional costumes. There, the teacher will tell you stories behind Hanfu. You can try one on to get a unique taste of the ancient culture. Dressed in Hanfu and wandering around in a beautiful garden, you will feel as though you have stepped back into ancient China from 1,000 years ago.

Luoyang is an ancient city with a long history and splendid culture. It was once the capital city for a period during the Tang Dynasty. It takes 1½ hours to get to Luoyang from Xi’an by bullet train.

Hundreds of thousands of statues and caves are carved and dug into two mountains sprawling over 1 kilometer (0.6 mile) from south to north. The site is a man-made architectural marvel.

You can also go to the cradle of Chinese Buddhism - White Horse Temple. See the architectural style used for Chinese temples and watch people praying. Seeing the statues of the Eighteen Arhats in the Hall of Mahavira is the highlight - they are invaluable treasures in White Horse Temple as well as in China.

Mount Hua (Huashan) is one of the five sacred Taoist mountains in China. It will take 1½ hours’ drive to get there from Xi’an. A variety of temples and other religious structures nestle on its ridges and peaks.

Mount Hua is well-known for its sheer cliffs and plunging ravines. Because of this, it is known as "the most precipitous mountain under heaven" and attracts many hikers for the challenge of climbing it. You can also take a round-trip cable car ride to get up and down the mountain, and can enjoy the scenery along the way.

It has five peaks: North Peak, Middle Peak, East Peak, West Peak, and South Peak. East Peak is the best place for watching a sunrise. Walking on the cliffside narrow plank at South Peak is a challenge for thrill-seekers.

Pingyao is a well-preserved Ming Dynasty town. The town features ancient buildings and flagstone streets, and the locals have a traditional lifestyle. It takes 3 hours to get from Xi’an to Pingyao by bullet train.

There, you can visit the Rishengchang Former Bank – the first draft bank in China – and learn how it operated. Visit Armed Escort Company Museum, which highlights a special business - the protection of the tangible currency. You can go up to the ancient city wall at dusk and have a glimpse of the town before darkness arrives.

Explore a Lively Xi’an with Us

Let us tailor-make your Xi’an tour according to your interests and needs. We will not simply lead you to the attractions and tell you about the city’s history, which you can Google. In our tours, you will experience the culture that comes alive in a vivid way.