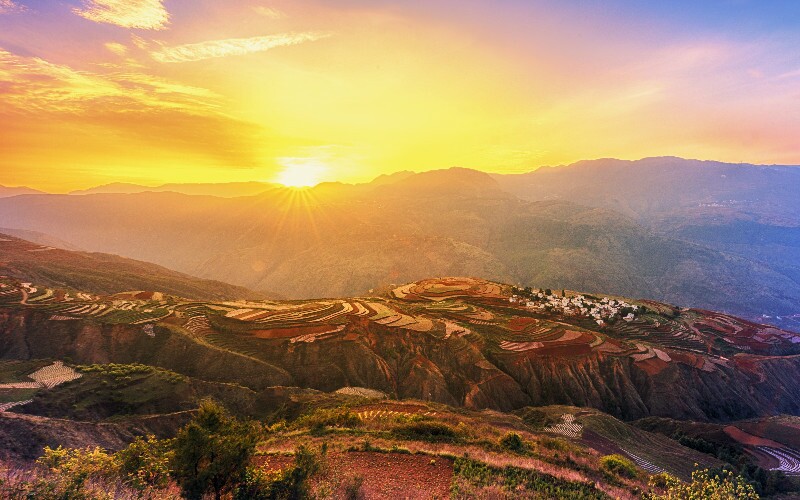 Yunnan enjoys a mild climate with lots of pleasant weather but, due to its varied terrain, the weather is also diverse in different regions.

The Main Features of Yunnan's Climate

Yunnan has high mountains bordering Tibet in the north/west, a hilly 1,000-meter-altitude plateau in the east, and a tropical zone in the south.

Yunnan has distinct dry and rainy seasons. November to April is the dry season, when there is abundant sunshine and solar radiation is felt more. Do not forget to take skin care products, such as sunblock and sunglasses if traveling during this period.

The rainy season typically runs from May to October. Most of the rainfall is between June and September. During this season, the temperature may drop quickly along with the rain. So, apart from an umbrella or other protective rain gear, you are recommended to take a thin coat and long trousers.

Yunnan is a mountainous province. The tall mountains of the west exhibit an almost full range of climate zones, from a subtropical zone at the base, to a temperate zone in the middle, to a frigid zone near the top.

There is an old and accurate saying there that, "You can enjoy all four seasons on the same mountain, where each of these four seasons is only a few miles from the others."

If you had to pick a single province in China that would expose you to the greatest variations in topography and climate, it would have to be Yunnan Province. Yunnan's varied terrain and tropic-straddling location result in its diversity of landscapes and weather, and the best times to go depend largely on what you want to see and which part of Yunnan you want to visit.

Generally speaking, the weather in most areas of Yunnan is mild in winter and cool in summer. It is suitable to visit Yunnan all year round, especially the major tourism cities like Kunming, Dali, Lijiang, and Shangri-La. See our local weather pages to learn more about the weather in major tourist cities in Yunnan and destination-specific travel tips.

Yunnan in Spring (March to May) — See the Flowers

Our Most Popular Yunnan Tours

Want to visit Yunnan, but finding it hard to decide when to go? Contact our travel experts who will give you professional suggestions and help you to tailor-make a Yunnan tour.

Here are our most popular Yunnan tours for inspiration: