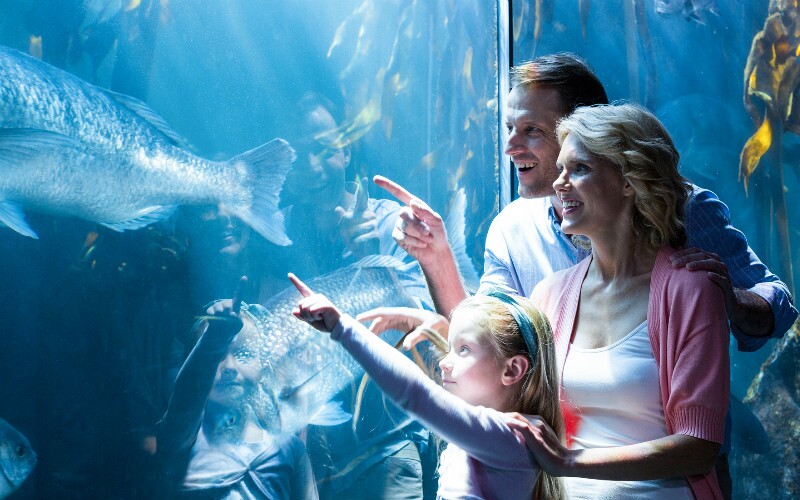 The largest aquarium in China is the Beijing Aquarium (北京海洋馆). It is notable because there are many tanks with different species. There is also a notable performing dolphin and seal circus act similar to the one at Sea World in the US.  Humans ride and jump off the dolphins, and the animals do tricks and play with balls. Both kids and adults will find the aquarium interesting, informative and fun.

There is a large tank and many smaller tanks. Altogether, you can see a broad selection of the world's marine life in the various tanks. The aquarium doesn't only house marine life. There are also freshwater species, tropical plants, and amphibious mammals. The exhibition halls each feature a specific kind of act, climate zone, or kind of animal. 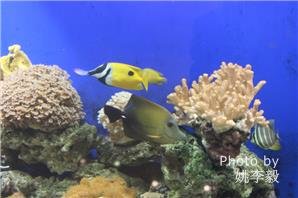 Rainforest Adventure is the first large hall you come to. It is an indoor garden with rainforest plants and freshwater species from the Amazon River basin of South America.

Shark Hall contains various species of sharks that swim around.

Whale and Dolphin Bay contains mammals such as whales, dolphins and sea lions.

At the petting pool, people can touch various kinds of animals such as a turtle and small sea animals.

The Seabed Tunnel is about 120 meters long. It takes people through a mockup of a reef with fish swimming around.

The Ocean Theater is a pool with spectator seating where you can watch the dolphins and sea lions perform. You can watch people riding the dolphins, standing on them, and diving off them. The dolphins seem much stronger and quicker than the people who ride them.

The large aquarium in conveniently located in central Beijing next to the Xizhimen Metro Station. It is in a place with many other tourist attractions such as the Beijing Zoo that is next door.

1.5 kilometers or a mile southwest is the Beijing Planetarium. Two kilometers west of the aquarium is Purple Bamboo Park. The Beijing Exhibition Center is about 600 meters southeast. While on a trip to the the aquarium, consider these other notable attractions on your visit.

Another large aquarium in Beijing is called the Pacific Underwater World. It has a main tank and an 80 meter underwater tunnel. It is part of the CCTV Tower complex, one of the tallest structures in Beijing. Along with seeing the aquarium, you can see the city from the top of the tower and eat in the revolving restaurant. It is 4 kilometers (2.5 miles) southwest.

Let us help you visit the Beijing Aquarium and other notable sites on a personalized Beijing tour! Contact us.