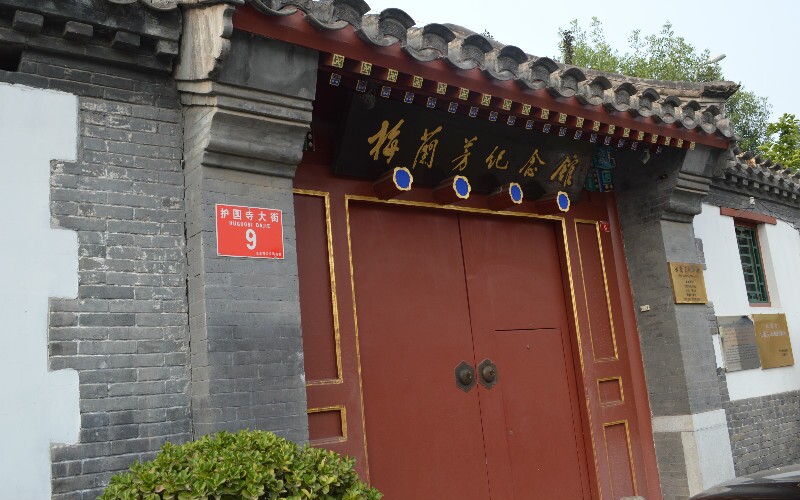 There are tens of thousands of artifacts and mementos about Mei Lanfang’s life and his roles in the Beijing Opera. There are scripts of plays, books, photographs, letters, painting, and lots of other things. Here you can appreciate the Chinese Opera performing artist Mei Lanfang and Peking Opera in general.

Mei Lanfang was an important Beijing Opera actor who played female roles or “ban” roles in Chinese. In traditional opera, there were only male actors but no actresses. He was famous not only in China but around the world for acting. The Mei Lanfang Memorial Hall is his former house, and it is filled with thousands of mementos and things on display. While visiting the museum, you can learn about his life and the Beijing Opera.

Mei Lanfang spent the last decade of his life in the house. He moved in after WWII. He died in 1961. Premier Zhou helped to establish the Mei Lanfang Memorial Hall. His wife and children contributed a lot of personal mementos such as photographs and letters. Deng Xiaoping made a plaque for the museum. It can be seen on the door. It says, “Mei Lanfang Memorial Hall.” Mei Lanfang was known as one of the great actors of the Beijing Opera and was honored by modern leaders while he lived and when he died.

Beijing Opera (京剧) is a form of traditional Chinese theater that very popular with the Qing Dynasty court and that was also popular among China’s modern rulers. It combines music, vocal performance, mime, dance and acrobatics. It arose in the late 18th century and became fully developed and recognized by the mid-19th century. The form of art was disfavored by China’s rulers during the Cultural Revolution.

Introduction to the Museum

There are four showrooms. The first showroom in the outside yard displays selected pictures and materials about his artistic life and social activities. The inner second showroom displays some theatrical costumes, stage property, cultural relics and documents that he used in his career. The third showroom displays calligraphy, paintings, and gifts that people gave him. Another showroom is used for special exhibitions.

Mei Lanfang (1894-1961) was born in Tai Zhou in Jiangsu Province. He was born into a professional theater family. He was born at the time that the Qing Empire was breaking up and was being overthrown. Before WWII, he toured overseas, and he helped to make Beijing Opera known to Western entertainers such as Charlie Chaplin. When the Japanese conquered Beijing, they wanted him to continue as an actor performing under their government, but he refused.

In 1949, he was honored by the government of China. After 1949, he was named Director of the Beijing Opera Theater, Director of the Chinese Opera Research Institute, and Vice-chairman of the China Federation of Literary and Art Circles. He also was named a government official. He is thought to have worked very hard, and he also studied martial arts. He developed what is known as the Mei Lanfang School of Peking Opera.

The Mei Lanfang Memorial Hall is within two kilometers of Prince Gong’s Mansion, the big Beihai Park with its large Beihai Lake, the Deshengmen Watchtower, and the Beijing Drum Tower. While in the area, if you want to have a meal and do some tourist shopping during visit, you can head over to the nearby Skewed Tobacco Pouch Street that has both international and Chinese restaurants and shops that sell tourist items from around Asia. The shopping street is about two kilometers away to the northeast across Houhai Lake.

China Highlights can help you customize a tour to visit Mei Lanfang Memorial Hall and other highlights in Beijing.

Address: No. 9 Huguoshi Jie, Xicheng District, Beijing. 梅兰芳纪念馆, 西城区护国寺街9号.
You can show the above address to a taxi driver. If you want to take a bus, a number of buses including Bus No. 13, 42, 107, and 111 go to Chang Qiao Station. Then walk northwards about 500 meters.