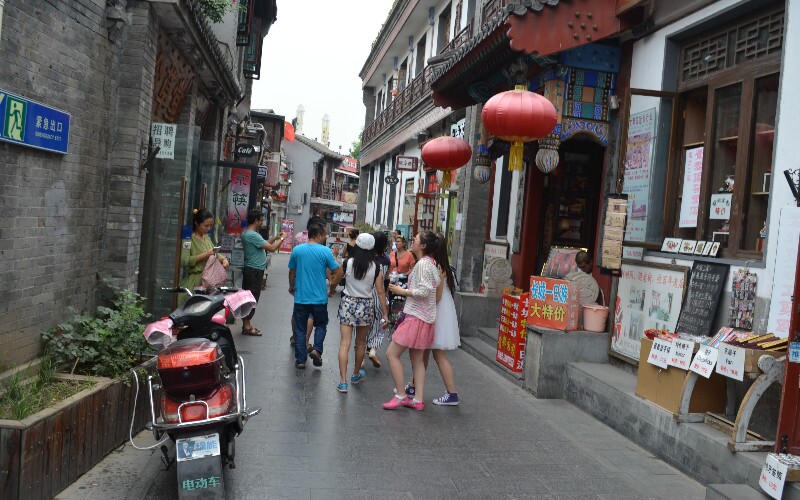 The Skewed Tobacco Pouch Street (烟袋斜街) is a well known narrow street or hútòng (Chinese: 胡同) in Beijing that is known for the tobacco stores, bars, and hotels. It is near the Beijing Drum Tower and was known in the past as as an artists and artisans’ street specializing in jade pieces, calligraphy, paintings and tobacco products. The street is called Skewed 斜Tobacco Pouch (Pipe) 烟袋 Street 街 because the street crosses diagonally and tobacco was sold there. Now the narrow street is under national protection as a famous “commoners” street, and it has been rebuilt in a traditional style of architecture and is full of international restaurants and tourist shops selling international products.

The Skewed Tobacco Pouch Street was awarded the designation as a Famous Street of Chinese History and Civilization by the Ministry of Culture and the State Administration of Cultural Heritage in November of 2010. It is now a tourist highlight that presents a typical commoner street that was known historically for its craftsmen and tobacco shops. While many landmarks in Beijing are of China’s imperial heritage, this street preserves the character of a street of the common people of Beijing and highlights some of the traditional customs. While visiting the Skewed Tobacco Pipe Street, you can shop for tobacco products and all types of tourist products, eat at the restaurants, stay in the hotels, and go to the coffeeshops and bars.

This street is mainly now a tourist shopping street. It is reminiscent of West Street in Yangshuo that is known as a foreigner’s street in that famous international tourist getaway. This is a place in Beijing where tourists come to buy things like bronze tobacco pipes, jade pipes, tobacco, Indian clothes, Chinese ethnic handicrafts, products from Dali and Lijiang, and Tibetan products. There are shops selling all these things and more as well as international restaurants, Chinese restaurants, and tea shops.

If you want to buy pipes or tobacco products, on the north side are two tobacco stores: one called Heng Tai which means being prosperous permanently and another called Shuang Sheng Tai which means being prosperous stably. So the competition there may be tight. These stores sell not only finished tobacco products such as whole pipes but also the mouth pieces for tobacco pipes or just the bowls. The mouth pieces are made of different materials such as hardwood, jade, porcelain and other  materials. The bowls are made from yellow bronze, white bronze, marble and other materials. There are many ethnic styles and sizes to choose from, including Mongolian bongs and the traditional Chinese bongs, etc. Along with them, tobacco bags of different styles are also offered in these stores. These include small bronze tobacco containers of Shang Xi province. Check out the very big tobacco bag outside.

Tourists are buying antiques in a antique store of the Skewed Tobacco Pouch Street.

The Antiques Store is called Yun Bao Zhai. After the fall of the Manchu Qing Dynasty, Manchu people living in Beijing took to selling off their personal possessions and antiques because they lost their government support. So the street came to be known as a place to buy antiques before WWII. Now you can buy many different antique articles or antique lookalikes.

There are many things to see nearby. The street is near Houhai that is a pond, and to the northwest is the Deshengmen Watchtower. Across the Houhai pond is Prince Gong’s Manor that is a garden. Just to the east of the street is the Drum Tower, with the big Beihai Lake and the big Beihai Park about two kilometers or about a mile southwest. So if you want, you can take some walks after shopping and eating and see the highlights in the area.

China Highlights can help you customize a tour to visit the Skewed Tobacco Pouch Street and other highlights in Beijing.