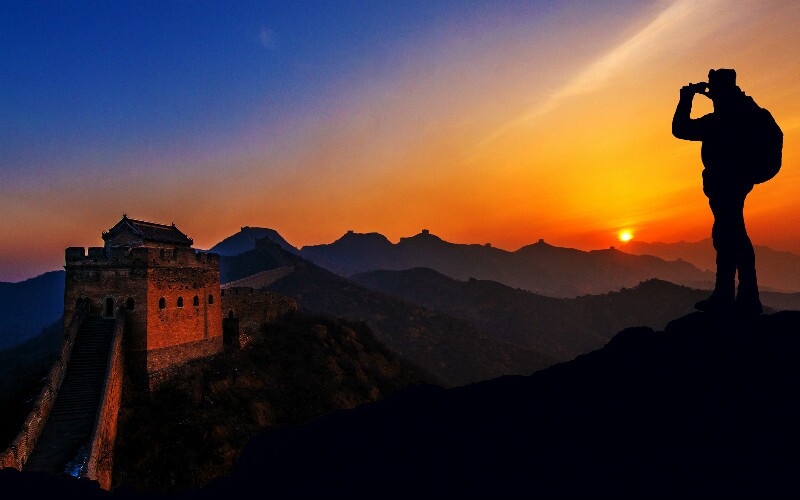 The Great Wall of China not only served as a military defense system, but also carries a contribution to China's profound literary culture, through the sayings, proverbs, and idioms associated with it.

Sometimes translated "He who doesn't reach the Great Wall in no hero", it was originally a line from a Mao Zedong poem. See Great Wall Culture for the full poem.

It has come to mean that: to get to their goals admirable people must overcome difficulties.

If you come to China and visit the Badaling or Mutianyu section of the Great Wall, you'll see a stone engraved with this sentence in Chinese. (A li is half a kilometer. The saying is often abbreviated to the first part: 万里长城永不倒.)

The Great Wall here refers to the indomitable spirit of the Chinese people.

3. United we stand — the Great Wall is on peoples' hearts.

Or: "If you want to know where the Great Wall is, it's at the bottom of people's hearts."

It means: if the people make a concerted effort, and their wills unite like the Great Wall, the people will overcome all troubles together.

4. No pain no gain — like building the Great Wall Meng Jiangnϋ was a legendary lady, who cried so desperately when her husband died building the Great Wall, that the section where he was buried fell down.

It means that big projects are costly, like building the Great Wall. They require thousands of people's hard work and sacrifice.

It means that the amount of hardship someone has endured is immense, like the centuries of weathering the bricks of the Great Wall have endured.

6. Time is the test of greatness — the First Emperor built the Great Wall… The First Emperor accomplished the great feat of joining the Great Wall on China's northern frontier, an act that has had repercussions through history.

The merits of an action are judged by later generations. It can't be known how great an act is at the time, but it will be known later.

Literally "5,000-km-long wall", it was first used to describe the Qin Dynasty Great Wall, the first united northern frontier wall. It was not intended to state its length, though it was in the right ballpark, but more to say: "the Great Wall is now very, very long".

It is a traditional longer name for the Great Wall of China. 万 can mean 'innumerable' or 'all'. Now any phrase with 万里 ('10,000 li') in it can be assumed to refer to the Great Wall's great length and completeness. A li is half a kilometer, and wan is often figurative for 'many', so it could be translated "many miles of magnificent fortified passes".

It's an allegory for sturdiness and unbreakability. It can also be used as a glorific expression of praise.

9. Enemy at the gates! — soldiers below the Great Wall

Its meaning is that the enemy soldiers are already amassing at the foot of the Great Wall, so quickly mount a defense before it's too late.

It's synonymous with "enemy at the gates", a call for immediate action. It's also allegorical for something being at a critical juncture. Great Wall sentries burned wolf dung to send signals from beacon towers when enemies were coming. And, in Chinese, 'four' means on all sides. So, it means 'smoke signals are rising on all sides'.

It's an allegory for being in the midst of a battle.

11. Strength in united numbers — a Great Wall of people

An idiom for "unity is strength", the "wall" is referring to the Great Wall, which is synonymous with unity and strength in China.

It means that if many people can get together with the same mind they will become a formidable force. This idea is most famously worded in China's national anthem.

12. Far from home — like the Great Wall's frontier forts The Great Wall stretched thousands of miles from China's capital to defend the remote frontier land of the Silk Road. To experience such loneliness, you may want to travel to Jade Gate Pass.

It's an idiom for a very isolated position, having to rely on one's self, and being unable to get external help.

Discovering More of the Great Wall with Us

Our experienced and knowledgeable guides are chosen for their English proficiency. They can relate and explain things like these Great Wall sayings, and many other interesting things you may want to know. If you have a Great Wall tour with us our expert guides will enable you to delve deeper into Chinese culture. These Great Wall itineraries are particularly geared to give more cultural insights:

If you want to know more, please contact us.