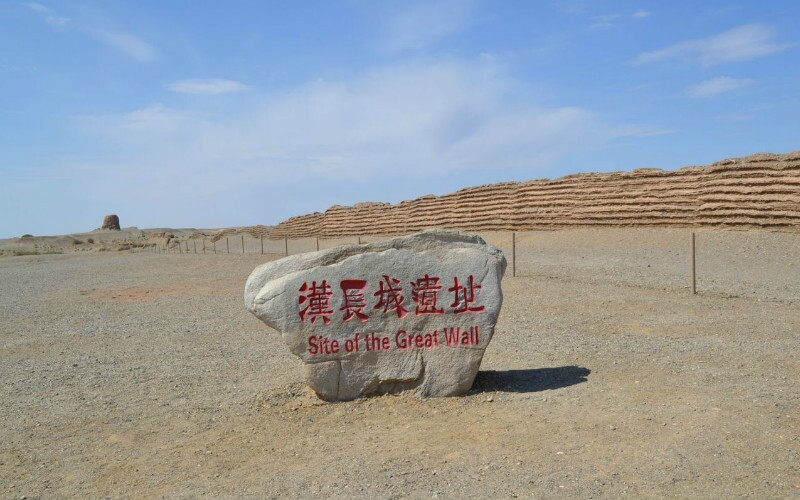 The Great Wall of China in the Han Dynasty

The Great Wall in the Han Dynasty was the longest version of the Great Wall ever. It starts from today's North Korea in the east and extends to Xinjiang Uygur Autonomous Region in the west, with a total length of over 10,000 kilometers.

About The Han Dynasty The Han Dynasty (206 BC – 220 AD) was an important era in the development of Chinese history. It started after the unification of China in the short and harsh Qin Dynasty. We have separate information on the Qin Dynasty Great Wall.

It was a more stable period when China expanded its territory, and traded with the west via the Silk Road.

The Han Great Wall on the Western Frontier

The Great Wall of the Han Dynasty was mostly built by 121 BC, in order to defend against harassment from the Xiongnu (the Mongol Empire of the time), consolidate frontiers, and protect trade relationships with countries in West Asia. The Han Dynasty Great Wall in the picture was built by using rose willow, reeds, sands and gravel.

The Han Dynasty extended the Great Wall west in the Gansu/Hexi Corridor. There are sections in Ejinaqi in today's Inner Mongolia, and Jinta, Yumen, Jiayuguan, Guazhou, and Dunhuang in Gansu.

Further beacon towers, castles, and smoke towers were built on the Silk Road until Lop Nor (Lake Bosten in Xinjiang).

In order to build using sand and gravel in the desert areas the Han Dynasty builders adopted a very special type of construction. They first wove out basic frames using rose willow and reeds, and then they filled the frames with gravel. After that, they piled them up in layers.

Groundwater with high salinity was used to consolidate the sand and gravel. Though the Great Wall in the Gobi Desert has experienced two thousand years of erosion, it still stands. The forts are magnificent against the barrenness.

There were three main types of construction: loess (yellow Gobi Desert soil) rammed in layers; sand and stones in rose willow and Hu poplar frames; and reed adobe when clay soil that would bind was available.

The best sections of the Han Great Wall to visit are in the desert around Dunhuang. Dunhuang is best visited as part of a Silk Road tour. The construction of the Great Wall at Dunhuang did not involve bricks and stone blocks, but materials that were produced locally.

At North Lake and West Lake in Dunhuang there were large amounts of rose willow, reeds, luobuma, and Hu poplars. People used their branches and twigs to form the latticework of the Great Wall, and filled the frames with sand and gravel.

Every 5 km (3.1 mi), a beacon tower was built along the Great Wall that was guarded by a garrison of soldiers. In emergency situations, the soldiers generated smoke during the day and held torches at night to pass messages along the wall. The smoke and the fire could be seen from distances of up to 15 km from the towers.

Today, about 80 beacon tower relics remain in Dunhuang County. Among them, the best preserved one is at Yumenguan - 'Jade Ga te Pass'.

Beacon tower constructions in the Han Dynasty were usually wide at the base and narrower at the top, square-based and tapered, and they were mainly located well inside (south of) the Great Wall.

Beacon towers were usually built on higher terrain, and they usually measured over 7 meters high, though some of them might have reached about 10 meters. On top of each beacon tower were parapet walls and a small room for signaling supplies. The relics of collapsed roofs and rooms can still be seen today. Read more about the Great Wall near Dunhuang.

The Great Wall section in Yumen County was over 70 kilometers, with a well-preserved section measuring about 20 kilometers. The relics are 0.3–2.5 meters (1–8 feet) high.

Rose willow and needlegrass sandwiched sandy layers of about 20–40cm (8–16"). It is the best preserved section of the Han Great Wall in the Hexi Corridor. Although it has lost its original splendor through erosion, its rough profile can still be observed.

Because of its location among the mountains and consequent lack of human interference, parts of the Great Wall section are well-preserved. Mountain gulleys have caused gaps in the wall, dividing it into 15 sections, with a total length of 36 kilometers.

There is a pass in Yumen Couty called Yumen Pass. It was one of the two important western passes (the other being Yang Pass) of the Great Wall in the  Han Dynasty. Read more about the Yumen Pass.

The Han Dynasty Great Wall at Chengde, north of Beijing

The Han fortifications in Fengning, Luanping, Longhua, and Chengde counties of Chengde Prefecture (Hebei Province) were linked with multiple roads and beacon towers, built along the rivers and mountains. Great Wall sections were only built in a few places, with beacon towers generating the main line of military defense.